Champions of the Flyway is a major new international bird race taking place in Eilat, Israel – one of the world’s most spectacular migration hot spots and rewarding birding destinations.

Competing teams from around the world will try to find, identify and log as many species as possible – as they go head to head in an intense 24 hour contest to win the coveted title “Champions of the Flyway”.

The birders taking part are of many different nationalities and represent a huge variety of businesses, conservation organisations and bird clubs.

On April 1st 2014, all will line up together in Eilat with a common purpose – to celebrate the miracle of migration in this spectacular part of the Great Rift Valley and to help protect its future throughout the Africa Eurasia Flyway. 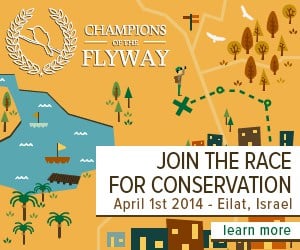 The race teams will initially meet in Eilat on March 28th and then spend three days familiarizing themselves with the course and birds, in preparation for race day. Champions of the Flyway is a focal event during the famous annual Eilat Bird Festival.

Because of the widespread, illegal killing of migrating birds in Southern and Eastern Europe, Focusing on Wildlife has put together its own team – the ‘Sprinters’ – to raise awareness and raise funds for the protection of migrating birds along their amazing flyways.

The Focusing on Wildlife “Sprinters”

Please help the cause by making a donation to BirdLife on the following link:

The Champions of the Flyway bird race is being staged by The Society for the Protection of Nature in Israel (BirdLife’s national Partner in Israel) and is a BirdLife International Migratory Birds & Flyways Programme initiative.

If you’re a birding enthusiast and have 2 or 3 friends, who would also like to take part in this exciting event, then join the “Race for Conservation” and sign up your team today.