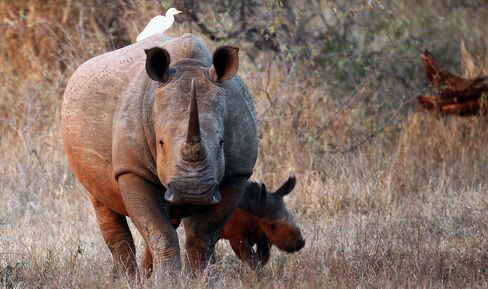 Rhinos are on a path to extinction, possibly within a decade. Thank the losers who ingest their horns, hoping for a little help in the sack.

There are maybe 20,000 rhinos left and they don’t have much chance against poachers with AK-47s and saws feeding an Asian market that prices these medically useless horns at $95,000 a kilo. South Africa’s immense Kruger National Park is especially vulnerable with hired guns entering from neighboring Mozambique.

In a remarkable airlift masterminded by the conservationists Dereck and Beverly Joubert, 200 rhinos are being flown from South Africa to the safety of Botswana. The complex process involves the Botswana army and a chartered Ilyushin cargo plane capable of liftoff with 10 of these crated, stolid 3,000-pounders (wearing eye masks).

No endangered beast could hope for more articulate and photogenic advocates than the Jouberts, both National Geographic Explorers-in-Residence.

Their documentaries and books on Africa’s big cats and other keystone species have won numerous awards, including seven Emmys and the Presidential Order of Meritorious Service by Botswana President Ian Khama.

The couple showed clips from the airlift over lunch at Bloomberg headquarters in New York.

Dereck: Botswana has a “shoot to kill” policy on poachers. It’s not a “shoot on sight.” The military surrounds a camp, you must put down your guns. If anybody lifts a firearm, they don’t try and wound the person; they just shoot everybody.

It’s a very harsh but very effective way to do this.

Hoelterhoff: Can a rhino live without the horn? Do they grow back?

Beverly: Very slowly. It depends where it’s cut off. Conservationists for some time cut the rhino horn off about five or six inches from the base, believing that if you cut off the horn, the animal won’t be poached. But now at $95,000 a kilo, even a bit of rhino horn is worth killing the entire rhino for.

Just recently, we’ve learned that baby rhinos without horns are being killed for their mucus, and their mucus membranes, because there is belief that mucus has some sort of potency that grows this magnificent horn later on. It’s completely ridiculous.

Hoelterhoff: Who buys this stuff?

Dereck: There’s a massive market in Asia for rhino horn, though there’s no medicinal value at all. It’s like chewing your hair or your fingernail. They’re selling it for everything from a virility booster to a cancer drug or to cure a poisonous bite from a sea snake.

Dereck: We found that the young generation is keen not to be associated with this destruction of animals and the environment. Many don’t know that elephants are killed for their tusks — that they don’t just fall off. Or that the rhino is slaughtered for these worthless concoctions.

Rhinos crated before their release. Beverly Joubert via Bloomberg

Hoelterhoff: What kind of animal are they? Do they have a family life like elephants?

Dereck: Generally not. You do find females and calves hanging out together. The mothers are very, very protective. For the first 18 months the calves are physically touching their mother. They walk next to each other wherever they go.

Hoelterhoff: Daddy is not part of the picture?

Dereck: He’ll have three or four females and calves and then he just moves between them. But even then, when they interact, it’s a gentle interaction. He’ll come up and greet the female and the calf, spend some time with them and leave.

Beverly: Every now and again, you get these weird aggregations of females. Suddenly four or five females start hanging around with their calves like little family groups going to the mall. The calves play and then they wander off in different directions.

Dereck: The white rhinos are very, very gentle beings. In fact, I liken them to the Labradors of the bush. The black rhino is somewhat different, like bull terriers. They just charge everything, put dents in vehicles and break trees and chase people around.

Hoelterhoff: Despite anti-poaching units in South Africa’s Kruger Park, a lot of animals are still butchered.

Dereck: There has to be some corruption with some game ranger or something for them to be so heavily poached. A lot of money has gone in to try and help from various donors, and they still have the situation. There are thousands of poachers working in the Kruger National Park.

Hoelterhoff: How are the animals killed?

Dereck: It’s interesting. Originally poachers would go in with AK-47s and find a rhino and then just pepper it. But because anti-poaching units have gotten better and better, there’s this arms race. So the poachers now have high powered hunting rifles with silencers on them.

You can rent silencers out of Johannesburg, so you can go and poach and then give it back.

Hoelterhoff: A few weeks ago, a Texas hunter paid $350,000 to shoot an endangered black rhino in Namibia, claiming it would help conserve the others. Is that as bogus as it sounds?

Dereck: It is. Very little of that cash goes to conservation. In fact the jury is out on if any does. I would rather have seen that money being donated to conservation with a pure heart and not seeing an animal forfeit its life in return. This completely overlooks the fact that rhinos have a function within the ecosystem, feeding down the vegetation to keep it refreshed and alive. Life in nature is complex and connected and for a reason.

(CORRECTION: An earlier version of this story was corrected to indicate that there are maybe 20,000 rhinos left.)

Manuela Hoelterhoff is executive editor for Global Cities at Bloomberg. This interview was adapted from a longer conversation.

To donate to Rhinos Without Borders, see https://www.trevolta.com/trips/rhinos-without-borders-25972

This article was first published by Bloomberg Business on 11 Jul 2015.