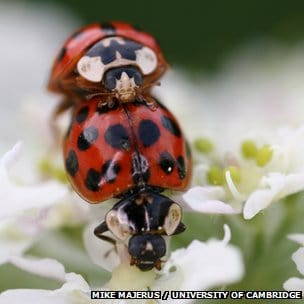 Ladybirds native to the UK and other European countries are declining fast as the invasive harlequin species spreads, scientists have shown. Researchers found that seven out of the eight native British species they studied have declined, with issues also identified in Belgium and Switzerland.

The harlequin is an Asian species brought in for pest control, but which has now become a pest itself. Some UK species are “near the threshold of detection”, the scientists write.

Scientists are warning of potential damage to ecosystems’ “resilience”. In an unrelated study released at the same time, researchers found that the colour of ladybirds shows how toxic they are to predators. The harlequin (Harmonia axyridis) was first spotted in Belgium in 2001, and in the UK and Switzerland in 2004.

Scientists have warned since it appeared that native species were likely to be vulnerable, but this study, reported in the journal Diversity and Distributions, measures the scale of the impact and ties it squarely to the alien’s arrival.

“This study provides strong evidence of a link between the arrival of the harlequin and declines in other species of ladybird,” said Helen Roy from the Centre for Ecology and Hydrology in Wallingford, Oxfordshire, who worked with colleagues at Anglia Ruskin University in Cambridge as well as Belgian and Swiss research institutes.

“This result would not have been possible without the participation of so many members of the public gathering ladybird records across Britain, Belgium and Switzerland.” The UK database contains nearly 90,000 observations of ladybirds made between 2006 and 2010. The Belgian sample is somewhat smaller but began earlier.

Surveying the same batch of species in the same locality year after year enables researchers to make a good estimate of the rate of change. And for some native species, the rate is spectacularly high.

Numbers of the two-spotted ladybird (Adalia bipunctata), they estimate, fell by 44% in the UK and 30% in Belgium in the five years following the harlequin’s arrival. The harlequin and the two-spot share a habitat of deciduous trees and as the harlequin is larger, it is able to out-compete its smaller rival for food, and prey on its larvae.

The only UK species apparently unaffected by the harlequin’s arrival was the seven-spotted ladybird (Coccinella septempunctata) which is of a similar size and does not share the same habitat. Declines were also seen in Switzerland, but the data was not as comprehensive.

The researchers warn that potentially serious consequences lie ahead if the harlequin continues its rampant march. “Ladybirds provide an incredibly useful ecological function by keeping aphids in check,” said Tim Adriaens, from the Research Institute for Nature and Forest (INBO) in Belgium.

“At the continental scale, the arrival of the harlequin could impact on the resilience of ecosystems and severely diminish the vital services that ladybirds deliver.” Currently, there is no way of selectively killing the harlequin. Gardeners are advised to take care if they decide to squish them, as their highly variable colour pattern means they can be hard to distinguish from native species. Red signal

Another reason why the harlequin is able to out-compete native species appears to be because it is more toxic to birds and other animals that may try to eat it. Working with the seven-spot, researchers discovered that individual ladybirds with red wings are more toxic than others.

As they detail in the journal Functional Ecology, the reason seems to be that these individuals are well-fed, enabling them to produce relatively large amounts of their defensive chemicals and the red pigment that probably warns predators off. “Producing warning signals and chemical defences is costly, so when individuals lack access to an abundant supply of food they produce relatively weak chemical defences,” said lead scientist Jon Blount from Exeter University.

There is no explicit link to the harlequin study; however, if the harlequins are eating better than the native species, as appears to be the case, that could increase the difference in toxicity between the natives and the invaders.