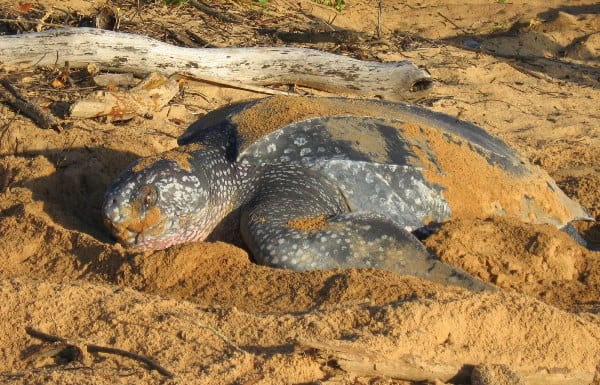 The world’s largest sea turtle, the leatherback (Dermochelys coriacea), is vanishing from its most important nesting sites in the western Pacific, according to a new study in Ecosphere. Scientists found that leatherback turtle nests have dropped by 78 percent in less than 30 years in the Bird’s Head Peninsula on the island of New Guinea. Worryingly, these beaches account for three-fourths of the western Pacific’s distinct leatherback population; globally the leatherback is listed as Critically Endangered by the IUCN Red List, the highest rating before extinction.

“Sea turtles have been around about 100 million years and survived the extinction of the dinosaurs but are struggling to survive the impact of humans,” co-author Thane Wibbels with the University of Alabama at Birmingham (UAB), told Reuters.

Leatherback sea turtles, which can weigh up to 900 kilograms (2,000 pounds), are split into three distinct populations: the Atlantic, the eastern Pacific, and the western Pacific.

“In comparison to the Atlantic, where several nesting populations have been increasing in recent years the status of leatherback populations in other oceans is of greater concern,” write the researchers in the new paper. They found that nesting in Bird’s Head Peninsula have dropped from 14,455 nest in 1984 to 1,532 nests in 2011.

The scientists believe that leatherbacks are vanishing due to human harvesting of eggs, invasive dogs and pigs eating their eggs, and leatherbacks being killed as bycatch in industrial fisheries in the region. Climate change, by raising temperatures in the sand, is also taking a toll. At higher temperatures, eggs develop only into male leatherbacks.

“Despite the decline in nesting numbers, Bird’s Head remains the largest leatherback nesting aggregation in the Pacific, if only because the other populations are severely depleted or extinct,” the researchers write.

Conservationists have begun programs on moving leatherback nests to sheltered and shaded areas in order to ensure a better success rate for hatching individuals. Lead author, Ricardo Tapilatu, a PhD student with UAB and an Indonesian native, says that he expects these programs to “increase hatching success to 80 percent or more.”

Scientists estimate that out of a thousand leatherback hatchlings only one survives. As hatchlings, leatherbacks must pass a gauntlet of hungry birds, insects, fish, and invasive species in order to reach feeding grounds.

“The leatherback is one of the most intriguing animals in nature, and we are watching it head towards extinction in front of our eyes,” Wibbels says.

Older than the dinosaurs—and having survived numerous extinction events—leatherbacks are also one of the world’s greatest travelers. Leatherbacks laying in the western Pacific have been tracked traveling from Indonesian New Guinea to feeding grounds off the U.S. West Coast, some 11,265 kilometers (7,000 miles). Leatherbacks are also capable of diving an incredible 1,200 meters (4,200 feet) after their primary food source: jellyfish. Many leatherbacks have been know to mistake plastic bags for jellyfish, consuming bags which can lead to injury and even death.