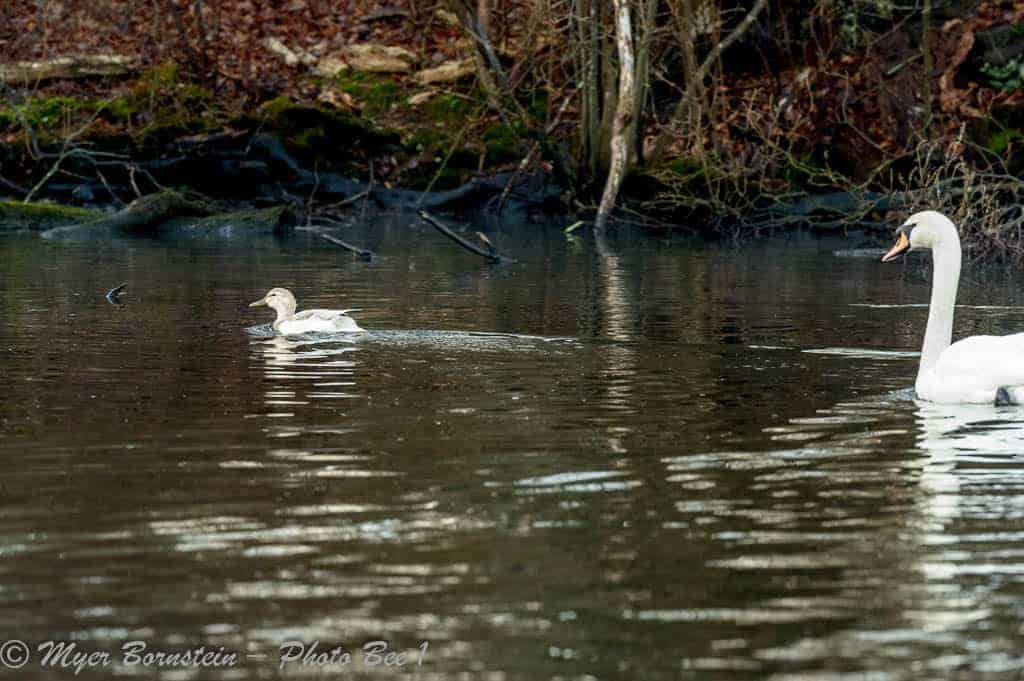 At one of the locations that I photograph at, there mute swans and mallards present along with other species of ducks and geese. I discovered what appears to be a partially leucistic mallard on the pond. What what became interesting, is that the mute swans started chasing this mallard, although they do not chase any of the other normal appearing mallards. And the swans did not stop chasing after the mallard until the mallard swam into the reeds where the swans could not locate the mallard, so they went about their business eating.

Discussion of Leucistism from  Wikipedia: ”

Leucism (occasionally spelled leukism) is a general term for the phenotype resulting from defects in pigment cell differentiation and/or migration from the neural crest to skin, hair, or feathers during development. This results in either the entire surface (if all pigment cells fail to develop) or patches of body surface (if only a subset are defective) having a lack of cells capable of making pigment.

Since all pigment cell-types differentiate from the same multipotent precursor cell-type, leucism can cause the reduction in all types of pigment. This is in contrast to albinism, for which leucism is often mistaken. Albinism results in the reduction of melanin production only, though the melanocyte (or melanophore) is still present. Thus in species that have other pigment cell-types, for example xanthophores, albinos are not entirely white, but instead display a pale yellow colour.

More common than a complete absence of pigment cells is localized or incomplete hypopigmentation, resulting in irregular patches of white on an animal that otherwise has normal colouring and patterning.

A further difference between albinism and leucism is in eye colour. Due to the lack of melanin production in both the retinal pigmented epithelium (RPE) and iris, albinos typically have red eyes due to the underlying blood vessels showing through. In contrast, most leucistic animals have normally coloured eyes. This is because the melanocytes of the RPE are not derived from the neural crest, instead an outpouching of the neural tube generates the optic cup which, in turn, forms the retina. As these cells are from an independent developmental origin, they are typically unaffected by the genetic cause of leucism.