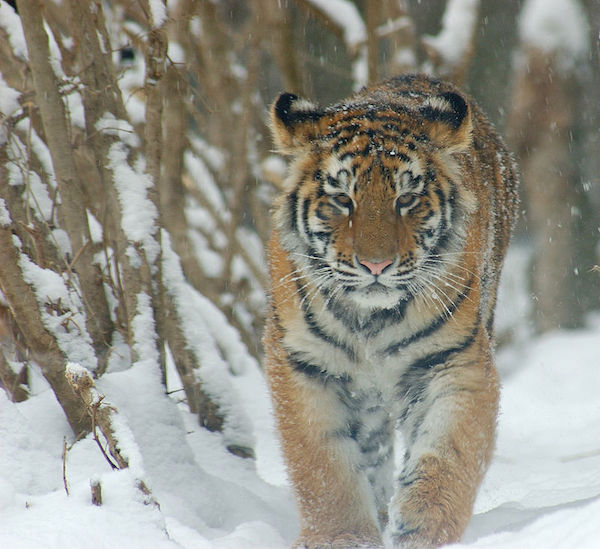 This is the first part of series examining the impact of forest loss on Siberian tigers. Part II discusses in more detail what their shrinking habitat and low numbers may mean for their future.

The destruction of Russian forests to supply timber to international markets is becoming one of the biggest threats to the world’s largest cat, the Siberian tiger. Russia has more forests than any other country, representing about one-fifth of the world’s total forest cover and contains more than half of the world’s coniferous forests. However, worldwide demand for high quality timber, along with weak regulations, has led to widespread logging of Russia’s trees.

The forests of the Russian Far East are of the “mixed boreal” type, where East Asian coniferous–deciduous forests and the boreal forests merge. Originally, the forests were a mixture of Korean pine and deciduous species like birch and aspen; in the north and at high elevations, conifers like spruce, fir and larch were found. The mixed boreal forests form one of the most biologically diverse habitats at high latitudes, supporting a unique mix of southern-evolved fauna like the Siberian tiger, Amur leopard (Panthera pardus orientalis) and the Asian black bear (Ursus thibetanus), along with species typical of the northern taiga, like the caribou (Rangifer tarandus) and Ussuri brown bear (Ursus arctos lasiotus).

Human activities such as selective logging of economically valuable Korean pine and disturbances like fire have resulted in the conversion of many of the mixed boreal forests into secondary forests of oak and birch. This habitat poorer quality compared than the original mixed boreal composition, and does not support as many herbivores like deer and wild boar; this, in turn, affects apex carnivores like the tiger.

Life history of the Amur tiger

The Siberian or Amur tiger (Panthera tigris altaica) occupies the northernmost areas of all tiger species, with the Korean pine forests of the Russian Far East comprising its favorite habitat. Fewer than 400 adult and subadult Siberian tigers remain, 95 percent of which were reported in the Sikhote-Alin Mountains that run from north to south east of Vladivostok. A population of about 20 tigers has been reported in Southwest Primorsky, close to Russia’s border with China.

“A full range survey is planned for this coming winter, but no full range survey has been conducted since 2005,” Dale Miquelle, Director of the Wildlife Conservation Society Russia Program, told mongabay.com. “Most people think numbers have dropped since that time. The 2005 survey had about 120 adult males, 180 adult females, 30 subadults and about 100 cubs.”

The Wildlife Conservation Society has been monitoring over 60 radio-collared tigers in the area since 1992, and uncovered a wealth of information about their natural history. For instance, they found that tigresses need a home range of 250 to 450 square kilometers (97 to 174 square miles), and dispersing young tigers may wander over 200 kilometers (125 miles) in search of their own territories. They feed mainly on red deer, wild boar and sika deer. Tigresses produce an average of 2.4 cubs every 21 months, but researchers found about half of them died before adulthood, often as a result of the poaching of their mothers.

The home range of the Siberian tiger is much larger than that of its close relative, the Bengal tiger. Researchers believe this is because there is less prey available in the Siberian tiger’s higher latitude habitat.

“Prey biomass estimates in high-quality habitats in India range from 2,000 to nearly 7,500 kilogram per square kilometer, whereas in the Russian Far East, quality habitat supports a prey biomass of less than 600 kilogram per square kilometer,” writes Dale Miquelle, Director of the Wildlife Conservation Society Russia Program in his book about Siberian tigers. Female Amur tigers need to maintain home ranges more than 20 times larger than Bengal tigers in order to provide enough food for themselves and their young. This means tiger densities in the Russian Far East rarely exceed one animal per 100 square kilometers (39 square miles), whereas “some parts of India can boast of more than 16 tigers per 100 square kilometers,” writes Miquelle.

Hunting of prey by humans is one of the main threats to the tiger population. “Prey are legally hunted (outside protected areas) and are intensively poached as well,” Miquelle told mongabay.com. In addition, logging of Russia’s boreal forests — much of it illegal — is taking a toll on Siberian tiger habitat.

According to the forest-monitoring site, Global Forest Watch, Russia lost more than 36.5 million hectares of forest between 2001 and 2013, representing about four percent of the country’s forested area. Estimates by NGOs operating in Russia and Japan found illegal logging was responsible for between 10 and 80 percent of timber harvests, depending on the district.

The U.S. and most countries in the E.U. have banned the import of timber whose legal harvest cannot be verified. However, according to a recent report from the independent NGO Environmental Investigation Agency (EIA), Japan has not taken steps to reduce import of illegal timber. In addition to importing timber directly from Russia, Japan also imports finished wood products through China, many of which were originally sourced from Russian forests.

In a recent report in the journal Eurasian Geography and Economics, Joshua Newell and John Simeone discuss how deforestation in Russia is now driven by a complex set of factors. By tracking forest production and trade data from 1946 to 2012, they were able to demonstrate how Russia is opening up its markets to the world, and that such globalization has increased deforestation. Russian timber trade has become dependent on exports, making wood from Russia a “global resource.” The study also tracked the flow of Russian wood through China to U.S. urban centers.

“Demand in export markets, combined with the spatial fracturing of the industry across the forest landscape and impoverished (and often corrupt) forest management, has led to forest degradation patterns in Russia quite different from that in the Soviet period,” writes Sewell.

Intact forest landscapes (IFLs), which are swaths of undisturbed old-growth forest, are critical tiger habitat. Global Forest Watch shows that a significant amount of IFLs still remain in the Russian Far East, many outside protected areas, which are threatened by logging. There has even been a tree cover gain of 279,535 hectares in the region. However, Newell and Simeone warn that there is also a concurrent decline in the “quality” of Russian forests, which involves factors such as tree biodiversity and biomass. Although forest cover in Russia seems to have increased when one simply looks at tree cover, the paper claims this expansion was due to growth on denuded and former agricultural lands.

Overall, Russia lost more than 36.5 million hectares of forest between 2001 and 2013. While old growth intact forest landscapes (IFLs) still exist in the country, they often do not coincide with protected areas. Siberian tigers range along a small portion of the far east of Russia, indicated by a yellow oval. Map courtesy of Global Forest Watch. Click to enlarge.

“The forest succession underway in Russia is the unabated transformation of mature coniferous forests (spruces, pines, firs, and larch) into younger, less commercially valuable deciduous forests (aspen, birch, etc.),” the authors write. “This loss of forest quality is the result of a confluence of anthropogenic disturbances (e.g., forestry, mining, road construction, oil and gas development, and clearing for agriculture) and natural ones (e.g., pest outbreaks and fire).”

So where does this leave the Siberian tiger?

“The majority of Amur tigers live outside protected areas, with the protected areas acting as a type of source site where densities of prey are higher, and reproduction of tigers is greater,” said Miquelle in an interview.

According to Miquelle, protecting extant Korean pine forests is a first step, which will help prey species bounce back. Reintroducing prey species and corridors to connect tiger population will also help. In addition, important habitat areas need to be identified, protected, and included in conservation policy.

“A successful tiger conservation strategy in north-east Asia will depend upon creating and effectively managing a core network of protected areas, which are connected to and interspersed with multiple-use lands where tiger conservation is integrated with sustainable use of natural resources by humans.”

If this is to be believed, and why not, then another example of denudation of habitat to satisfy the needs of a burgeoning human population. Until we as a race address this problem on a global scale then such scenarios will continue unabated and the planet's wildlife heritage will shrink and shrink and shrink…………………………

There is so much against these magnificent cats. The importance of their habitat and the ever growing loss of it, the constant threat of poaching. 400 in number is worrying let us hope those in a position to help will move quickly to keep these beautiful animals from extinction.