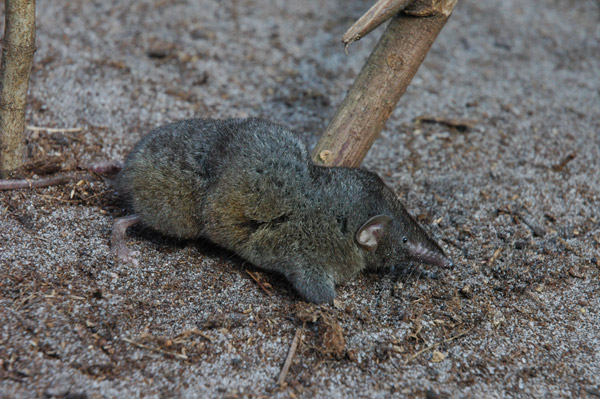 In 1917, Joel Asaph Allen examined an innocuous species of shrew from the Congo Basin and made a remarkable discovery: the shrew’s spine was unlike any seen before. Interlocking lumbar vertebrae made the species’ spine four times strong than any other vertebrate on Earth adjusted for its size. The small mammal had been discovered only seven years before and was dubbed the hero shrew (Scutisorex somereni), after the name give to it by the local Mangbetu people, who had long known of the shrew’s remarkable abilities.

“This shrew first came to light when explorers came to the eastern part of the Democratic Republic of Congo. The explorers watched in amazement as a full-grown man stood on the back of the hero shrew, and the animal walked away, unharmed,” explains Bill Stanley, Director of Collections at Chicago’s Field Museum.

Now, nearly a century after Allen discovered the hero shrew’s spiny secret (and the reason for its name), Stanley and a team of scientists have made a remarkable discovery: a new species of hero shrew, the second only worldwide. Notably, this new species, dubbed C), appears to be an intermediate evolutionary member between regular shrews and the extreme original hero shrew. Instead of a remarkable ten or eleven lumbar vertebrae like the hero shrew, Thor’s hero shrew has eight (humans only have five).

The new species was named after Thorvald “Thor” Holmes, Jr. from the Humboldt State University Vertebrate Museum, however the researchers were also aware of the fact that Thor was a suitable name for a super-strong species. The new shrew was also discovered in the Congo Basin, more specifically in the forests near the Tshuapa River in the Democratic Republic of Congo. There is no information on whether-or-not the species is endangered, but it appears to be only found in a small area.

The paper describing the new species in Biology Letters, also hypothesizes why hero shrews have evolved such distinct and incredibly-strong spines. The scientists believe that these shrews use their spines to lever logs and rocks in order to reach prey hiding underneath such as earthworms. Similarly, the shrews may employ their spine to bring to light beetle larva hiding between dead leaves and the trunks of palm trees in swamp forests. Although neither behavior has been observed by scientists, locals say the shrews are common in palm forests.

“Access to this high quality, predictable energy source may have provided an evolutionary advantage, allowing the evolution of the reinforced torso,” the scientists write.

Shrews make up their own family Soricidae and are most-closely related to moles. Unlike rodents, shrews’ teeth do not regrow. Over 300 shrew species have been described to date.

Stanley says that the new remarkable species proves that “the Age of Discovery is not over.” Scientists describe around 18,000 new species every year, however mammal discoveries remain relatively rare with on average less than fifty made annually, most of these rodents and bats.