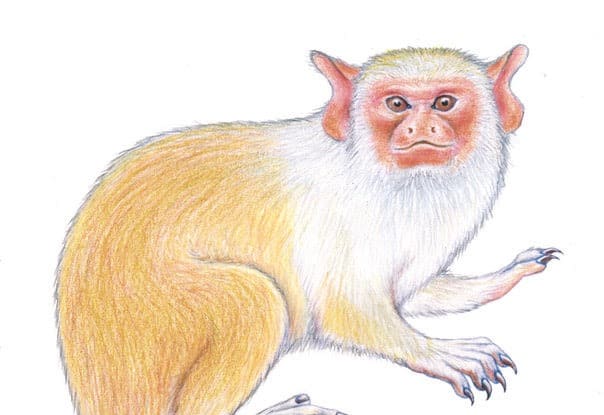 From an area of southern Amazonia, where forests are rapidly being cut for gold mining, agriculture, cattle pastures, and construction of dams, researchers have described a species of marmoset that’s new to science.

“The spread of deforestation is pretty visible,” said Rodrigo Costa Araújo of the National Institute of Amazonian Research, Brazil.

Araújo and his colleagues had been surveying the stretch of Amazon forest lying between the Tapajós and Jamanxim rivers in the Brazilian state of Pará for primates when they first spotted the marmosets, they report in a recent study published in PeerJ.

“The first time I recorded the new species was a very exciting moment!” Araújo, lead author of the study, said in an email. “I saw a small group of three marmosets in the border of the forest, before entering the trail so I was surprised with such a lucky encounter. Immediately I took my binoculars and my heart started to beat hard when I saw their white tails.”

So the tail was an indication that the marmoset could be a new species. To confirm this, Araújo and his colleagues trekked through the forests and canoed up streams, recording details of every individual marmoset or troop they observed. They also collected five specimens of the monkey as well as samples of their muscle tissue in the field under appropriate permits. They later analyzed the specimens to confirm that the marmoset species was indeed new to science.

The marmoset, with its distinct white tail, beige-yellowish lower half, white forearms with a beige-yellowish spot on the elbow, and white feet and hands, has been named Mico munduruku after the Munduruku, an indigenous group of people who live in the Tapajós-Jamanxim interfluve.

The discovery of M. munduruku wasn’t entirely unexpected. Only a handful of primate and mammal surveys have been conducted in the region between the Tapajós and Jamanxim rivers, the researchers say, and no marmosets have ever been collected from there. The forests in the area are also largely isolated from the range of other similar species by the rivers, Araújo said.

“These facts triggered the expeditions to the Tapajos-Jamanxim interfluve and, although finding new species is quite unpredictable, I had a strong sense that a distinct species could be found,” he said.

Moreover, people living in the region, including those who spend time in the forests mining gold, had told the researchers about the species. “They are aware of the marmosets and were able to give accurate descriptions of the species — locally these marmosets are called as soins,” Araújo said.

At the moment, given the scarcity of information on M. munduruku, the researchers recommend listing the marmoset as data deficient on the IUCN Red List.

However, the Amazon forest that’s home to M. munduruku is under tremendous pressure. The forests are being rapidly cut for agricultural expansion and logging, and four hydroelectric power plants have been approved for construction there, Araújo said. Gold mining is also rampant.

“The region is a hotspot for gold miners, so there is dredging and digging of the river bed and its tributaries,” Araújo said in a statement. “It is a little-studied region and the biodiversity there is poorly known. Having a new primate species described here clearly demonstrates that the habitat of still unknown species are being destroyed.”

It’s a race against time, but the researchers plan to continue to survey southern Amazonia and collect more data on all the marmosets that occur in the region, so that effective conservation actions can be designed.

This article by Shreya Dasgupta was first published on Mongabay.com on 5 September 2019.