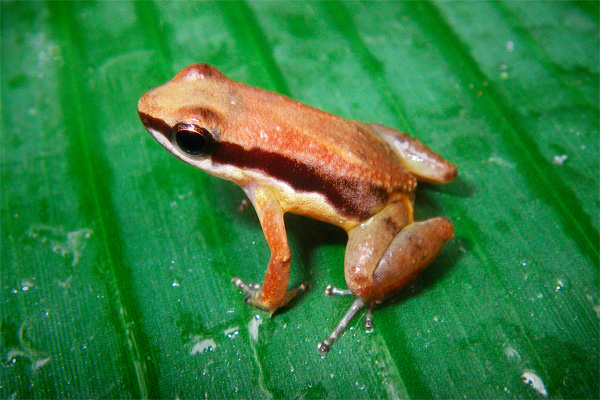 Scientists have described a new species of poison dart frog after discovering it during a study to determine the impact of tourism on biodiversity in a tract of rainforest known as “The Lost World” in Guyana. The scientists named the frog Allobates amissibilis — in Latin, “that may be lost” — in recognition of its home, which was the set for British author Sir Arthur Conan Doyle’s 1912 book, The Lost World. The frog was discovered near Turu Falls, a waterfall at the foot of the Iwokrama Mountains in Central Guyana.

According to the Senckenberg Nature Research Society, the intent of the study was to investigate populations of another frog, the Hoogmoeds harlequin frog (Atelopus hoogmoedi), to determine whether it might be impacted by planned ecotourism development in the region. While the researchers were conducting their survey, they came across the thumbnail-sized frog, which they couldn’t identify. Subsequent analysis showed it to be an undescribed species.

Allobates amissibilis is now the third Allobates species know from Guyana. Like other poison dart frogs, it derives its toxicity from the ants, mites, and other invertebrates on which it feeds. The species is thought to be a “micro-endemic” — found in only a small area of habitat.