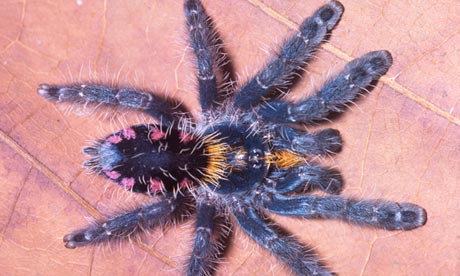 There is a story, perhaps apocryphal, that Harvard professor and mycologist Roland Thaxter once gave a public lecture on the Laboulbeniales, an enigmatic group of fungi that grow on the integument of insects. A woman in the audience is said to have asked: “Professor Thaxter, this is all interesting, but of what value is it to mankind?” to which Thaxter replied: “None, thank God!”

Much species exploration is undertaken out of pure curiosity about the living world, so it is easy to understand why progress in some obscure taxa has been slow. Other groups, however, are so significant that neglect of their taxonomy is inexplicable. Theraphosidae is one such taxon.

The theraphosids include about one-third of the 2,693 documented species of mygalomorphs – tarantulas and funnel web spiders. In the intricatesub-webs of invertebrate animals in many terrestrial ecosystems these are “top” predators, making them of special interest to ecology. They have been used as model organisms in such diverse studies as molecular biology, biochemistry, pharmacology, ethology and biogeography, and they have a large and devoted following in the international pet trade. Yet their taxonomy, natural history andphylogeny remain incompletelystudied.

Professor Rogério Bertani, of the Instituto Butantan, São Paulo, recently revised three theraphosid genera, improving our knowledge of their species diversity, phylogeny, and geographic and natural histories, and describing nine species as new. Although there were more interesting natural history stories attached to someof his other new species, I couldnot get past the sheer beauty of one, Typhochlaena costae. Itsspectacular colouration, long goldensetae (hairs) over the chelicerae (jaws), carapace and abdomen are chelicerae-dropping gorgeous.

These same setae differentiate Tcostae from all other species of its genus. In addition, in both males and females, the dorsum of the abdomen is black with two rows of four red spots. The species is known from the Brazilianstates of Tocantins, Maranhão and Piauí. Almost nothing is known of its natural history.

What Tcostae lacks in details of its biology, it makes up for in its contribution to the evolutionary history of its genus. At the base of the Typhochlaena family tree is a tritomy, an unresolved three-way split, one branch of which is Tcostae by itself. Interestingly, for all three genera in the study, species are highly endemic and there are no documented overlaps of the ranges of species belonging to the same genus. Where species of the other two genera, Iridopelma and Pachistopelma, occur together geographically there appears to be a distinct ecological separation, with species of the latter strictly associated with bromeliads and those of the former, with one possible exception, associated with trees, under loose bark or on the trunk or leaves of palm trees.

All of this points out the need for more taxonomic and natural historystudies of the largest of our world’s spiders, disentangling a web of intrigue woven over their long andrichevolutionary history. Bertani’sstudy, ZooKeys 230: 1-94 (2012), is available online at zookeys.org.

This article was written by Quentin Wheeler, director of the International Institute for Species Exploration, Arizona State University – first published by the Observer UK.