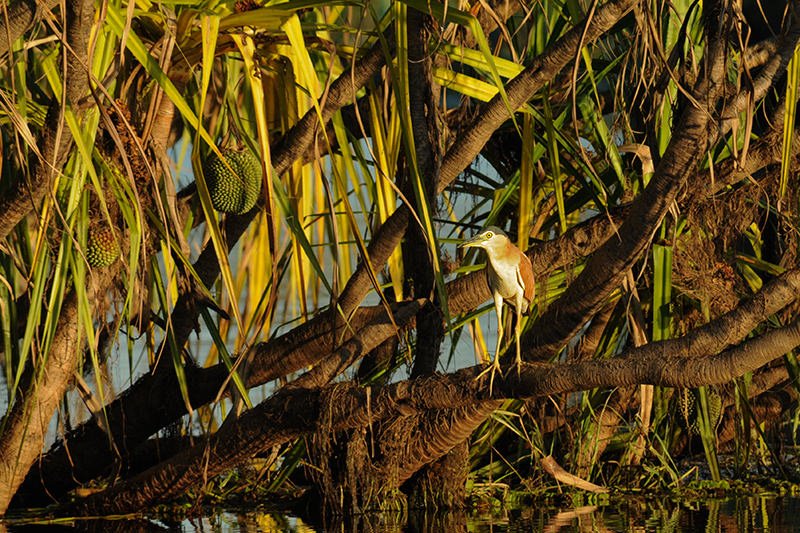 Kakadu National Park is Australia’s true wildlife mecca. The most impressive feature of the park is the seasonal wetlands that change dramatically between the rainy and the dry seasons. April is the first month of the dry season, meaning that the flooding started to subside, though many areas accessible during the dry season are still under water. We based ourselves at Cooinda Camping ground and spent 3 days exploring the Yellow Water billabong. Best way to see the wildlife on the billabong is from a boat, and there are early morning and late afternoon cruises available at Cooinda.

The Yellow Water billagong provides perfect habitat for two species of crocodiles (Saltwater and Freshwater), a phenomenal variety of bird species and a number of smaller reptiles.

I have already written about Kakadu’s crocodiles earlier in my blog and here I would like to concentrate on the water birds. Kakadu supports 280 species of birds – about one third of all Australia’s birds. I had a number of species on my list that I was hoping to see in Kakadu, and all of them were wetland – associated species.

Comb crested jacanas were very abundant at the Yellow Water. This species is also know as the Jesus bird, because of their apparent ability to walk on water – a superpower they owe to their hugely elongated toes that allow them to balance effortlessly on top of water lilies and other aquatic plants.

In this species it is the male that looks after the chicks once they hatch. Most of them take their paternal duties quite seriously, religiously chasing away any intruders.

Another species I was searching for was the Jabiru stork. It was too early in the season for them, but after 3 days and 6 cruises we found the first Jabiru of the season.

I was also hoping to see Brolgas at Kakadu, but while we saw a few birds flying overhead, we never got a chance to actually watch or photograph them.

The raptors are represented in Kakadu by the White-bellied sea eagle, Whistling kite and Black kite.