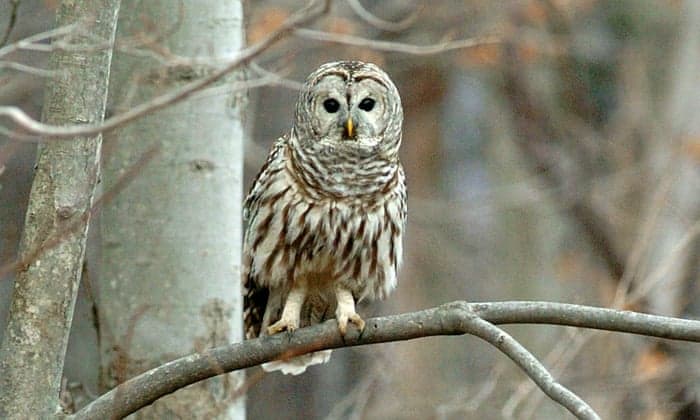 Oregon officials are warning early morning joggers and park visitors in the state capital, Salem, to watch out for an owl that steals hats after at least four people were attacked in a month.

No one was seriously hurt in any of the incidents but Brad Hilliard, 36, is one of the joggers who have lost headwear in a brush with the bird.

“It was kind of amazing how it just swooped down and grabbed my hat like that,” Hilliard said.

“It just pulled it right off my head like it was nothing!”

Keith Keever, the city’s parks superintendent, said officials had never heard of a case like it before.

Members of the Audubon Society, a bird conservancy group, had identified the culprit as a barred owl and they believed only one bird was involved, Keever said, adding that it could be more aggressive because of nesting season.

Originally from the east coast and first seen in Oregon, Washington and California in the 1970s, barred owls have been blamed for pushing out the endangered northern spotted owl.

The bird in question has targeted runners near Bush’s Pasture Park, where signs now warn people to avoid jogging before dawn or, jokingly, to consider putting on a hard hat.

Hilliard said he has been back a couple of times this week to look for his cap. “It hasn’t turned up yet,” he said. “I just assume it’s being used in a nest!”

This article was first published by The Guardian on 06 Feb 2015.