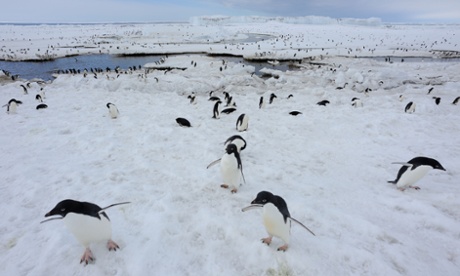 Penguins are in peril because of extreme environmental conditions linked to climate change, research has shown. Two new studies highlight the plight of penguin colonies trying to cope with the effects of global warming in Argentina and Antarctica. At both locations, the beguiling birds face an uncertain future.

Climate change is killing chicks from the world’s biggest colony of Magellanic penguins at Punta Tombo, Argentina, by increasing the rate of drenching rainstorms and heatwaves, say scientists.

Protected only by a downy coat, the Magellanic chicks can be left to struggle and die when rainstorms hit their colony. At other times, faced with extreme heat, their lack of waterproofing means they cannot cool off by taking a dip.

Dr Ginger Rebstock, from the University of Washington, US, who took part in a 27 year-long study of the 400,000-strong Argentinian colony, said: “We’re going to see years where almost no chicks survive if climate change makes storms bigger and more frequent during vulnerable times of the breeding season, as climatologists predict.”

During the course of the study, an average 65% of chicks died each year, with some 40% starving. Climate change was blamed for an average 7% of chick deaths, but in some years was the most common cause of death. In one year, 43% of all chick deaths were attributed to climate change and in another 50%.

Starvation and the weather were likely to interact increasingly as the climate changed, according to the researchers. “Starving chicks are more likely to die in a storm,” said Professor Dee Boersma, also from the University of Washington, who led the study.

At Ross Island, scientists spent 13 years collecting data on the foraging ability of chick-rearing Adelie penguins, which are dependent on year-round sea ice. They found that under “normal” conditions they were able to cope with changes in sea ice concentrations.

But the appearance of giant icebergs reduced their chances of catching fish prey. How well they would be able to survive if such conditions became more common was unknown.

“If the frequency of such extreme events increases, then it will become very hard to predict how penguin populations will buffer future sea ice changes,” said lead researcher Dr Amelie Lescroel, from the Centre d’Ecologie Fontionnelle et Evolutive in France.

Both studies appear in the latest edition of the online journal Public Library of Science ONE.