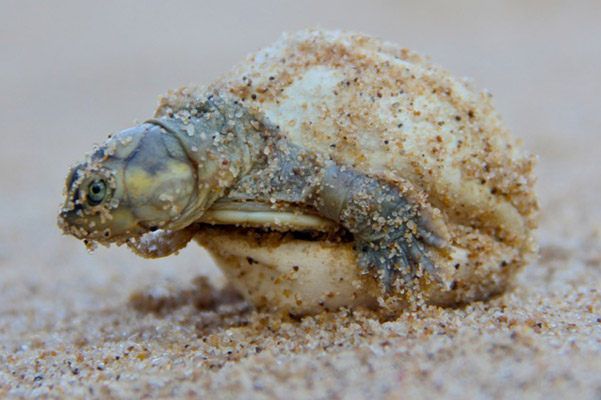 Biologists recently documented one of nature’s least-known, big events. On the banks of the Purus River in the Brazilian Amazon, researchers witnessed the mass-hatching of an estimated 210,000 giant South American river turtles (Podocnemis expansa). The giant South American river turtle, or Arrau, is the world’s largest side-necked turtle and can grow up to 80 centimeters long (nearly three feet).

Researchers with the Wildlife Conservation Society (WCS) and the Chico Mendes Institute for Biodiversity Conservation marked and released 15,000 (around 7 percent) of the newly-born hatchlings in the Abufari Biological Reserve. Future surveys of the species will allow researchers to collect data on the individually-marked turtles in an effort to better protect them in the future.

Only a small percentage of the hundreds of thousands of hatchlings are expected to survive to adult. Mass-hatching is a strategy used by some other turtle species, most famously sea turtles, in order to overwhelm predators and allowing a small number to squeak into adulthood.

“Turtles are among the most endangered species of vertebrates in the region and worldwide,” notes Julie Kunen, Executive Director of WCS’s Latin America and the Caribbean Program. “Monitoring programs for these and other turtles and tortoises will provide a foundation for sound management plans in the years to come.”

Although listed as Least Concern by the IUCN Red List, the giant South America side-necked turtle is imperiled by overconsumption of its meat and eggs by local people. It has not been formally evaluated by the IUCN since 1996.