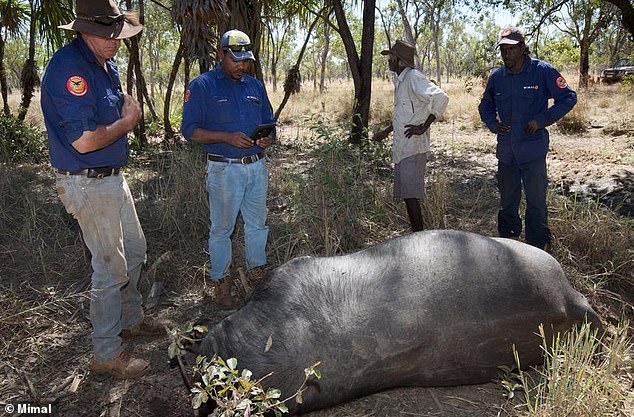 Poachers have illegally shot and beheaded buffaloes in a remote Australian outback region and left their carcasses to rot on sacred Aboriginal land.

One decapitated buffalo was found in Mount Catt, central Arnhem Land in the Northern Territory – where it is illegal to travel on Aboriginal land without permission from traditional landowners.

Those who gain unauthorised entry to a sacred site face maximum penalties of up to a year in prison.

‘This shameless disregard for Aboriginal and non-Aboriginal law has got to stop and stop right now,’ Mr Bush-Blanasi said.

‘They drove onto sacred sites, shot and beheaded valuable trophy buffalo and left their carcasses to rot.’

Mimal Land Management – which represents landowners in the area – said four poachers in the region recently encroached on sacred sites in the area without permission from the land’s custodian.

After taking trophy heads, the poachers left the bodies to rot in the bush.

‘These guys blatantly ignored that fella [the landowner] and they’ve driven straight past him and out onto his country where they have proceeded to then blast away a lot of our animals in that area,’ Mimal feral animal management coordinator Will Green said.

The organisation said the report from the Mount Catt outstation about 650km east of Darwin was the latest case of ‘brazen hunting and theft of stock and entry of sacred sites’.

The NLC said it was working with the territory’s police force to make stiffer penalties for illegal poachers.

‘If you are on Aboriginal land without a valid permit or a section 19 lease or licence issued by the NLC you should leave, and leave now,’ NLC chief executive Marion Scrymgour said.

This article was first published by The Mail Online on 5 November 2020. Lead Image: Land rangers discovered poachers had illegally shot and beheaded buffaloes in a sacred Aboriginal site in Arnhem Land in the Northern Territory’s remote north-east.