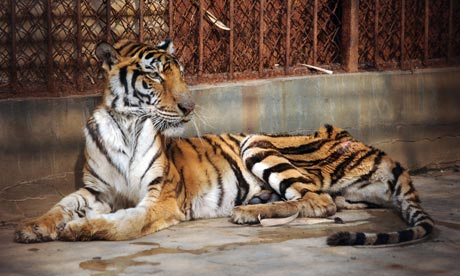 Huddled in filthy cages and starved to the extent their fur is hanging off their jutting bones, these once majestic creatures are mercilessly being killed to decorate the homes of the elite, while their bones are ground down to make “tonic” wines.

As few as 3,500 tigers survive in the wild, yet more than 5,000 captive-bred tigers are held in sickening Chinese ‘farms’ and ‘zoos’.

Investigations by the London-based Environmental Investigation Agency (EIA) have uncovered a legalised domestic trade in the sale of tiger body parts, with skins alone being worth up to £25,000.

Although a 1993 State Council order in China banned the use of tiger bone for medicinal purposes, new evidence suggests a ‘secret’ Government notification on the use of the bones of captive-bred tigers is being used to justify the manufacture of ‘tonic’ wines, which can sell for as much as £130 a bottle.

Tiger bones are soaked in wine, but are not listed as an ingredient in the ‘tonic’, the reports states. The report accuses China of defying the will of the international community and calls upon more senior levels of the Government to take control and amend laws to facilitate the destruction of stockpiles of all tiger parts and the phasing out of tiger farms.

EIA also wants the Government to send a clear message to all breeders, consumers and the industry that official policy is to end all demand and trade. Debbie Banks, Head of EIA’s Tiger Campaign, said: “The stark contradiction between China’s international posture supporting efforts to save the wild tiger and its inward-facing domestic policies which stimulate demand and ultimately drive the poaching of wild tigers represents one of the biggest cons ever perpetrated in the history of tiger conservation.

“Pro-tiger trade policies are championed by only a handful of officials in a couple of Government departments and it behooves China to vigorously address and terminate this intolerable disconnect between words and deeds which so undermines international efforts to save the tiger.”

Pressure for greater protection ofrare species including tigers grew ahead the opening of the Convention on the International Trade in Endangered Species in Bangkok.

A David Shepherd Wildlife Foundation spokesman said: “EIA is working with us on the Tiger Time campaign to raise awareness and stop the illegal trade in tigers from all sources whether wild or farmed.

We invite you to vote FOR or AGAINST the the closure of China’s Tiger Farms. Please vote and also leave your comments at the bottom of this page.

Close all tiger farms in China

The editorial content of this article was written by Charlotte Meredith for the Express.