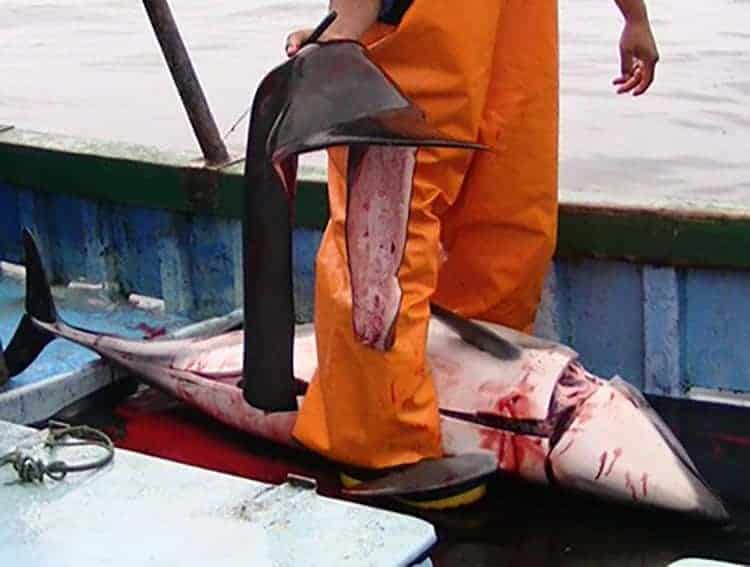 Peruvian fishermen slaughtered dolphins to use as bait for shark fishing, an undercover investigation has revealed. Footage showed infant and adult dolphins being harpooned then stabbed and clubbed before, in some cases, being cut open and butchered while still alive. The slaughtered dolphins were cut up and used as bait. Dolphins are also killed for human consumption in Peru even though it is illegal.

Up to 15,000 dolphins are being killed in this way every year by Peruvian long-line shark-fishing fleets, according to three organisations – Peruvian NGO Mundo Azul, US NGO Blue Voice and the UK-based Ecostorm agency – involved in the month-long investigation.

The footage was filmed secretly on two shark-fishing boats and numerous interviews with fishermen corroborate that dolphin killing is common practice.

“We videotaped from the boat and in the water and what we saw was unimaginably horrific,” said Stefan Austermuhle, executive director of Mundo Azul, who spent 24 days on one shark-fishing boat off the Peruvian coast.

“I just went numb looking at the pitiful dolphin being battered with a club. All I could do was continue recording the event, as well as the butchering of the sharks in the hope that making the world aware of this tragedy can somehow bring an end to it.

“The Peruvian fishermen endanger the survival of the dolphin species while pushing sharks towards a population collapse.”

Sharks too are killed – by cutting off their noses while still alive and pushing wires through their brains and down the spinal cord in order to immobilize them, the investigation showed.

Pregnant sharks caught alive are not returned to sea in order to guarantee the species’ survival but are slaughtered on board with their living babies dying between the carcasses.

The killing of dolphins has been illegal in Peru since 1997.

We invite you to vote FOR or AGAINST the continuation of the slaughter of dolphins by fishermen in Peru. Please vote and leave your comments at the bottom of this page.

The editorial content of this article was written and published by Dan Collyns for the Guardian.