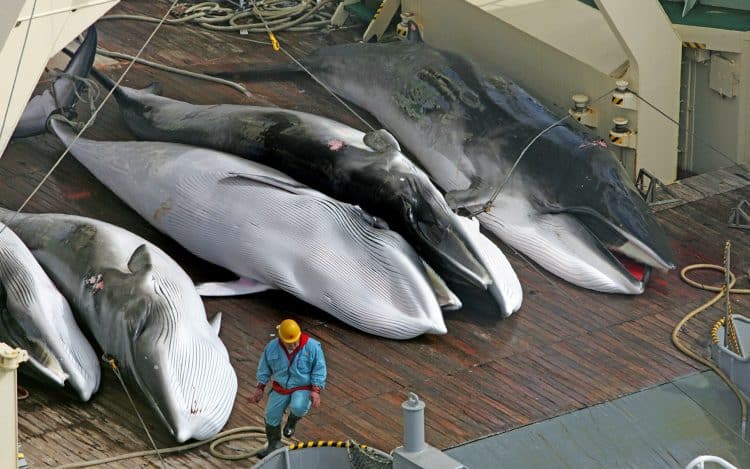 Japan’s whaling fleet arrived back at the port of Shimonoseki on the weekend with a barbaric tally of 333 dead whales that are no longer swimming freely in the Southern Ocean.

If the work of the Japanese whalers is anything like last year, more than 100 pregnant females and 50 or so juveniles will have been killed. But from now on, things are different.

Japan’s announcement on Boxing Day last year that it would be leaving the International Whaling Commission (IWC) means those whalers will likely never return to the Southern Ocean. Now they will only hunt whales in their own waters.

For the first time in more than 100 years, the Southern Ocean’s whales are free from the impending threat of a nation intent on hunting them.

Norway set up an Antarctic whaling station in 1904 and Japanese whalers have been heading south every summer since before the second world war, joining dozens of factory ships from Britain and the United States. The only temporary reprieve whales have had was because of the second world war.

So we shouldn’t underestimate what a historic decision this was, both for Japan and for the whales of the Southern Ocean around Antarctica.

But we can’t allow ourselves or the Australian government to think that the war on whales has been won.

If we go to the polls in May, within a month or so of the next Australian government taking office, Japan will head back out to kill whales in its own waters.

What impact this will have on these migratory species isn’t clear but the cruelty of killing and stripping the seas of our ocean giants is beyond dispute.

Just because it’s happening in a different hemisphere doesn’t mean it’s not our problem, and Australia’s position as a global leader on whale conservation now faces a stern, new test.

The next Australian government needs to be clear that whoever is killing whales will be called to account. Japan may have left the IWC but it can’t escape its international responsibility to conserve whale populations.

As Australia’s IWC commissioner, Nick Gales, told Japan at the most recent IWC meeting in Brazil, globally the country had “lost its social licence” to kill whales.

Japan won’t regain it by leaving the world body that was set up to ensure the conservation and management of our whales.

Japan says it will hunt whales in line with IWC methods for calculating catch limits “to avoid negative impact on cetacean resources”. But the reality is that Japan’s interest in whale conservation is insincere. In the 15 years I have been attending IWC meetings, Japan has blocked and opposed countless conservation measures.

Whales face many threats in our oceans and Australia has played a leading role in driving the IWC’s conservation agenda. When Australian ministers arrive at these meetings, they are treated like rock stars. It is a deserved accolade for years of the hard yards leading the fight against whaling. Australia took Japan and the fakery of its “scientific whaling” program to the UN’s international court of justice in 2014 – and won.

At the most recent IWC meeting, Australia was again on the front foot blocking Japan’s attempts to rewrite the IWC’s voting rules and end the 33-year-long ban on commercial whaling.

But now Australia must make sure the IWC becomes an organisation that finds a way to protect whales from all the other threats they face.

These include a rise in global shipping which puts more whales at risk of being struck and makes the oceans noisier; an estimated 300,000 cetaceans die accidentally every year after being caught in commercial fishing gear; and a boom in offshore oil and gas exploration that exposes whales to the disorientating sonic booms of seismic explorations.

Now is the time to push these efforts to greater levels, because the urgency is ever greater.

But it’s not just the whales that now need saving. Japan’s withdrawal threatens to harpoon the IWC’s future. As the country paying the largest membership dues, it creates a significant $230,000 hole in the IWC’s financial accounts – that’s 8% of the fees it get from governments. We can’t allow that hole to be used as an excuse to cut back on conservation efforts.

As a custodian of the most biodiverse oceans on the planet and globally renown marine areas such as the Great Barrier Reef, Ningaloo Reef and the Great Australian Bight, Australia has forged a reputation as a global leader in marine conservation.

But that crown has begun to slip. The country’s tourism jewel, the Great Barrier Reef, struggles to cope with global warming while its government’s climate policy lies in tatters. That government has stripped about 35 million hectares of “no take” zones from its network of marine parks. Fishing has seen shark numbers in Queensland plummet by three-quarters, while authorities have resisted global efforts to protect these marine species.

So how will the next government rise to the challenge of Japan’s return to commercial whaling? Australians expect the government to step up once again. But we must also put our own house in order.

We invite you to share your opinion whether Japan should be sanctioned for continuing to slaughter whales? Please vote and leave your comments at the bottom of this page.

The whales are not part of the Japanese effort to cultivate life. You just can’t go anywhere and take life. It doesn’t belong to you. It’s a crime! If we all did things that in the past our culture did, we would all be living in grass huts. I’m tired of the argument.

This has been total B.S. for years because the Japanese claim it is done for scientific studies. Not true. Most of the whale meat shows up in school lunches and market places. Whale meat is not as popular as it once was. The whale moratorium needs to be instituted in Japan and a few other countries that are still slaughtering these magnificent animals.

THEY NEED TO BE STOPPED!!

Sue Curtis I agree, but we have been saying the,same thing for years & nothing changes. Recently they we’re given permission to hunt endangered species, why?? $$$? People must take action, I would join the cause but unaware of just who is protesting.

Yes…this is the 21st century and there are less than zero excuses for this cruel and antiquated practice.

Stubbornly hanging onto old ways because one can…kills

Yes…this is the 21st century and there are less than zero excuses for this cruel and antiquated practice.

Stubbornly hanging onto old ways because one can…kills

It beggars belief that anyone would vote no. Whales are part of our eco-system. They are mammals with feelings and close family groups. We do not need whale meat/bones or any other part of a whale. To slaughter a pregnant creature – any pregnant creature – is nothing short of barbaric. They do not kill for scientific research – that’s just a poor excuse to obtain whale meat to charge exorbitant prices in Japanese restaurants. YES – we should boycott Japan!!