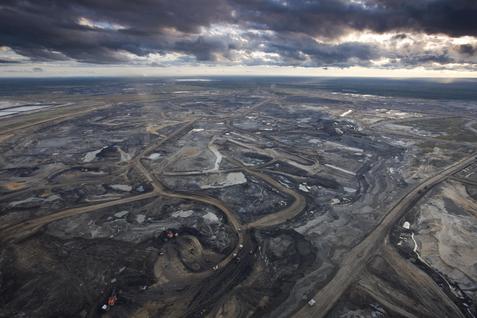 The continuing wildlife crisis in Canada’s boreal forest just got worst as the Alberta government, after 8 years of delays, released a wetlands policy that gives 195 destructive tar sands mining and drilling projects a pass on having to comply with wetlands protections.

This policy further subjects wildlife to potentially major harms and this wetland rich area to risk of massive habitat loss without even nominal measures to mitigate these enormous impacts. One-fifth of the entire Province of Alberta is wetlands and the boreal forest is up to 60 percent wetlands. Tar sands has immense impacts to birds and wildlife. Strip mining of the 1,200 square miles currently allocated for mines will destroy habitat for an estimated 480,000 to 3.6 million adult birds. Drilling infrastructure could eliminate or fragment another 19,000 square miles of migratory bird habitat. Tar sands operations will also reduce bird births, with one estimate ranging from 9.6 million to 72 million fewer birds being born over a forty-year period.

Alberta’s wetlands’ policy reflects a growing trend in Canada to put industry needs over the needs of wildlife and nature. The alarming exemptions aside, the policy drops a commitment to no net loss of wetlands, and allows even the most sensitive wetlands to be destroyed. The policy does not protect wetlands that are ephemeral in nature, despite the fact that these wetlands are some of the most valuable wildlife habitat, providing stopover and breeding areas.

In general, the policy allows non-environmental factors such as “economic priorities” to be weighed in decisions to allow wetlands to be destroyed. Alberta’s willingness to balance such priorities against wildlife shockingly played out in a decision to allow the massive Jackpine Mine tar sands expansion project to be approved despite a finding that “the project would likely have significant adverse environmental effects on wetlands, traditional plant potential areas, wetland-reliant species at risk, migratory birds that are wetland-reliant or species at risk, and biodiversity.”

In the end, “economic” factors were allowed to override environmental concerns. Such industry giveaways based on “balancing” are not permitted under the U.S. Clean Water Act, which requires projects to meet stringent environmentally based standards regardless of other factors. Sadly, Canada and Alberta continue to pave the way for massive tar sands devastation and put our shared wildlife in harms’ way. The result will be fewer ducks, song birds, and other wildlife for Americans and Canadians to enjoy.

As Canada has shown with its continued failure to adhere sound climate policies in order to allow tar sands extraction and now with its unwillingness to require tar sands companies to meet even basic standards in wetland protection, Canada’s government does not take environmental stewardship seriously and is beholden to the tar sands industry.

It’s past time to put a halt to Canada’s dirty not-so-secret. Wildlife and tar sands don’t mix. Canada is responsible for its own policies, but we can say no thanks to tar sands and send a strong signal that we won’t tolerate practices that put wildlife at risk.

The editorial content of this article was written by Jim Murphy for National Wildlife Federation.

We invite you to vote FOR or AGAINST the rejection of the Keystone XL tar sands pipeline? Please vote and also leave your comments at the bottom of this page.

Please remember this is the 21st century President Obama and voters will be heard.

We the People and our planet over corporate profit!

should a drunk oil tanker driver drive for exxon

Is Hewitt oil one of the ones involved in the Canadian tar sands mess?

Should really be rejected EVERYwhere…take a good look at the pic of the devastation and just think "that could be MY home-land if the Big Oil and gas companies have their way" Worse dessication than from widespread nuclear strikes. NO clean water, NOTHING capable of growing anywhere.

Of course it should be rejected in the U.S. Absolutely rejected!!!!

Hi,
POLL: Should President Obama reject the keystone XL tar sands pipeline? Yes, and in addition, not wanting to rock the boat, you should think about banning fracking.