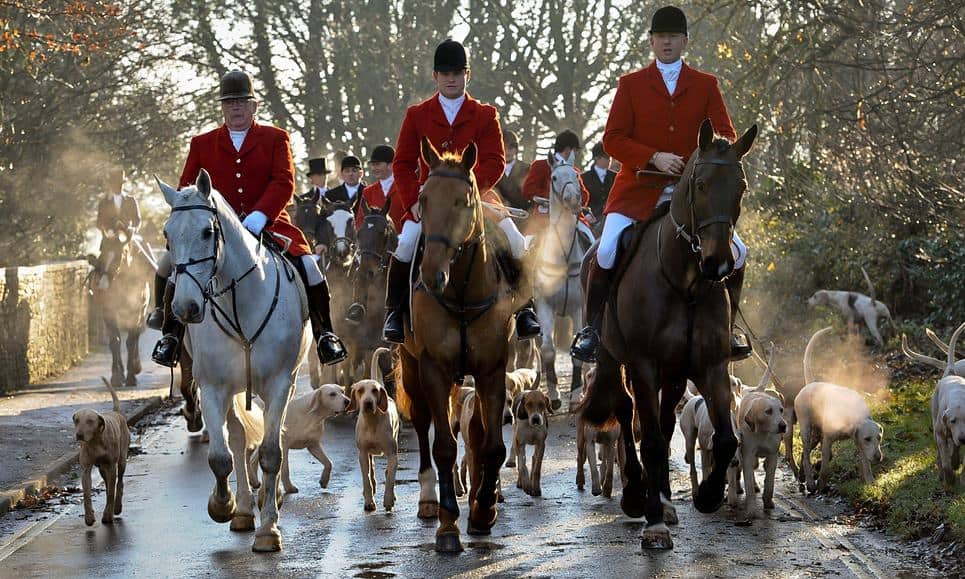 More than 300 hunts gathering for Boxing Day met on Saturday amid growing parliamentary opposition from Conservative MPs to repealing the ban on hunting foxes with packs of hounds.

The traditional outings, expected to attract around 250,000 riders and supporters, are usually portrayed by the Countryside Alliance as a symbol of mass protest against the Hunting Act which came into force in 2005.

An attempt in July by the government to permit more than two dogs – the current limit – to be deployed to flush foxes out of cover in England and Wales failed when the SNP threatened to vote against the change.

Sir Roger Gale, MP for North Thanet, president of Conservative Animal Welfare and patron of Blue Fox, said: “The hunting of wild animals with dogs has been consigned to the dustbin of history, along with cockfighting and bear-baiting, and the idea that this clock ought to be turned back is regressive and unpleasant.”

Lorraine Platt, Blue Fox’s founder, said: “There is a growing intolerance of killing wildlife for sport, whether it be a noble lion in Africa or a humble hare here in England.” Blue Fox’s patrons include the minister for sport, Tracey Crouch, and justice ministers Dominic Raab and Caroline Dinenage.

The League Against Cruel Sports welcomed the surge in support among Conservative MPs as proof that repeal efforts are doomed. New figures from Ipsos Mori demonstrate that public opposition to hunting is increasing. According to Lacs’s annual poll, 83% of respondents objected to making foxhunting with packs of hounds legal again. Opposition to legalising foxhunting has risen from 72% in 2008 to 83% this year.

Tom Quinn, director of campaigns for Lacs, said: “Opposition to legalising foxhunting is higher than it has ever been. We believe this reflects that as a nation the vast majority of us are repulsed at the thought of killing animals for sport. Over eight out of 10 rural residents are opposed to legalisation of foxhunting; a dramatic increase in just the last three years. This destroys the hunts’ argument that it’s just ‘urbanites’ or ‘animal rights’ people who oppose hunting because they don’t understand it.”

The number of prosecutions of hunts has recently fallen away, reflecting partially the difficulties animal rights groups experience in bringing prosecutions. No new charges were brought against organised hunts last year, according to the Countryside Alliance. Since the act came into force, there have been only 24 successful prosecutions of hunt members.

In its Boxing Day message, the alliance said as many as 83% of hunts have the same number of members, or more, since the act came into force. The Countryside Alliance’s chief executive, Tim Bonner, said: “It’s clear that the Hunting Act is in tatters. It was never about foxes or animal welfare but rather an attempt to eradicate hunts and the communities that surround them. Support for hunts is as strong as ever and the Hunting Act is mostly being used to prosecute poaching offences. The last case to be brought under the Hunting Act collapsed earlier this month. Those opposed to hunting are getting more and more desperate and resorting to ever more drastic measures to try to secure a conviction.”

This article was first published by The Guardian on 26 Dec 2015.

We invite you to share your opinion whether the ban on fox hunting should be relaxed in the UK? Please vote and leave your comments at the bottom of this page: