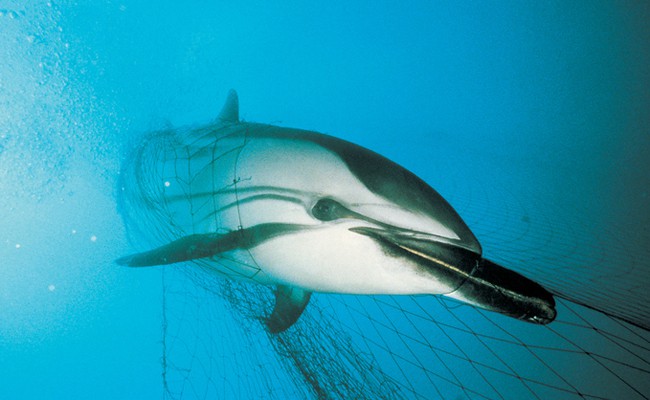 Three senators are taking action to ban driftnets following an investigation that exposed the toll they’re taking on marine life just miles off the coast of California.

Just weeks ago, Mercy For Animals, SeaLegacy, Sharkwater and the Turtle Island Restoration Network released a disturbing undercover footage exposing how many species are regularly trapped, injured and killed in driftnets that are used by California’s driftnet fishing industry targeting swordfish and thresher sharks.

These nets, which have otherwise become known as ‘walls of death’ and ‘ death nets,’ can span more than a mile long, and hang 100 feet deep. Unsurprisingly, they’re taking a serious toll on marine life that goes far beyond the species they target. Dozens of others have become victims, who are entangled, injured, killed and discarded as bycatch, from dolphins, rays, sea turtles, sharks and whales to seabirds, sea lions and other nontarget fish—including protected species.

“If a dolphin, whale, turtle, swordfish, thresher shark, or mako shark swims into that net, they’re going to die. It’s out of sight, out of mind. Ocean wildlife and endangered species are continually harmed or killed by this dangerous fishery and it’s time to end the slaughter,” Paul Nicklen, co-founder and expedition lead for SeaLegacy, said at the time.

Sadly, the coalition behind the investigation estimates that for every swordfish caught in a driftnet, seven other animals are drowned and killed.

While these nets have been banned in other parts of the world, on the east coast of the U.S., and off the coasts of Washington and Oregon, they remain deadly and indiscriminate killers off the coast of California.

Now members of Congress are taking action to end their use there. Senators Dianne Feinstein, Shelley Moore Capito and Kamala Harrishave since introduced the Driftnet Modernization and Bycatch Reduction Act (S.2773), which would phase out the use of these nets by 2020, in addition to authorizing National Oceanic and Atmospheric Administration (NOAA) to develop a program that would help fisheries transition to other methods.

“The use of driftnets to target swordfish harms too many endangered or protected marine animals and should be phased out,”said Senator Feinstein.“It’s unacceptable that a single California fishery that uses this type of driftnet is killing more dolphins and porpoises than the rest of the West Coast combined. Our bipartisan bill will remove harmful large mesh driftnets from our oceans and encourage more sustainable fishing methods.”

Hopefully this legislation will be passed to protect marine life from driftnets, and the attention the investigation has drawn to cruelty and waste within this industry will inspire more people to leave seafood off of their plates. The species being targeted by this industry are no less deserving of our consideration, or protection.

You can help by signing and sharing the petition urging members of Congress to end the cruel and wasteful use of driftnets in U.S. waters by passing the Driftnet Modernization and Bycatch Reduction Act.

We invite you to share your opinion whether the cruel and wasteful use of driftnets should be banned? Please vote and leave your comments at the bottom of this page.

ANYTHING CRUEL SHOULD BE BANNED !