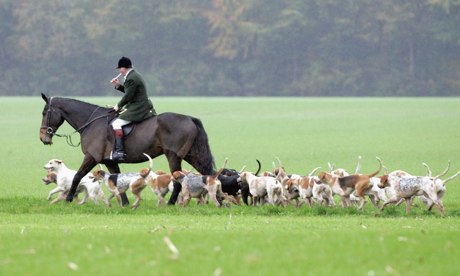 A senior Liberal Democrat has called on the coalition to reconsider the fox-hunting law as it is being flouted with impunity and encourages young people in the countryside to think it is normal to break the law.

Sir Nick Harvey, a former defence minister, described the fox-hunting law as “an ass” since it is routinely ignored in large parts of the country and there is no capability to police it.

As the fox-hunting season kicks off on Boxing Day with up to 260 events across the country, the North Devon MP said the law “cannot remain where it is” for much longer as it is unenforceable.

“We have passed a law which is an ass,” he said. “It is a law that cannot be implemented. It could only be implemented with a ridiculous distortion of policing priorities. It worries me that in very rural communities where the long arm of the law has difficulty in reaching at the best of times, young people see a well-known and quite controversial piece of law which can be and is broken with impunity. You wonder what message this sends to them about drink-driving and other law.”

Harvey said he was not fighting a crusade to repeal the hunting ban, but wants the issue to be revisited.

He suggested the law could be amended to make it similar to Scotland, where mounted huntsmen can chase a fox in the interests of pest control provided their dogs are muzzled and the fox is either shot dead or killed by a bird of prey.

He also described a sharp divide between rural and urban Britain, saying he worries that country life one day could become unviable unless something is done to bridge the divide and address the inequality in funding for schools, hospital, social services and emergency services.

Countryside campaigners have long argued the traditions of hunting are an essential part of rural tradition that are misunderstood by people who live in towns. However, surveys show the public overwhelmingly backs a ban on the controversial bloodsport.

A poll by Ipsos Mori, carried out for the Royal Society for the Prevention of Cruelty to Animals and the International Fund for Animal Welfare, found 80% of the public believed fox hunting should remain illegal – up 4% on last year. It found little difference in views between rural and urban communities.

In October, David Cameron said he had sympathy with the idea of relaxing laws on fox-hunting, and hunt supporters were last year buoyed by a renewed commitment from within the government to hold a free vote on repealing the eight-year-old ban on hunting with dogs. However, this is now looking unlikely before 2015.

Some 260 fox hunts are expected to take place across Britain today on Boxing Day – 40 fewer than last year. Despite the drop in predicted numbers, Charlotte Cooper, spokesman for the Countryside Alliance, said support for hunting was “as strong, if not stronger, than it has ever been”, with the organisation expecting up to 250,000 hunt supporters to follow the packs or turn out for meets. At least 100 riders and more than a thousand supporters are likely to take part in the Bicester Hunt with Whaddon Chase, while another 100 riders and 2,000 supporters will participate in the Surrey Union Hunt.

Ian Gilchrist, joint-master of the Surrey Union hunt, said traditions were disappearing and the support showed “people want to maintain it as much as they can”.

However, Lee Moon, spokesman for the Hunt Saboteurs Association, said 40 groups were planning to non-violently sabotage hunts on Boxing Day with hunting horns, voice calls to control the hounds and video monitoring.

“There are 300 hunts in the UK and they all hunt at least twice a week, some of them four days a week, between 1 November – the official start of the season – and March. Boxing Day is just when they have the press out and they’re on their best behaviour.

“We use the same tactics to stop them as they use to hunt animals.”

Joe Duckworth, chief executive of the League Against Cruel Sports, said he was not opposed to people enjoying the countryside on horses, but objected to “people killing and torturing our wildlife in the process”.

“The ethics and spirit of Britain now is that we don’t want to see animals treated cruelly in the name of sport,” he said. “It’s not about class – we will prosecute anybody for breaking the law. It doesn’t matter if they live in a council house or a castle.”

Duckworth praised the Isle of Wight Farmers’ Bloodhounds, who “hunt” a human runner rather than foxes.

Almost 50 people were found guilty under the Hunting Act last year, according to Ministry of Justice figures.

We invite you to vote FOR or AGAINST a relaxation of the fox-hunting laws in the UK. Even if you’re not from the UK , please vote and also leave your comments at the bottom of this page.

The editorial content of this article was written by Rowena Mason and Natalie Gil for the Guardian.