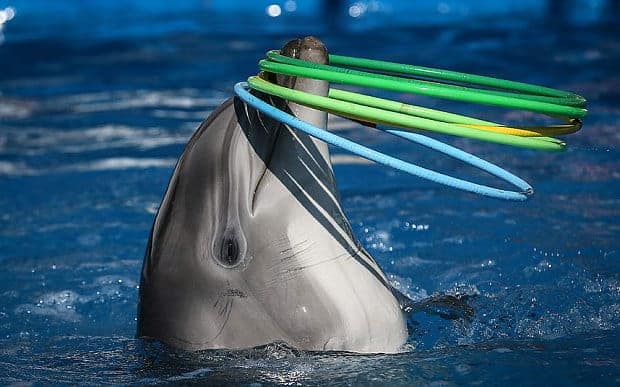 Mexico City has just banned keeping dolphins in captivity, and advocates are hoping the rest of the country will soon follow in putting an end to dolphin confinement and exploitation.

The Mexico City Congress, which recognized that dolphins are sentient beings who suffer in captivity, just passed a law that bans the use of dolphins for public display, therapy, scientific research, training and entertainment, including swim with programs, and has established a new system of fines for anyone caught breaking the new laws.

The only facility in Mexico City currently keeping dolphins is Six Flags Mexico, which is owned by Dolphin Discovery. The President of the Environment Commission, Xavier López Adame, stressed that the facility is ranked among the worst offenders on In Defense of Animals’ (IDA) Top Ten list of the Worst Tanks for Dolphins and Whales in North America.

Six Flags, which became well-known for holding Keiko, the orca used in “Free Willy,” was included on the list for its troubling treatment of bottlenose dolphins. Aside from keeping them in barren tanks in the middle of an amusement park where they are forced to perform unnatural acts to amuse visitors, the staff also spread misinformation about how they enjoy their lives in captivity.

The park was also included for offering swim-programs, where dolphins are trained to perform behaviors that make it seem like they love guests. IDA added, “As in other Dolphin Discovery parks, dolphins are coerced to give rides where people grab and hang onto their dorsal and pectoral fins and to give “kisses,” “hugs” and “handshakes.”

Soon, however, this heartbreaking exploitation of dolphins will all be coming to an end, and the news is being celebrated by animal advocates and a number of whale and dolphin advocacy organizations.

Although it’s not yet clear what will happen to the dolphins currently in Mexico City, Six Flags now has three months to come into compliance with the new laws, and supporters hope that the ban will help set a precedent for other areas to follow. According to WDC, there are still more than 30 facilities in Mexico that are holding approximately 300 dolphins captive.

“The best way to bring about change for the common good is by example. Kudos to our friends and colleagues in Mexico, as well as deputy López Adame and the coordinators of parties in the local Mexico City Congress for enacting this positive step for dolphins. We encourage the rest of the country to follow in Mexico City’s footsteps and ban all captive dolphin displays,” said Ric O’Barry, Founder and Director of the Dolphin Project.

We invite you to share your opinion whether the keeping of dolphins in captivity should be banned? Please vote and leave your comments at the bottom of this page.