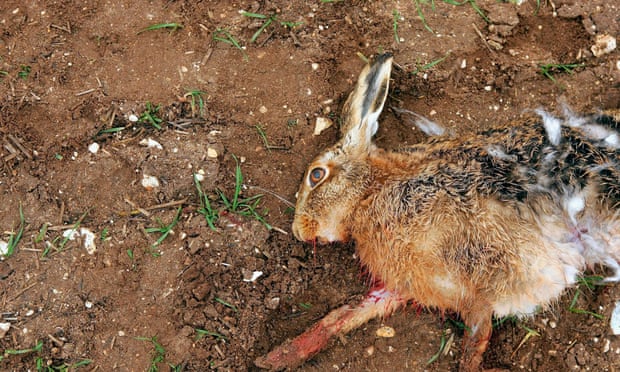 There is a crime wave cascading through Britain that the government doesn’t appear much to care about. In Lincolnshire alone, police have arrested or reported for summons 152 people for hare coursing since September 2015, compared with just 65 for the entire “season” last year. Across the country, the Badger Trust logged 441 incidents of badger baiting last year, up on 2014, with hundreds of additional incidents reported to the police.

The illegal slaughter of birds of prey is rife, deer poaching is an increasing problem in many rural areas, and rare bats continue to be illegally cleared from roosts by developers and homeowners. The common denominator in these crimes is, of course, that wildlife is at the sharp end of human greed or cruelty. It is particularly pronounced online, with a booming illegal trade in endangered plants and animals – everything from rhino horn and ivory to seahorses and live turtles.

More than 400 items banned under the Convention on International Trade in Endangered Species (Cites) were last year seized in Britain: a typical example is the Sheffield jeweller Catherine Emberton, who pleaded guilty to selling online 129 pieces of jewellery made from tiger teeth and claws.

A key role in detecting these crimes is played by the National Wildlife Crime Unit (NWCU). This small, globally admired team of specialist police officers based in the humble surroundings of the old Livingstone police station in Scotland will cease to exist in April unless the government unveils a last-minute funding package.

The unit gathers and analyses intelligence on wildlife crime, informs local police forces of incidents they should investigate, trains ordinary officers to investigate these complex crimes and helps bring about successful prosecutions. It costs a bargain £427,000 a year to run, mostly funded by the Home Office and Defra, and is perpetually endangered itself.

In 2014, the government announced it would give it only two years of money, allowing it to limp on in a way that hardly inspires police officers to join it or develop their expertise in detecting wildlife crime. Now the unit fears it will fold with the government still not revealing whether there’s any funding for it beyond March.

I know sometimes a long list of celebrities appealing to save something can make us want to do the opposite, but in the campaign to save the NWCU most of those who have spoken out – from Jane Goodall to Chris Packham, Steve Backshall and Charlotte Uhlenbroek – do know what they are talking about.

Wildlife crime is simply crime, and should be treated as such. It is also complicated, easily overlooked and difficult to prosecute, which is why it can’t be left to overstretched and poorly resourced wildlife crime officers within local constabularies.

There are 35,000 rare plants and animals protected by Cites legislation, which gives a clue as to why we might need a few national specialists to tackle these crimes – the NWCU is currently assisting with 24 investigations into endangered animals illegally traded via the internet in Britain.

Rather than having to repeatedly bid for another year or two of funding, the NWCU needs to be placed on a secure financial footing by the government so it can continue its long-term investigations with staff who are secure enough to stick around and develop their expertise.

Its loss would deskill police forces across the country and make it harder than ever to detect wildlife crime. It would be awful PR for the government, adding to the impression given by its backdoor attempt to lift the ban on foxhunting, its extension of a poorly monitored badger cull that invites illegal persecution, and its casual attitude towards the disappearance of raptors from moorland estates, that this is an administration recklessly indifferent to the fate of rare animals and plants.

But most importantly, it would tend a terrible signal to all the weird people who bait badgers, steal peregrine chicks, torture hares or taxidermy tiger cubs. Wildlife criminals would realise there was less risk than ever of being caught and held accountable for their crimes.

This article was first published by The Guardian on 08 Jan 2016.

We invite you to share your opinion whether the National Wildlife Crime Unit should be properly funded by the British Government? Please vote and leave your comments at the bottom of this page: