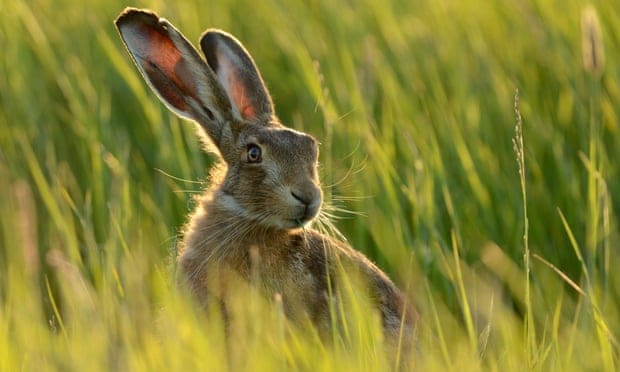 The nation’s deep affection for the hare, once a common sight in fields, is recorded in prose, pub names and poetry.

Writers including Shakespeare, Lewis Carroll and Ted Hughes have paid tribute to the UK’s fastest land mammal, while any English county will boast at least one pub with the word hare in its name.

But now a failure to revive numbers after a century of decline from an estimated four million to under 800,000 has triggered moves to protect hares during their breeding season.

Former agriculture minister George Eustice is introducing a private member’s bill that would make it illegal to shoot hares from February to September.

“England and Wales are among the few remaining European countries that do not have a modern close season on shooting hares during their breeding season, which is a terrible oversight,” Eustice said.

The Born Free Foundation claims that more than 300,000 hares are shot for sport each year. Most of the shoots take place in February, when the pheasant season ends, and the female hares are already pregnant or nursing their young.

Born Free said that this results in the death of leverets through starvation or predation, and the loss of breeding females.

“Seeing a spring hare sitting bolt upright or zigzagging at speed across a field is a real treat. Sadly it is one that is becoming increasingly rare on our islands,” said Dr Mark Jones, head of policy at Born Free.

“Concerted action is urgently needed to protect these magical and mystical animals, not least from those who would shoot them for sport during their critical breeding season.”

Both brown and mountain hares are listed as “priority species” under the UK biodiversity action plan, but government attempts to increase their numbers have been unsuccessful.

“A former government action plan to double hare numbers by 2010 failed disastrously and now hares face a new threat from disease,” said Paul Tillsley, head of conservation and education at the League Against Cruel Sports.

“Scotland introduced a close season for killing brown hares and mountain hares in 2011, so it is long overdue that England and Wales follow suit.”

A 2011 early day motion calling for a close season attracted 146 MPs’ signatures. “Mr Eustice does have influence as a recent agriculture minister, and we would hope that, even if his bill doesn’t succeed directly, it will put the issue on the government’s agenda, with the possibility of the government tabling its own bill,” Jones said.

Calls to save the hare follow the row over farmers’ rights to kill pigeons and crows. This was made illegal last month following a legal challenge from animal rights groups, only to be revoked following protests by countryside campaigners.

Currently, hares are protected under an arcane act more than a century old. Eustice said: “Even the Victorians recognised the importance of protecting hares during their breeding season, but the 1892 Hares Preservation Act was delivered through a ban on sale and its provisions are no longer effective, nor enforced.”

Lead Image Source: Brown hare numbers in the UK are believed to have fallen from four million in 1880 to around 800,000 now. Photograph: Alamy

This article was first published by The Guardian on 5 May 2019.

We invite you to share your opinion whether the shooting of hares in breeding season should be banned? Please vote and leave your comments at the bottom of this page.