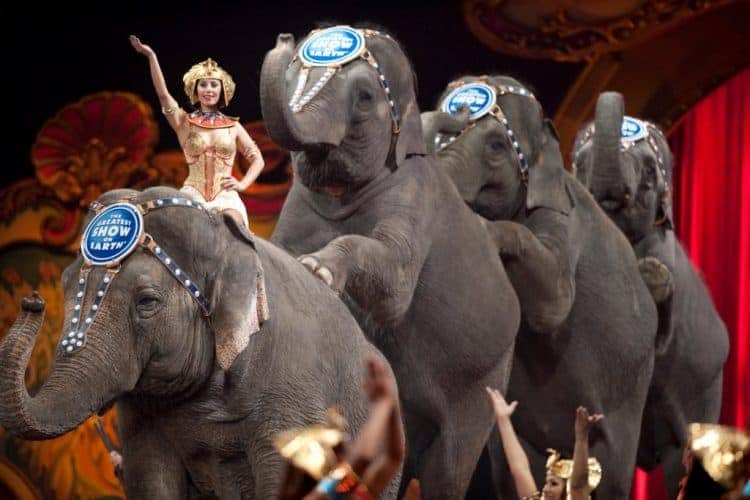 Animal advocates are celebrating progress in an effort to ban wild and exotic animals in New York City circuses, but the measure still needs support.

The New York City Council is currently considering a bill introduced by council members Rosie Mendez and Corey Johnson that would ban dozens of species of “wild or exotic animals for public entertainment or amusement,” ranging from elephants and big cats to bears and non-human primates.

Lawmakers point out in the bill that there are many reasons why using wild animals as performers puts their welfare at risk. Circus animals are subjected to frequent travel and extended periods of confinement, and they’re denied the ability to socialize or engage in other natural behaviors. Often, these animals also endure coercive and physically abusive training techniques.

Research, numerous undercover investigations and news reports have highlighted some of the violent abuses that performing animals face behind the scenes, including food restrictions, beating and other blatant mistreatment.

Ultimately, using animals this way takes a serious toll on them both physically and mentally — and that, in turn, puts public safety at risk.

If passed, the bill will likely have a major impact on UniverSoul Circus, which regularly uses wild animals, and has come under fire on multiple occasions for mistreating its performers. UniverSoul was banned from the city in 2014 after officials found that animals were being kept in inappropriate conditions, but the company was later allowed to return.

This week the City Council’s Committee on Health voted unanimously to pass the bill, which means it will soon go to the full council for a vote.

“Keeping exotic animals in captivity, transporting them around the country and requiring them to perform tricks night after night for human amusement is in our view inherently inhumane,” emphasized Councilman Corey Johnson, chair of the health committee.

Not only would this bill help protect animals and humans, it would set an amazing example for even more cities across the U.S. to follow. The legislation has received widespread support from the public and national animal advocacy organizations, but unfortunately, it faces some pushback from the circus industry, which is lobbying hard to see it fail.

You can also help by signing and sharing the petition in support of a federal ban that would end the use of wild and exotic animal performances across the U.S.

For more on international efforts to protect wild animals from cruelty and exploitation, check out Stop Circus Suffering.

We invite you to share your opinion whether the use of wild animals in circuses should be banned? Please vote and leave your comments at the bottom of this page.

this form of “entertainment” has no place in a civilised society, it is neither normal or natural

I think children should be able to view santuaries and to learn at a very young age that animals need to be in the wild and not shows. You teach the young and the world changes.

do you have any doubt about that??

There is no question; of course they should not be forced into this horrible life!

NO ANIMALS SHOULD BE IN ANY KIND OF SHOW, CIRCUS, OR ANYTHING ELSE THAT DEMANDS PERFORMANCE….I DON’T MEAN AGILITY, IF THEY ENJOY IT
NOT BEATEN TO PERFORM.

YES! This must end! Shared & tweeted

no animal should be used for entertainment ever

YES all of these should be stopped and now. they all need to be sent to sancutary.

Yes they need is to stop hitting the animals

Yes and it has been done by Barnam & Bailey Circus. It is way past time to keep these animals in cages!!

Yes!!! Anyone saying otherwise is ignorant!

Yes, animals are not for our entertainment, they should be free.

For sure, especially wild ones……….

Circus berserkus
the circus is in town, what do you see?
as i look out at you, and you look in at me
do you see me as a large, roaring captive toy,
or do you look into my eyes, just know pain, no joy.
do you giggle and point as you mill around my cage,
in my terror annoint as i seethe in rage.
do you not understand that my roar is a shout:
open up the cage door and let me out

Are we emphasizing on “wild”?

if they are not mean to them .

Yes. No animal should be in the circus.

Yes the use of all animals in circus’s should be banned – it is Barbaric. The animals suffer terribly by the trainers in order to get them to do un-natural tricks – Animals were not meant to dance around, stand on stools, jump through hoops and get tortured until they learn how to do it! The days of using animals should be over – they deserve to live their lives normally without being forced into the Circus. People will feel better about going to a Circus if there are no animal acts. – There are plenty of acts to draw… Read more »

Yes!!! If people want to perform, and travel incessantly, and jump through hoops of fire, they can.
Animals are forced to perform ridiculous, unnatural movements through deprivation and cruelty.

Yes they should they are meant to be in the wild