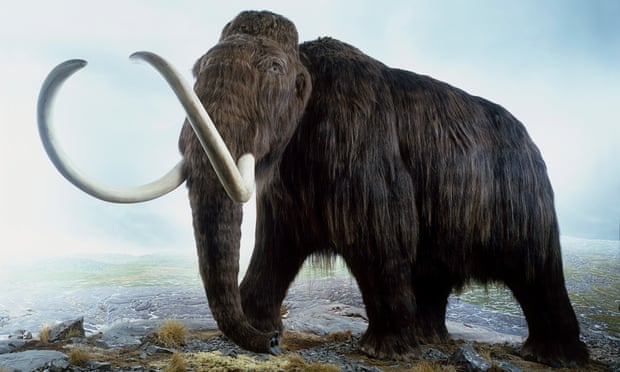 The woolly mammoth vanished from the Earth 4,000 years ago, but now scientists say they are on the brink of resurrecting the ancient beast in a revised form, through an ambitious feat of genetic engineering.

Speaking ahead of the American Association for the Advancement of Science (AAAS) annual meeting in Boston this week, the scientist leading the “de-extinction” effort said the Harvard team is just two years away from creating a hybrid embryo, in which mammoth traits would be programmed into an Asian elephant.

“Our aim is to produce a hybrid elephant-mammoth embryo,” said Prof George Church. “Actually, it would be more like an elephant with a number of mammoth traits. We’re not there yet, but it could happen in a couple of years.”

The creature, sometimes referred to as a “mammophant”, would be partly elephant, but with features such as small ears, subcutaneous fat, long shaggy hair and cold-adapted blood. The mammoth genes for these traits are spliced into the elephant DNA using the powerful gene-editing tool, Crispr.

Until now, the team have stopped at the cell stage, but are now moving towards creating embryos – although, they said that it would be many years before any serious attempt at producing a living creature.

“We’re working on ways to evaluate the impact of all these edits and basically trying to establish embryogenesis in the lab,” said Church.

Since starting the project in 2015 the researchers have increased the number of “edits” where mammoth DNA has been spliced into the elephant genome from 15 to 45.

“We already know about ones to do with small ears, subcutaneous fat, hair and blood, but there are others that seem to be positively selected,” he said.

Church said that these modifications could help preserve the Asian elephant, which is endangered, in an altered form. However, others have raised ethical concerns about the project.

Matthew Cobb, professor of zoology at the University of Manchester, said: “The proposed ‘de-extinction’ of mammoths raises a massive ethical issue – the mammoth was not simply a set of genes, it was a social animal, as is the modern Asian elephant. What will happen when the elephant-mammoth hybrid is born? How will it be greeted by elephants?”

Church also outlined plans to grow the hybrid animal within an artificial womb rather than recruit a female elephant as a surrogate mother – a plan which some believe will not be achievable within the next decade.

“We hope to do the entire procedure ex-vivo (outside a living body),” he said. “It would be unreasonable to put female reproduction at risk in an endangered species.”

He added that his lab is already capable of growing a mouse embryo in an artificial womb for 10 days – halfway through its gestation period.

“We’re testing the growth of mice ex-vivo. There are experiments in the literature from the 1980s but there hasn’t been much interest for a while,” he said. “Today we’ve got a whole new set of technology and we’re taking a fresh look at it.”

“Church’s team is proposing to rear the embryo in an ‘artificial womb’ which seems ambitious to say the least – the resultant animal would have been deprived of all the pre-birth interactions with its mother,” said Cobb.

The woolly mammoth roamed across Europe, Asia, Africa and North America during the last Ice Age and vanished about 4,000 years ago, probably due to a combination of climate change and hunting by humans.

Their closest living relative is the Asian, not the African, elephant.

“De-extincting” the mammoth has become a realistic prospect because of revolutionary gene editing techniques that allow the precise selection and insertion of DNA from specimens frozen over millennia in Siberian ice.

Church helped develop the most widely used technique, known as Crispr/Cas9, that has transformed genetic engineering since it was first demonstrated in 2012. Derived from a defence system bacteria use to fend off viruses, it allows the “cut and paste” manipulation of strands of DNA with a precision not seen before.

Gene editing and its ethical implications is one of the key topics under discussion at the Boston conference.

Church, a guest speaker at the meeting, said the mammoth project had two goals: securing an alternative future for the endangered Asian elephant and helping to combat global warming. Woolly mammoths could help prevent tundra permafrost from melting and releasing huge amounts of greenhouse gas into the atmosphere.

“They keep the tundra from thawing by punching through snow and allowing cold air to come in,” said Church. “In the summer they knock down trees and help the grass grow.”

The scientists intend to engineer elephant skin cells to produce the embryo, or multiple embryos, using cloning techniques. Nuclei from the reprogrammed cells would be placed into elephant egg cells whose own genetic material has been removed. The eggs would then be artificially stimulated to develop into embryos.

Church predicts that age-reversal will become a reality within 10 years as a result of the new developments in genetic engineering.

This article was first published by The Guardian on 16 Feb 2017.

We invite you to share your opinion whether the Woolly Mammoth should be resurrected through genetic engineering? Please vote and leave your comments at the bottom of this page.

If ‘most’ of humanity were sane, people such as Prof George Church/ Dr. Frankenstein would be immediately put in straight jacket & locked up somewhere where no creature would ever be at risk from him again.
Or better, sentence him to sorely needed forced hard labor, under guard, cleaning up manmade pollution everywhere.

Another reason I voted yes: As more and more is discovered about the Pleistocene megafauna, their effect on the landscape is better understood. As elephants in Africa are significant in creating grassland, cycling dry forest ,allowing a greater diversity of other animals to exist and migrate among the ecosystems, in some way the wooly Mammoth and older Mastodon, which browsed on the northern spruces of the taiga the cold boreal forest stretching across the northern continents. Importantly, though, mammoths seem to have crunched up the snow cover of the tundra, and as anyone who knows snow knows, the snow actually… Read more »

Extinction is the noun form of the verb extinguish. Extinctions of species found on large connected habitats such as northern Eurasia and North America very likely required several extinguishing factors, among which one was highly likely to have been modern Homo sapiens. Others include the spread of communicable disease; zoonotics, whether bacterial, viral, or prion malformation, often travel through several species. I have often thought these zoonotics have not been sufficiently explored as causal for dinosaur or Pleistocene mammal mass extinctions. Humans may have participated in the latter as direct and/or indirect vectors. Mammoths, Mastodons, Short-faced Bears, Wooly Rhinoceros, the… Read more »

IS THIS A JOKE ? WE HAVE EVOLVED LEAVE THE PAST WHERE IT BELONGS IN THE PAST. CAN YOU IMAGINE CHINA ? THEY WOULD BE IN THEIR GLORY !!

China has no “glory.” that area was one of the earliest spots where too many humans occupied through agriculture. Even today, their glory is that some of the most dangerous emergent viruses arise due to their overpopulation and their overgrowing of chickens and pigs for food. Worse than their virus cultivation, (they are far more highly resistant to cholera, which tends to easily kill other humans, etc. China is also the place where a consistent reservoir of bubonic plague has existed, and Eurasian trade probably caused the medieval plagues of both these bacteria. But the issue is really that too… Read more »

As a general rule, it’s those species that disappeared after the end of the last Ice Age that should be brought back, where possible. 4,000 years ago fits into that category so yes. Just how you would protect it from ivory poaching might well prove a problem of course.

Resurrected? To become a poachers dream with tusks like these! And the Chinese will believe that the God’s have answered their prayers for an animal with bigger tusks than an elephants!

these scientists are stupid meagalomanic morons. one should protect the living species. this would mean abusing and torturing elephants

these scientists are megalomanic morons. one should protect the living species instead of torturing elephants

I would like see a living woolly mammoth, but I’ve got mixed feelings about it, because we are still struggling to save already endangered species like the Sumatran rhino or the Kākāpō, and the energy and money used in “resurrection” projects can help more in saving what we urgently need to save. Stopping rhino horn trade or ivory for example. I’m aware that science will allow us to bring extinct animals back to life one day. But really should we?