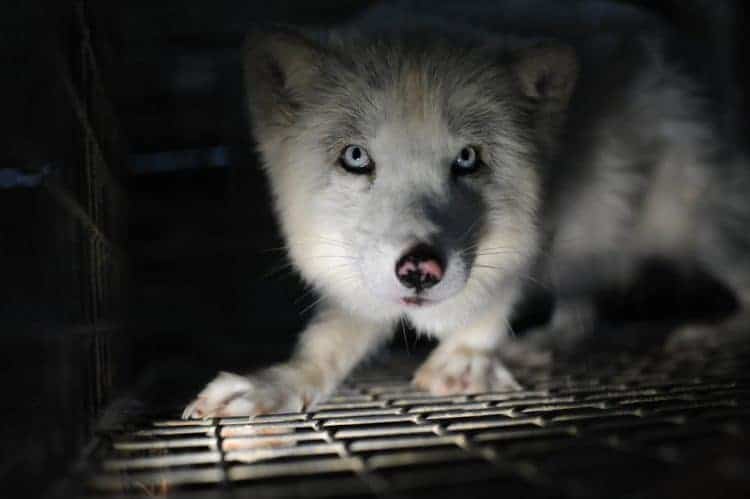 We don’t typically get to follow the lives of individual animals who are killed for their coats. Now, a short film is offering us a harrowing glimpse into the short and tragic lives of three fox siblings who were born, raised and killed on a fur farm.

The film, Fur: A Lifetime, which was just released by Animal Defenders International (ADI), was taken by hidden cameras placed on a fur farm in Poland – the fourth largest fox fur producer in the world. It spans the short lives and deaths of three arctic fox cubs, who ADI named Borys, Eryk and Aleska.

First the tiny cubs are nurtured by their mother, as best she can given the circumstances, before she is taken away from them. As they get older, their personalities come out and they attempt to play in their tiny wire cage. Soon their coats change color, and before they’re even seven months old, terrified Borys and Eryk are dragged out of their cage by a farmer, strung up by a leg and electrocuted to death.

Aleska watches as her brothers are torn away from her and killed. She is only spared because she will be used to produce more cubs, who will be torn from her to be killed for their fur as the cycle repeats.

“Over 100 million animals die for their fur every year. Our film shows the lives of these intelligent, feeling individuals and the cruelty they suffer when treated like a product. Just because they are not like us. Playfulfox cubs Borys and Eryk grow up in a small cage and die a terrifying and painful death for vanity and trinkets. This is the real cost of fur – when you buy fur, you buy cruelty, not beauty or luxury,” said ADI’s President, Jan Creamer.

The lives of these three cubs resemble nothing of their wild counterparts. They never knew the safety of a den, or the caring parents they would have had in the wild, who would have protected them and taught them the valuable skills they would need as they explored the world before setting out on their own.

Instead, they only experienced extreme confinement on the equivalent of a factory farm, and denied everything that would have enabled them to thrive. As a result, they and others like them pay a physical and psychological toll. On this single farm, ADI found foxes with bent feet and overgrown claws from living on wire floors, self-mutilation, aggression, injuries and illnesses that were left untreated, and filthy living conditions, while other investigations have found similar issues elsewhere.

According to ADI, over 15 million foxes are killed every year, usually to make trinkets, trims and accessories, but it can take up to 35 individuals to make a single coat. Sadly, foxes aren’t the only victims of this brutal industry. It’s estimated that over 110 million animals are killed on fur farms, every year, while more than 16 million are trapped in the wild, including mink, raccoon dogs, rabbits, chinchillas, coyotes, seals, otters, cats and dogs.

While the fur industry and its apologists continue to claim fur products are sustainable, eco-friendly and humane, those arguments couldn’t be further from the truth, and what few regulations and certification schemes there are do little to nothing to stop widespread suffering. While there have been major victories with nations banning fur farming, and imports, those that are still making fur are exporting products around the world.

While there are now plenty of faux options around, they still send the message that fur is trendy and open the door to other problems with mislabeling, which continues to be found to lead otherwise caring consumers to unwittingly support this industry by buying the real thing.

ADI added that the best ways to stop this cruel industry include pushing for legislation that bans fur farming, trapping and imports, urging designers and retailers to stop using and selling fur, and for us to stop buying it.

“Be comfortable in your own skin, and not that of a poor defenceless animal caged and killed to provide it. Say no to fur and yes to helping these fashion victims. Please help ADI stop this brutal trade,” said actress Joanna Lumley, who is supporting ADI’s campaign to end the fur trade, along with actor Brian Blessed.

For more on how to help, check out Animal Defenders International.