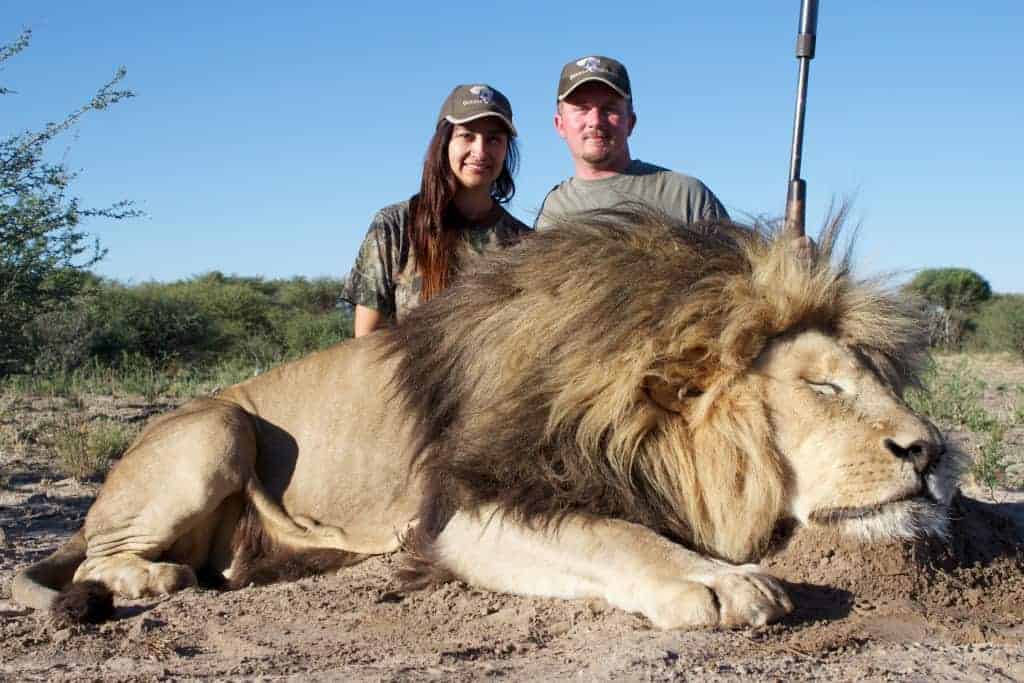 They’re known as canned hunts; captive mammal hunting ranches in the US which offer the chance to shoot a zebra or antelope or even a lion for several thousand dollars. The animals are fenced in and often unafraid of humans so the kills are easy, to the extent that some venues even provide the option of shooting them via the internet, with the use of a camera and a gun on a mount.

It’s estimated that there are more than 1,000 of them – completely legal. But many US hunters consider them a betrayal of every belief they hold dear. “I don’t consider that hunting,” said John Rogalo, a New Jersey hunter who has been stalking bears, deer and turkeys for nearly 50 years.

“It’s a weird culture that has developed in this country in the past few years. I joke that you may as well ask the farmer if you could shoot his black Angus because at least you’d get more meat for it.”

Rogalo is firmly on one side of an ever-deepening divide in the hunting community – one of the longest and proudest traditions in US culture. He considers himself part of a proud lineage of conservation-minded hunters whose totem is Theodore Roosevelt, the former president and avid outdoorsman.

Roosevelt and his contemporaries invoked a mantra of “fair chase” which they defined as an “ethical, sportsmanlike and lawful” pursuit that does not give the hunter some sort of improper advantage over the prey. He would call himself a true “hunter”.

“Hunters view it as a sport, you may take days or weeks tracking your quarry … If you didn’t get anything, that didn’t matter. It was the pursuit that counts,” says Craig Packer, a zoologist best known for his work on lions in south and east Africa.

On the other side of the divide from Rogalo are the “shooters”, as they are known. “The shooter will come over, check his Blackberry every few hours, kill something and go home. There are now more and more shooters – younger, more urban, masters of the universe. They will have bait put out, sit in a blind and shoot lions as they feed. There’s no sport in that. It’s like a selfie.”

Walter Palmer, the Minnesota dentist who gained international infamy after shooting Cecil the lion in 2015, would almost certainly qualify as a shooter rather than a hunter. Palmer paid guides $50,000 to stalk Cecil, famed for his black mane, before shooting him with a bow and arrow. Controversially, bait was used to lure the 13-year-old lion outside of a protected area in Zimbabwe.

Palmer was initially apologetic for killing a famous and well-loved lion but has since adopted the mantra that the fee he paid will help lion conservation in Africa, recently tweeting that “trophy hunting actually HELPS.” Palmer is a member of “hunter’s rights” organisation the Safari Club, which has logged more than 40 of Palmer’s kills including, among other animals, a polar bear.

Last week it was revealed that Cecil’s six-year-old son Xanda was shot and killed by another trophy hunter, also outside the boundary of a reserve in Zimbabwe. It’s unclear what will happen to Xanda’s remains – Palmer had wanted to sever and mount Cecil’s head before it was handed over to police – but these trophies are garnered with minimum effort essentially for the thrill of it, all to a backdrop of a 60% decline in African lion numbers over the past three decades.

Most US hunters remain on the ‘hunting’ side of the debate. A nationwide poll from 2013 found that 35% of American hunters aged over 18 said they hunted “for meat” with just 1% saying they wanted to procure a trophy from the animal, but tightly-held tradition and socialising are also key elements of the American hunting experience.

Sport hunting in Zimbabwe is big business, with hunters such as David Barrett paying $10,000 for the experience. Barrett, who is British, and others argue that Western hunters provide vital revenue to local communities. Photograph by Barcroft Media/ Getty

“A lot of it is about storytelling and male bonding. There is a lot of card playing,” Simon Bronner, an ethnologist who has spent plenty of time with hunters in Pennsylvania while researching books said. “There’s this idea that being out in the woods is recreating the pioneer experience that they see as being the basis of America. They are living an experience where land is a resource controlled locally in an urbanised country that is changing around them.”

It’s the emotional charge, the quiet time in the woods (many hunters frown upon cellphone use and reject mechanised modern weaponry in favour of bows and muskets) that creates a virtuous circle, according to Bronner, that brings revenue and oversight to states through licenses while ensuring the stewardship of the land. “Anyone who spends time in the woods and watches wildlife would demand that we do more work on improving habitat.”

Theodore Roosevelt, the 26th president of the United States, perfectly embodied the belief that “true hunting” was a vital part of conservation.

Up until the end of the 19th century, it had been open season on American wildlife. Bison were considered so bountiful that people could shoot them from trains, while waterfowl were gunned down to provide plumage for hats.

But at the turn of the century nascent environment groups such as the Audubon Society, as well as a new breed of venerated “gentleman” hunters such as Roosevelt, Davy Crockett and Daniel Boone – the Boone and Crockett club exists to this day – pushed for change.

Roosevelt didn’t create the first national park – Yellowstone, perhaps the first reserve of its kind in the world, was established in 1872 under president Ulysses S Grant – but it was he who set out the moral imperative of protected areas for America’s natural wonders.

Even as he was heading west in order to hunt the continent’s big game before it disappeared, Roosevelt’s writing was pockmarked with sadness at the disappearing bounty. He wrotetimelessly that it is “vandalism wantonly to destroy or to permit the destruction of what is beautiful in nature, whether it be a cliff, a forest, or a species of mammal or bird.

“Here in the United States we turn our rivers and streams into sewers and dumping-grounds, we pollute the air, we destroy forests, and exterminate fishes, birds and mammals.”

As president, Roosevelt signed five national parks into existence and helped create the Antiquities Act, which allows presidents to unilaterally designate protected areas – which he used 18 times, most notably to safeguard the Grand Canyon.

Simultaneously his presidency spawned the US Forest Service to protect public lands where hunting, grazing and other activities are allowed, unlike in the more sacrosanct national parks. He helped draw the clear delineation between pristine areas almost frozen in time for species conservation, and areas for fishing and shooting and rampaging around on horses and, later, four wheel drive cars; a distinction that has endured in conservation management around the world. This sort of neatly divided mapping is by no means perfect – Cecil the lion didn’t know he had crossed an invisible line to an unprotected area; elephants will never have their long migration routes free of farmland and therefore irate farmers – but it at least fostered the idea that wildlife had a place too, that animals don’t actually provide an inexhaustible supply of targets for carefree hunters.

But even as he made these reforms, Roosevelt continued to embrace the American ideal of hunting as an activity for all. His great grandson Tweed Roosevelt says: “Hunting for Brits was an upper class activity, whereas we’ve gone to great lengths to make it an activity for the people… Sportsmen like Roosevelt created a concept of fair chase, rather than firing cannons at ducks. I don’t think he would support canned hunts.”

Here in the United States … we destroy forests, and exterminate fishes, birds and mammals.

But Roosevelt was also a keen, even obsessive, hunter, and saw no conflict in that: “Nothing adds more to a hall or a room than fine antlers when their owner has been shot by the hunter-displayer, but always there is an element of the absurd in a room furnished with trophies of the chase that the displayer has acquired by purchase,” he wrote in 1902. Two weeks after he finished his second term in the White House, Roosevelt embarked upon a 15 month shooting tour with the goal of bringing back a cornucopia of African wildlife to start a natural history museum in Washington DC. The former president and his entourage bagged thousands of animals, including a bull rhino in the Belgian Congo: he called the beast “a monster surviving over from the world’s past, from the days when the beasts of the prime ran riot in their strength, before man grew so cunning of brain and hand as to master them.”

Even then, Roosevelt’s huge kills sparked some public protest. These days, despite the claims by hunters that their money helps local communities and species, there is growing revulsion against the idea of big game hunting. There was barely constrained glee recently when Theunis Botha, a South African big game hunter, died recently after being crushed by an elephant that had been shot by a colleague.

An online petition mourning the elephant calls the incident “karma”. And palpable anger at Cecil’s death forced Palmer into hiding, a fate shared by Texas millionaire Corey Knowlton, who paid $350,000 at an auction for the privilege of shooting an endangered black rhino in Namibia in 2015. Knowlton said the three-day hunt would benefit the species but then faced death threats over his trip, and told CNN, which had accompanied him on the safari: “I think people have a problem just with the fact that I like to hunt. Being on this hunt, with the amount of criticism it brought and the amount of praise it brought from both sides, I don’t think it could have brought more awareness to the black rhino.”

Then there is the Trump family, breezily upending norms and expectations.

Donald Trump Jnr, the president’s eldest son, goes hunting with his bow most weekends and is referred to by his friends as the “Fifth Avenue redneck.” He has targeted elk and mule deer at home as well as “15 or 16 species” in Africa, where he has been pictured grasping a severed elephant’s tail and holding a dead leopard with his brother, Eric.

Last year, Donald Trump Jnr said the US Fish and Wildlife Service (USFWS) “should be encouraging American hunters legally and ethically hunting abroad, not hindering them.” He also called for wolves to be culled in the US west, claiming they deprive hunters of moose.

Junior is seemingly attempting to fashion a new type of “hunter” – invoking the spirit of Roosevelt while posing with big game body parts and viewing public lands as sites for shooting and mining and not much else.

“We have to make sure we’re heard,” he told Petersen’s Hunting. “Lately, we’ve been a forgotten group. I want to change that now and forever.

“And we are going to do whatever we can to make sure that any kind of Trump presidency is going to be the best since Theodore Roosevelt for outdoorsmen, for hunters, for our public lands, and for this country as it relates to anything in the great outdoors.”

This article was first published by The Guardian on 27 Jul 2017.

We invite you to share your opinion whether trophy hunting should be banned? Please vote and leave your comments at the bottom of this page.