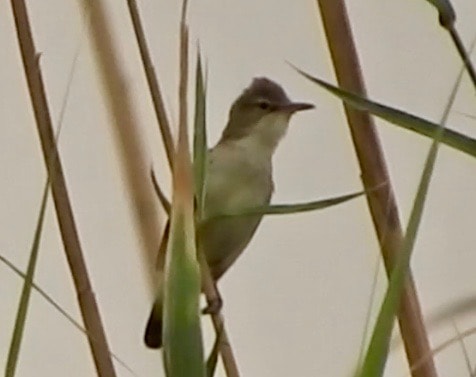 On a visit to Riyadh in May 2019, I headed to Al Ha’ir in the hopes of gathering further evidence Basra Reed Warbler Acrocephalus griseldis was indeed breeding there. This would be significant, if confirmed, as this species is currently listed as endangered on the IUCN Red List of Threatened Species, its decline understood to be due primarily to the dramatic loss of habitat in the heart of its breeding range—the once vast marshlands along the Tigris and Euphrates Rivers in Iraq and extreme southwest Iran. During the 1990s huge areas of the marshlands were drained as part of Saddam Hussein’s persecution of the Ma’dan tribe, also known as the Marsh Arabs, who depended on the wetlands for their livelihood.

The resulting habitat loss has been called one of the biggest environmental disasters of the 20th century. By the early 2000s only a small fraction of the marshes remained and, according to BirdLife International, research at the time suggested that, based on banding data from its winter range in east Africa, the Basra Reed Warbler’s population may have declined up to 70 – 80% since the 1970s. After the 2003 invasion of Iraq, efforts were undertaken to undo some of the damage by breaching embankments erected during Saddam’s rule and re-flooding the desiccated marsh basins. Thankfully, it is now believed that the Basra Reed Warbler’s population has stabilized and is likely recovering.

Perhaps the most intriguing development in the story has been the discovery of Basra Reed Warblers away from their traditional breeding grounds in the Mesopotamian marshes, suggesting that the pressures faced during the 20th century may have compelled small numbers to take up shop in suitable habitat further afield.

In 2007, two pairs were confirmed to be breeding in northern Israel, quite a distance away from the marshlands of Iraq, and in 2009 the species was confirmed breeding in Al Jahrah, Kuwait.

Given this newly discovered expansion of its breeding range and the fact that the species passes through Saudi during migration with significant historical occurrences around Riyadh, the chances are good that Saudi supports a small breeding population as well. The scant but telling evidence from Al Ha’ir points to this likelihood.

In 1996, roughly coinciding with Saddam Hussein’s aggressive draining of the Mesopotamian marshes, a breeding bird survey along the Riyadh River in Al Ha’ir between April 12 and May 5, encountered four long-staying individuals, three of which were singing males that appeared to be holding territories in the area. The birds were present from April 14 until the end of the survey period—a solid three weeks during the start of the breeding season—suggesting that these individuals were in no hurry to get back to Iraq, despite being flush with hormones, and very well could have been breeding there. Unfortunately, no further evidence was documented to confirm the suspicion. According to Mike Jennings, the author of the Atlas of the Breeding Birds of Arabia, in fact the species still has yet to be confirmed in Saudi Arabia.

Fast forward to May 19, 2018, when I discovered four Basra Reed Warblers myself in three different locations in thick patches of reeds along a flooded margin between the river and the edge of an adjacent pivot field. Single birds have been seen here in the past between 1996 and 2018, but all were put down as migrants. These birds were displaying the same behaviors noted in 1996—three singing males seemingly on territory, and at one point I also witnessed one of the males and what I assumed to have been a female appear suddenly at one location, agitated by the presence of a Common Moorhen Gallinula Chloropus climbing up out of the reeds near where the male had been singing a short time earlier. Reed warblers are notoriously difficult to see given their retiring habits and the deep reed beds in which they nest, but that particular morning I managed to shoot video of one of the males from a distance as he perched visibly and occasionally issuing the species’ signature churruc call.

Subsequent attempts to get eyes on the birds proved more difficult and were mostly flashes as they moved just out of view deeper in the reeds. I did, however, obtain better recordings of the other two males, having crept up to the edge of the reed beds, but eventually I had to head back to Al Ahsa—over three hours away to the east—without any further evidence to support the prospect that these were indeed breeding birds I encountered. I resolved to get back that summer to try to confirm but that proved unmanageable. As there were no other birders in Riyadh at the time, a follow-up visit would have to wait until the next year.

When I finally did make it back in May 2019, the water level was quite a bit lower but even still, along the same stretch where I found them the previous year, the river had exceeded its banks, creating the shallow, sluggish conditions that the Basra Reed Warblers prefer. I arrived just after sunrise at 5:25 AM and headed to the area they were last year. In the time I had, I only managed to locate a single singing male. He stayed out of sight the entire time I recorded his singing.

It was only after using playback before leaving that he appeared briefly before tucking back into the reeds again. So the jury was still out. No further proof of their breeding besides the fact that they appear to be returning to the same area each spring. I had hoped to clinch it at the end of the month when there might have been young birds about but again couldn’t manage another visit that summer.

The effort to confirm breeding in 2020 proved to be even more problematic. The coronavirus restrictions here prevented me from visiting Al Ha’ir back in May, when the reed warblers would have already arrived from East Africa and been actively singing. I was only able to make it out the end of June and was hoping that perhaps there might be clearer evidence of breeding at the site, such as adults carrying food or fledging young. Unfortunately, the conditions along the stretch of the river where I had observed them in 2018 and 2019 were far from ideal.

Where the water had extended past the edge of the reed beds and spread out onto the adjacent fodder field during the previous two years, I had found only dry and cracked earth, desiccated tufts of vegetation, and burnt-out edges to the reed beds themselves. The conditions required were much restricted and the depth along the water’s edge through most of that stretch dropped off quickly.

Mischa Keijmel, a birder based in Riyadh, attributed the sharply reduced flow through Al Ha’ir to greater demand for water further upstream—a large development project in the works apparently. The past winter had also been quite dry, with no significant rainfall since perhaps November of the previous year. Acrocephalus scirpaceus were in abundance, with many adults responding to pishing, but, unfortunately, no Basra Reed Warblers were detected.

If Saudi Arabia supports a breeding population of Acrocephalus griseldis, it’s likely heavily contingent on the conditions along this stretch of the river, where they’d been encountered several times in the past. If the flow of treated water out of Riyadh varies to the degree it has over the past three years and annual rainfall continues to average lower than in previous years and decades, then it seems unlikely that Saudi could sustain one. Further surveying and monitoring are required to identify where else along the river they may be occurring and if indeed they’ve successfully bred. Here’s hoping for a wet 2021!