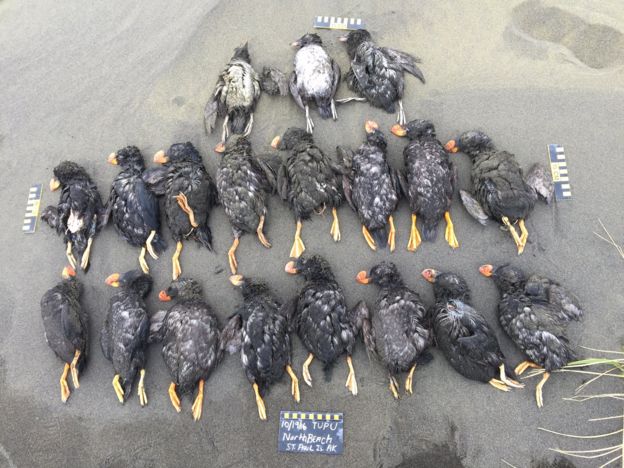 A new study into the deaths of thousands of Puffins in Alaska conducted by scientists and released this week has found that climate change played a role.

The researchers behind the report believe that the birds starved to death when the fish that they rely on as a staple of their diet migrated North as their natural waters around Alaska had become too warm for them to survive in comfortably.

Up to 9,000 puffins and other birds died as a result over the course of a few months with the mass-deaths discovered when their bodies began washing up on St Paul island in 2016.

This report, completed three years after the event, has established a potential cause for the first time, and says that the loss of vital food stuffs, along with the onset of molting, contributed to the large death toll.

The report’s abstract states that “Mass mortality events are increasing in frequency and magnitude, potentially linked with ongoing climate change. In October 2016 through January 2017, St. Paul Island, Bering Sea, Alaska, experienced a mortality event of alcids… with over 350 carcasses recovered.

“Almost three-quarters of the carcasses were unscavenged… suggesting ongoing deposition and elevated mortality around St Paul over a 2–3 month period… we… estimated all species mortality at 3,150 to 8,800 birds.

The event was particularly anomalous given the late fall/winter timing when low numbers of beached birds are typical…. Collected specimens were severely emaciated, suggesting starvation as the ultimate cause of mortality.”

The report went on, explaining why climate change may have led to the birds’ starvation. The authors wrote “Bering Sea food webs are particularly sensitive to bottom-up climate effects, as changes in atmospheric forcing impacts sea ice, as well as the extent of the ‘cold pool’, a lens of cold near-bottom seawater that acts as a refuge for cold-water associated species.

The report comes as the news is increasingly dominated by the potentially catastrophic effects of climate change, the lack of time left to stop it, and the protests of those who want world Governments to take serious action to reduce the contributing factors – namely the over production of carbon dioxide and other greenhouse gases that clog up the atmosphere, trapping in heat and amplifying the strength of the sun’s light.

Some action has been taken in recent years, with sources of cleaner fuels, such as wind, now booming, but reports such as this show why that simply isn’t enough to stop any further damage, let alone swiftly reverse the damage we’ve already done.

With any luck, continued exposure of events and studies such as this will reinforce the extent of the crisis and spur Governments, businesses, and ordinary people into doing what they can to stop it.