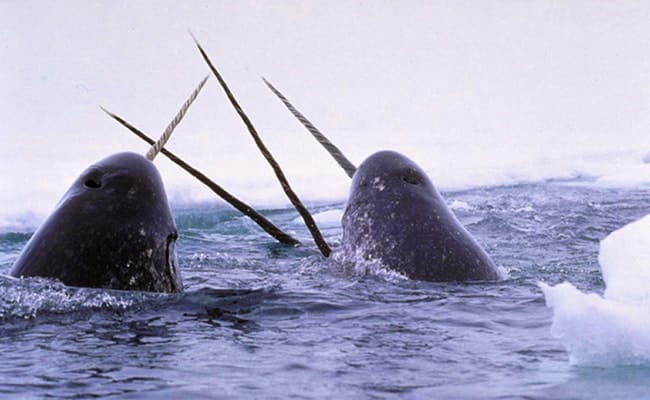 Scientists are marveling over never-before-seen footage of narwhals that has brought to light new evidence for what those unicorn-like tusks are actually used for.

Narwhals are toothed whales who live in the Arctic waters of Canada, Greenland, Norway and Russia, but they don’t actually have any teeth in their mouth. Instead, the males grow a long straight tooth, or tusk, that spirals out of their upper left jaw that can grow as long as nine feet.

This long, spiraled tusk is a unique feature that has gotten them dubbed ‘unicorns of the sea,’ but there’s been a lot of speculation about what they’re for and how they’re used.

The footage captured narwhals using their tusks to tap and stun Arctic cod before eating them, and is the first recorded evidence that they use their tusks to hunt.

“Documenting such novel behavior of a complex and difficult to study species that inhabits such a challenging environment is absolutely incredible.

These data prove the value of direct observation to understand animal behavior and ecology, but also highlight the important role of technology in modern science,” said Dr. Nigel Hussey, of the University of Windsor.

While the footage has confirmed the theory that they use them to hunt, they may also be used for other purposes, including sexual selection, breaking ice and echolocation. Last year, scientists studying narwhals in Greenland found that they have incredible directional sonar, likely because of the sensitivity of their tusks, which lack enamel on the outside and are incredibly sensitive.

The footage, which was captured by scientists from Fisheries and Oceans Canada (DFO), the University of Windsor, World Wildlife Fund (WWF) Canada, the Vancouver Aquarium, along with Arctic Bear Productions, also raises new questions about narwhals and opens up more avenues of research. Scientists hope that the finding will help raise awareness about narwhals and help increase conservation efforts in the Arctic.

Unfortunately, they’re threatened by development, ocean noise and climate change, among other things, but more information about important areas for them could help inform decisions that will keep them safe from disturbances.

“This footage, while also stunning to watch, will play a significant role in the future of narwhal conservation. As the Arctic warms and development pressure increases, it will be important to understand how narwhal are using their habitat during their annual migration. With this information in hand, we can work to minimize the effects of human activities on narwhal,” said David Miller, President and CEO of WWF-Canada.