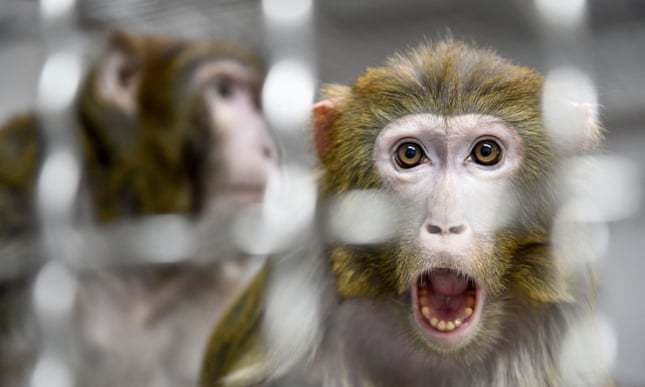 Every monkey held by Nasa was put to death on a single day last year, documents obtained by the Guardian show, in a move that has enraged animal welfare campaigners.

A total of 27 primates were euthanized by administrated drugs on 2 February last year at Nasa’s Ames research center in California’s Silicon Valley, it has emerged. The monkeys were ageing and 21 of them had Parkinson’s, according to documents released under freedom of information laws.

The decision to kill off the animals rather than move them to a sanctuary has been condemned by animal rights advocates and other observers.

The primates “were suffering the ethological deprivations and frustrations inherent in laboratory life”, said John Gluck, an expert in animal ethics at the University of New Mexico. Gluck added the monkeys were “apparently not considered worthy of a chance at a sanctuary life. Not even a try? Disposal instead of the expression of simple decency. Shame on those responsible.”

Kathleen Rice, a US House representative, has written to Jim Bridenstine, Nasa’s administrator, to demand an explanation for the deaths.

Rice, a New York Democrat, said she has been pushing for US government researchers to consider “humane retirement policies” for animals used in research. “I look forward to an explanation from administrator Bridenstine on why these animals were forced to waste away in captivity and be euthanized rather than live out their lives in a sanctuary,” Rice told the Guardian.

Nasa has a long association with primates. Ham, a chimpanzee, received daily training before becoming the first great ape to be launched into space in 1961, successfully carrying out his brief mission before safely splashing down into the ocean.

But the monkeys euthanized last year weren’t used in any daring space missions or even for research – instead they were housed at the Ames facility in a joint care arrangement between Nasa and LifeSource BioMedical, a separate drug research entity which leases space at the center and housed the primates.

Stephanie Solis, the chief executive of LifeSource BioMedical, said the primates were given to the laboratory “years ago” after a sanctuary could not be found for them due to their age and poor health. “We agreed to accept the animals, acting as a sanctuary and providing all care at our own cost, until their advanced age and declining health resulted in a decision to humanely euthanize to avoid a poor quality of life,” she said.

Solis said no research was conducted on the primates while they were at Ames and that they were provided a “good remaining quality of life”.

In recent years the US government has started to phase out the use of primates in research, with the National Institutes of Health making a landmark decision in 2015 to retire all chimpanzees used in biomedical studies. Critics of the practice argue it is immoral and cruel to subject highly intelligent, social creatures so similar to humans to such conditions.

However, other labs continue to use monkeys in large numbers – a record 74,000 were used in experiments in 2017 – with scientists claiming they are far better than other animals, such as mice, for studying diseases that also afflict humans.

Even when monkeys are retired from research purposes, the task of rehoming them in appropriate sanctuaries still proves haphazard.

“What tragic afterthoughts these lives were,” said Mike Ryan, spokesman for Rise for Animals, the group that obtained the freedom of information documents on the Ames primate deaths. “Nasa has many strengths, but when it comes to animal welfare practices, they’re obsolete.”

A Nasa spokesperson said: “Nasa does not have any non-human primates in Nasa or Nasa-funded facilities.”

This article was first published by The Guardian on 22 December 2020. Lead Image: A record 74,000 monkeys were used in experiments in 2017 in the US. Photograph: Jean-François Monier/AFP/Getty Images.

This is an abject disgrace.

Animals are here WiTH us, not for us