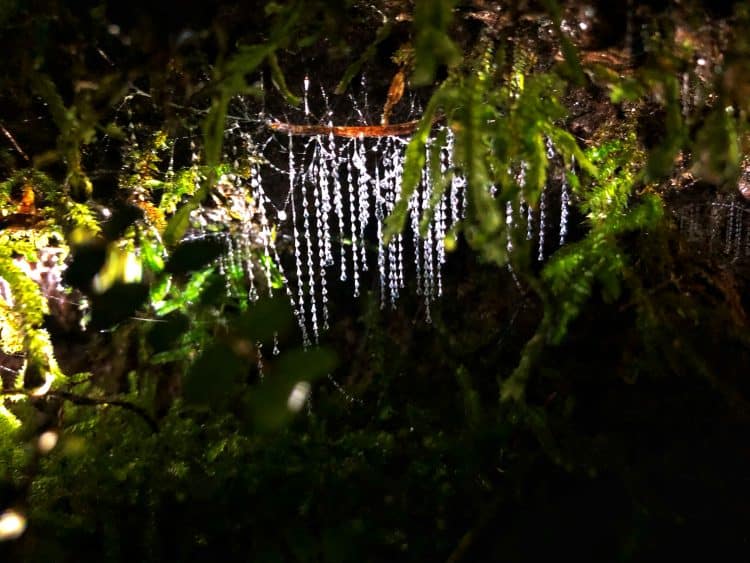 Lying 80 kilometres west of Sydney, the Blue Mountains National Park is one of the most popular bushwalking destinations in NSW. More than 8 million people visit the mountains each year trampling over 140km of tracks and trails. But what not many people realize, is that when the darkness falls and the trails are deserted, the nooks and crannies of the Blue Mountains light up with glowing lights like the starry sky.

The creatures responsible for nature’s mesmerizing light show are the two kinds of bioluminescent insects in the family Lampyridae: glow worms and fireflies. Although they glow for very different reasons.

Native to Australia and New Zealand, glow worms, that can be found in a few spots in the Blue Mountains all year round, are the larvae stage of a flying insect – the fungus gnat. Adult, fungus gnats do not feed during their short lifespan, so their larval stage – the glow worms, need to do all the feeding. And since they can’t move about rapidly, they have to make their prey come to them. And that’s why they glow.

Glow worms live in wet environments like caves and rock overhangs in rainforest gullies. In the Blue Mountains, they particularly fancy the rock walls near waterfalls, or better yet, rocky caves behind waterfalls.

To attract their insect prey, glow worms produce strings of silk, similar to spiders, and they coat their strings with beads of sticky mucous. Once an insect gets trapped in the sticky strings it becomes glow worms’ dinner.

To lure the insects to their death, glow worms produce a cold chemical light in their abdomens and as anyone who turned on a light outdoors at night knows, nocturnal insects find bright lights irresistible. Glow worms’ preference for living in dense colonies enables them to make their death traps even more appealing to their prey. When an entire colony lights up a rock wall, it becomes indistinguishable from the starry sky. I have certainly been fooled before.

While glow worms occur only in Australia and New Zealand, fireflies are more common elsewhere. Until very recently, I wasn’t even aware that fireflies could be found in Australia as well. Only for a few weeks each year and only in a few spots along Australia’s east coast. Likely, Blue Mountains is one such secret spot.

During the month of December, the humid rainforest areas around Mt Wilson light up with a different kind of Christmas lights. Fireflies shine when glow worms can’t – during the adult stage of the insects’ lives. Just like glow worms are not worms, fireflies are not flies. They are nocturnal beetles closely related to glow worms.

Like their glow worm relatives, adult fireflies do not feed. They don’t even have mouthparts. Their short adulthood is dedicated to the single purpose of reproducing. It is in their quest for love that fireflies produce the light – to find each other in the dark.