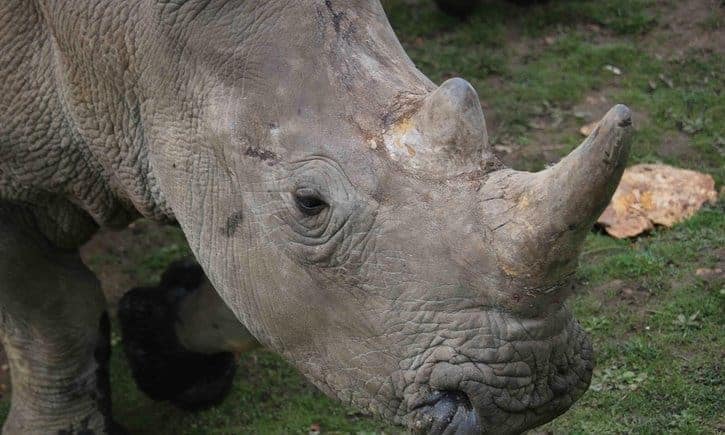 Poachers have broken into a French zoo, killing a four-year-old white rhinoceros and sawing off its horn.

Keepers found the dead animal, named Vince, in the African enclosure of the zoo at Thoiry, west of Paris, on Tuesday morning. It had been shot in the head and its large horn removed with a chainsaw.

The poachers fled before they could remove the animal’s second horn, either because they were disturbed or because their equipment failed, police said.

Authorities described the incident as the first of its kind in Europe.

The poachers forced a grill at the rear entrance to the zoo, near the rhinoceros enclosure. They then broke through two further locked doors into the building containing three white rhino on Monday night.

“It’s possible the thieves didn’t have time to take the others,” a police spokesman said.

Park director Thierry Duguet said the attack was “unbelievable” and that Vince had been one of the most popular attractions at the zoo.

“It’s extremely shocking,” Duguet told 20 Minutes newspaper. “An act of such extreme violence has never happened before in Europe.”

Vince, born at Burgers’ zoo in Arnhem in the Netherlands at the end of 2012, arrived at Thoiry zoo in March 2015. The zoo said he belonged to a subspecies of southern white rhinoceros that is “extremely threatened”.

The zoo announced the news on its Facebook page. It said the two other rhinos in the enclosure, Gracie, 37, and Bruno, five, had “escaped the massacre” and were unharmed.

“Vince was found this morning by the keeper who was very attached to him and is deeply upset. This odious act was carried out even though there were five staff members living on site and security cameras.”

It said the animal’s second horn had been partially cut “leaving us to think the criminals were disturbed or their equipment failed”.

Friends of the zoo on the social network site expressed shock and anger at what they called a “barbaric act”.

A rhinoceros horn has an estimated value of between €30,000 and €40,000. Detectives say there is an established trade network in illegally poached horn between France and Asia.

“The theft of rhinoceros horns are rising across Europe, but it’s the first time an animal park has suffered an attack leading to the death of a rhinoceros,” the zoo said.

“Animal parks throughout Europe have been put on alert to look out… to get into these places they have to climb 3.5 metre fences, go through padlocked doors. It’s not easy to kill a rhino weighing several tonnes just like that. It’s a job for professionals.”

The white rhino is an endangered species, with an estimated 21,000 remaining in the wild across the world, mainly in South Africa and Uganda. Their horns are sought after in Asia, where they are valued for their supposed aphrodisiac qualities.

In Zimbabwe last autumn, the authorities announced they would remove the horns of 700 adult rhinoceros to dissuade attacks from poachers.

This article was first published by The Guardian on 07 Mar 2017.