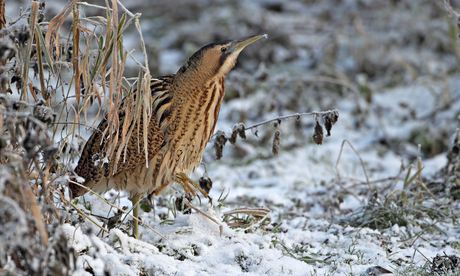 Military technology used to hunt down insurgents in Afghanistan has been taken up by Britain’s biggest nature conservation charity to safeguard some of the country’s rarest birds.

The Royal Society for the Protection of Birds (RSPB) is using a remotely controlled drone to spy on the nests of endangered breeds and monitor the progress of reintroduced species.

It was created by Nigel Butcher, the charity’s answer to James Bond’s lethal gadget inventor Q, at its new Centre for Conservation Science in Sandy, Bedfordshire. “A lot of our stuff filters down from military use,” Butcher said. “We built the ‘copter about a year ago and have added bits and pieces to it since, like radio tracking, thermal imaging and wide-angle cameras.”

Breeding patterns of bitterns and marsh harriers can be seen without disturbing precious habitat, and the RSPB is also using the drone to monitor how cranes and corncrakes are faring as they are reintroduced to the UK.

It also plans to reach inaccessible nests over wetlands for the BBC Spring Watch series at the Minsmere reserve on the Suffolk coast.

“In the case of a marsh harrier, we might want to use it to check on the state of a nest without traipsing in,” Butcher said. “We don’t like to put cameras close to nests until the eggs have hatched, because the birds can be prone to deserting the nest.

“But with the drone you can scoot it round to confirm the state of the nest. The alternative is having eight or ten people trampling through a reed bed in knee-high waders causing a lot of disturbance.”

The main advantage of the craft is how quiet it is. “It only has six little electric motors so it is almost drowned out by ambient sound and the wind, and doesn’t disturb the birds,” Butcher added.

The thermal imaging camera can track birds and mammals at night, when many species are most active. And like a combat drone, the RSPB’s model can be piloted remotely using a live video feed.

The team prepared to capture night footage of the elusive corncrake in the Cambridgeshire Fens by practising on chickens. “It’s tricky to get heat signatures off birds because the feathers are such good insulators. We did some trial runs with my wife’s chickens, and found that the head and feet give off a signal,” Butcher said.

The preparation paid off. The team filmed grainy footage of the bird in thick reed beds. “We were very pleased with that because it’s not been done before with a thermal imager,” said Andrew Asque, Butcher’s assistant.The breakthrough came on the RSPB’s Nene Washes reserves, a remote area of Cambridgeshire fen, where the charity is trying to reintroduce corncrakes.

Landrails, as they are also known, with their distinctive scraping call, were once a common feature of the English countryside, and were celebrated by the 19th century rural poet John Clare. But they were driven to near extinction in Britain by modern farming methods.

But despite its benign purpose, the project and the growing use of drones for international conservation projects has prompted alarm about privacy.

Chris Sandbrook, a lecture in conservation leadership at Cambridge University, said: “What the RSPB are doing with drones sounds like a good thing, and I’m sure they will be accompanying it with some sensible messaging to reassure the public that there are not al-Qaida operatives hiding in reed beds,” he said.

“But if you lived next to an RSPB reserve and saw one of these things flying around at the end of your garden, and didn’t know why it was there, you might be a bit worried.”

Sandbrook is more concerned about the use of drones on international conservation projects, such as a project to protect mountain gorillas in Uganda.

He said if drones were used on such projects they could undermine years of work to build up vital support and trust of local people. “Drones might be great way of collecting data, or even cracking down on poaching, but they might make people feel spied upon and disenfranchised. In these kinds of place if local people don’t believe in the conservation project, it really can’t work.

It is one thing to look at corncrake nest, it’s quite another if you are taking images of people and their behaviour.”

With the cost of unmanned aerial vehicles dropping, drones are becoming an affordable conservation tool in the fight against poachers and to protect endangered species such as the elephant and rhino.

The recently established ShadowView Foundation, which provides drones for conservation and humanitarian relief operations, has installed systems in South African game parks, in Uganda, Tanzania, and other locations vulnerable to illegal wildlife trade.

In Namibia, the World Wildlife Fund (WWF) has a Wildlife Crime Technology Project with an “eyes in the sky” surveillance project to fight poachers, and regards the drones as a huge tool in their arsenal. The World Wildlife Fund (WWF) has also introduced drones in Nepal’s national parks, home to endangered rhinos, tigers and elephants. “As the global poaching crisis escalates, WWF is excited by the potential of technologies such as UAVs to aid rangers on the frontline and better protect Nepal’s natural heritage,” said Shubash Lohani, deputy director of WWF’s Eastern Himalayas program, as the first drones were introduced.

The Sea Shepherd conservation society was among early pioneers in the use of UAVs when, in 2011, it used drones to locate the Japanese whaling fleet hearing for the Antarctic.

In Europe, the marine watchdog group The Black Fish, has used drones to monitor large areas of the Mediterranean.

This article was written by Matthew Weaver for The Guardian