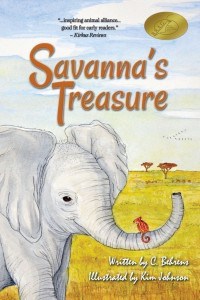 In Behren’s first illustrated children’s book, Savanna’s Treasure, a field mouse and a young elephant form an unlikely friendship as they seek refuge from evil poachers. Shamba, a friendly Serengeti field mouse, lives at an American zoologist’s campsite with his friend Panya.

The two mice enjoy the American’s food and protection from the gnarly gang of poachers who entrap field mice. One day, when the mice wander offsite in search of entertainment, they return to find the camp’s been burned to the ground.

In place of Sarah, their American protector, they find a black bandanna marking the recent presence of the poacher gang. Fleeing the site and losing Panya, Shamba encounters a small elephant named Kali and catches a ride on her tail to safety from the poachers.

Shamba befriends Kali and her elephant family as they learn that many of the Serengeti animals now share the common goal of escaping the evil poachers. Kali’s wise grandmother Savanna devises a plan for the elephants to safely migrate, and the elephants give Shamba a ride as they embark on their great journey.

Along the way, Shamba and Kali meet other animal friends, united in their evasion of the poachers. However, more danger lies ahead, and the young animals must bravely fight for their survival. Brief chapters and easy-to-follow language make this story a good fit for early readers. A few simple black-and-white illustrations highlight moments throughout the story.

At times, though, Behren’s descriptions of some of the more action-packed sequences are a bit convoluted; more illustrations might facilitate a young reader’s understanding of the detailed events being described.

Ultimately, the story shows how the animals’ abilities to overcome their differences and join as allies, along with the help of their human friends, aid them in their success.

Some readers, however, might wonder what happens to other animals at the hands of poachers. A typical good guys/bad guys story enriched by an inspiring animal alliance.

Savanna’s Treasure was first reviewed by Kirkusreviews.com on 18 June 2014 and is available  for direct delivery from Amazon in paperback or Kindle formats.