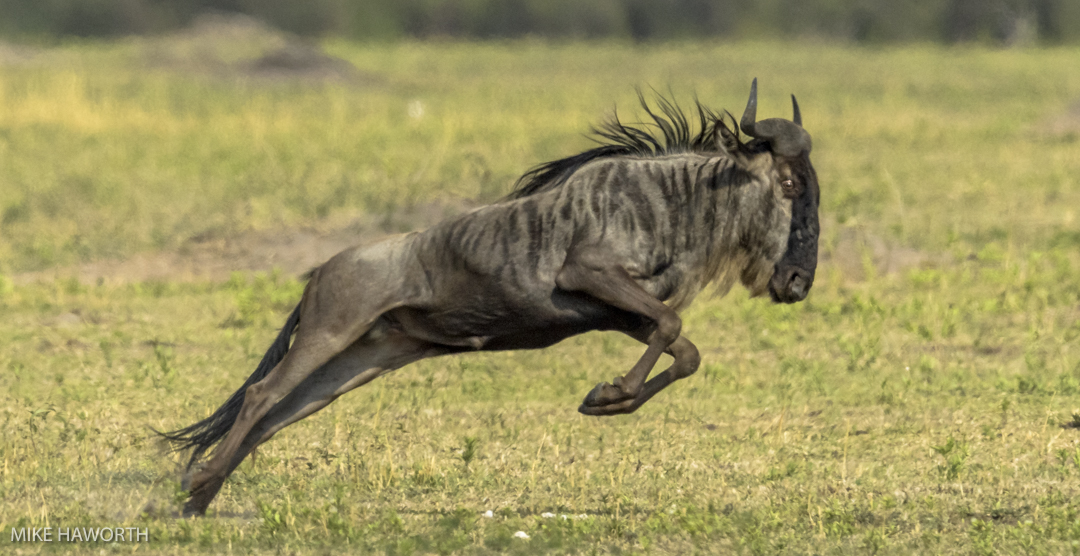 The annual migration of wildebeest and other grazing herbivores across the Serengeti-Mara ecosystem is one of the greatest spectacles in the natural world. The Serengeti is well known for its vast herds of wildebeest and zebra which migrate in a clockwise route from Ndutu in the south around February and March up along the western side of the Serengeti through the western Corridor around May and June and on up to the Masai Mara arriving there from late July through to September.

The migrating herds then follow the rains back down to the short grass plains of Ndutu in time for calving season around February each year. The down leg back to Ndutu is usually along the east side of the Serengeti. Wildebeest are known to have a very good sense of smell and are thought to be able to smell rain up to 25 kilometres away. The migration encompasses around 1.5 million wildebeest, 200,000 zebra, 18,000 eland and 500,000 Thompson’s gazelle. Needless, to say thethe resident predators take full advantage of thepassing feast.

There is a great diversity and abundance of herbivores in the Serengeti. These herbivores include eland, Debussa waterbuck, wildebeest, Coke’s Hartebeest, Topi, Impala, Grant’s and Thompson’s gazelles, zebra and buffalo. There are also the smaller herbivores such as reedbuck and duiker.

By mid-September, the migrating herds had passed through the Western Corridor section of the Serengeti National Park some three months earlier. It was very evident that the migration has passed through as the grass had been well and truly eaten down. There was still water from the infrequent rains in September but the grasses were only just beginning to recover. The majority of the wildebeest, zebra, topi, eland and Thompson’s gazelle migrate as part of the mega-herd, but not all. A fraction of these herbivores stay in the western corridor. They stay in sufficient numbers to enable the territorial predators such as lions, hyaena, cheetahand leopardsto survive through the lean time.

Many of the wildebeest left behind are bulls which stand in their demarcated territory. This particular bull was full of the joys of spring bucking and prancing around just for fun, by the look of it.

Another lone wildebeest bull moving around in his territory.

“The earth exists for all beings, not just human beings.”

We saw many topi in the western corridor. These antelope are a sub-species of a tsessebe. They look like hartebeest. Their coats have short hair and have a lovely sheen to them. The topi are very quick and if they see the predator in time they can usually out run them. The next image shows a topi flying with all four hooves off the ground.

Topi are incredibly quick and have been known to reach speeds in excess of 80kms per hour. They also show off their strength and prowess with stiff legged prances like a lipazzaner and bound on all fours, like gazelles.

“To watch a Topi lope, then dash and race, and pronk and prance, reveals a sense of power and joy well beyond the pure flight response.”

The topi has a striking reddish-brown body colour and distinct black patches on its face and just above its leg joints and greyish shoulders and flanks.

Topis are gregarious but when one male intrudes on another male’s territory, the two go down on their knees to fight with their horns in what becomes a pushing match to establish dominance.

Male topis have their own territories which they mark with dung and they also mark grass stems in their area with a secretion from their preorbital gland. The can stand on these mounds for a long time trying to be noticed.

“Be curious not judgmental.”

One of the herbivores which does not migrate is the buffalo. We found a few large herds in the Western Corridor. Presumably this is what keeps the lions going through the lean phase from August to May. 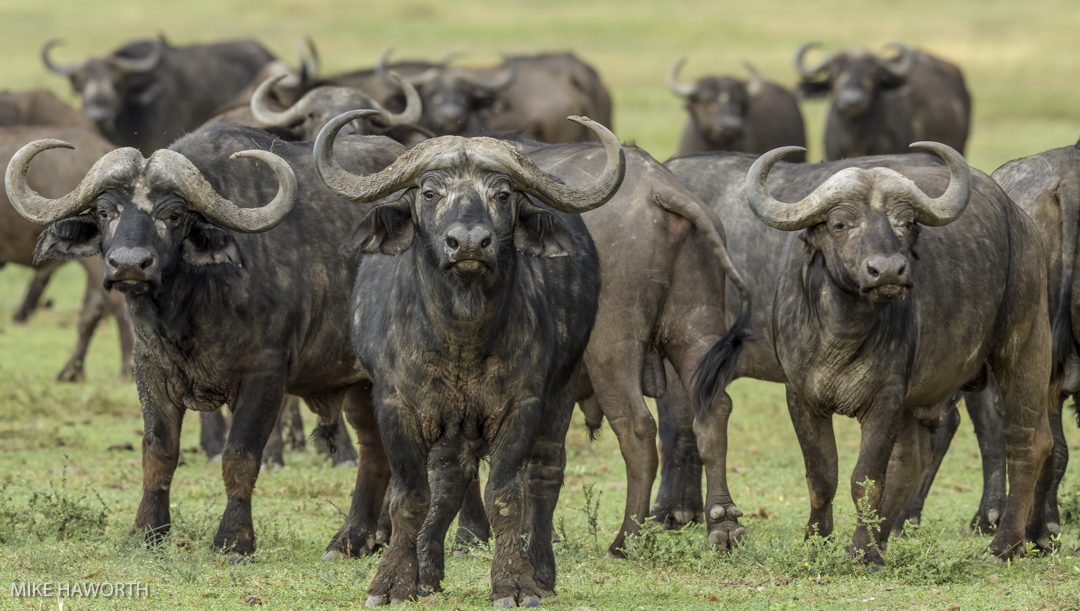 This is a strong animal with attitude. Buffalo will always look directly at you and lift their head and look down their noses at you. This was one of the bulls protecting the one flank of the herd. He was not about to take any nonsense from anything.

“Nature’s drama is never the same. Expect the unexpected it is sometimes low down, sometimes high up, sometimes fast, and sometimes slow. Each time mother nature reveals a little more, and each time you get a sense of how much you have still to learn.”

Another herbivore which does not migrate is the Masai giraffe. Giraffe have different patterns much like a fingerprint, but giraffe in certain regions have a particular patterntype.

This was bull giraffe using his full extension to browse on his favoured part of the tree.

Another group of Masai giraffe seen on the way to Nyasiriro plains. It is not often you see giraffe lying down but this individual must have felt secure because it could not get up quickly if there was a threat.

A family group of Masai giraffe down the road passed the Grumeti landing strip.

A single female eland down near the water pool dammed by the road embankment. Eland are very wary and will normally walk or run away from a vehicle. This must have been a young adult judging from its size and the size of its dewlap, the flap of skin below its neck. 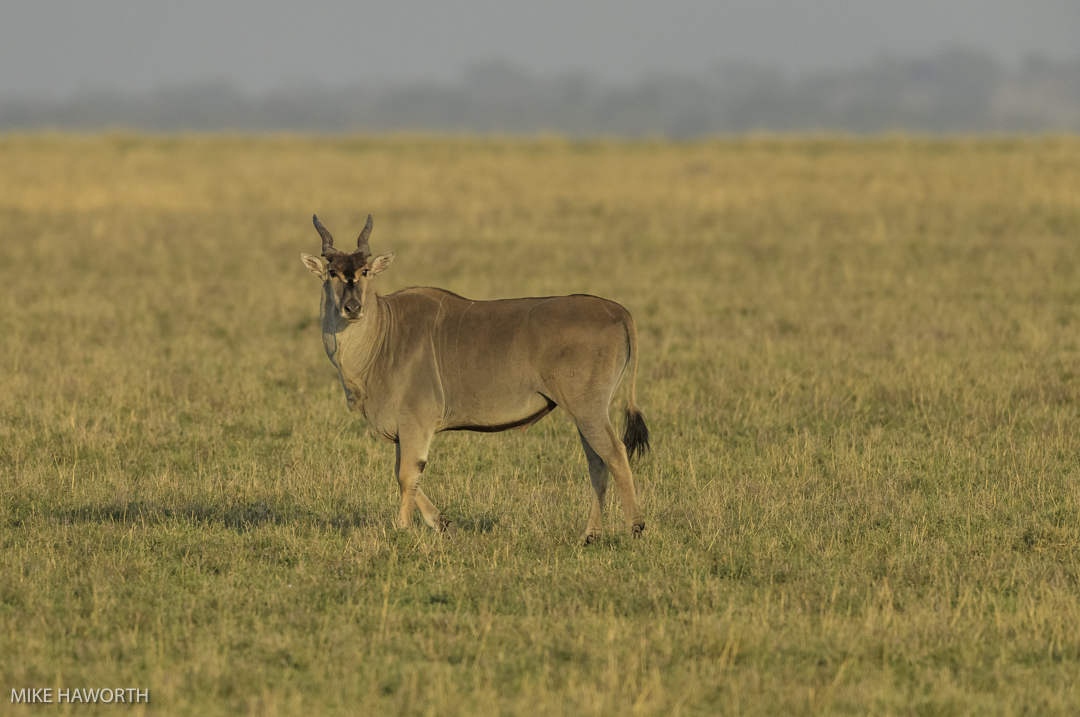 Grant’s gazelle are bigger with lighter colouring and have no dark brown side stripe like the Thompson’s gazelle.

Wildebeest and Thompson’s gazelle grazing together on the open plain.

A female Thompson’s gazelle and her fawn. They stopped to have a look around and in a split second were off.

You may notice the lack of zebra images. While we saw zebra, we do not see many and I did not get any images interesting enough for this post.

“The very essence of instinct is that it is followed independently by reason.”

What I find amazing is that all the herbivores feed on different parts of the savanna. According to the WorldWildLife.org, different herbivores tend to feed on different plant species and on different parts of a plant. This reduces competition and enables a grazing sequence by different ungulate species. They eat different types of fauna, be it buds, leaves, or stems. Furthermore, some herbivores prefer areas closer to woodlands and others open woodlands and others open grasslands. Kudu prefer thickets in woodlands, impala prefer savanna, Grant’s gazelle prefer herbs and shrub’s lower foliage, eland eat shrubs’ upper foliage, wildebeest usually feed on a wide variety of nutritious, short grasses, and topi tend to eat long grass leaves. Giraffes have no competition at tree top level. Buffalo are able to eat long fibrous grasses so tend to clean up grazing areas in the Serengeti.

“What is life? It is a flash of a firefly in the night. It is the breath of a buffalo in the winter time. It is the little shadow which ruins across and loses itself in the sunset.”

You can also tell the type of food that herbivores eat by their size and shape of their muzzle. The group ofherbivores classified asruminants have specialised stomachs. and lack upper front incisors and have a dental pad instead. This feature is especially evident in giraffe, buffalo and wildebeest.