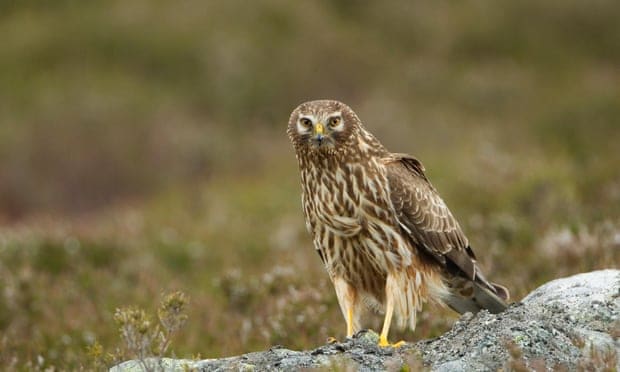 Hen harriers are 10 times more likely to die or disappear from or near to English grouse moors than any other habitat, according to a long-term study which reveals the scale of the illegal persecution of the endangered raptor.

An analysis of hen harriers over a decade found 72% of 58 satellite-tagged birds were confirmed or considered “very likely” to have been illegally killed. Just 17% of juvenile hen harriers survived beyond their first year around grouse moors in northern England and southern Scotland, compared with 36% across the Scottish mainland, where persecution has also been recorded, and between 37% and 54% on Orkney, where there are no grouse moors.

The hen harrier is almost extinct as a breeding bird in England, despite scientific studies indicating there is suitable habitat to support more than 300 pairs on English moorland. Conservationists fear the protected bird is being illegally killed by some gamekeepers because it eats red grouse. However, because the birds are killed in remote places, often on private estates, there is seldom evidence of wrongdoing and prosecutions are rare.

The study of 58 birds, fitted with satellite tags by Natural England researcher Stephen Murphy, and published in Nature Communications, found just seven were still flying at the end of the 10-year study period in 2017. Of the dead birds which were recovered, postmortems showed that five had died of natural causes and four had died because they were illegally killed, while the tags of another four birds had failed. The vast majority, 38, simply disappeared, their tags abruptly ceasing to transmit data with no indication of malfunction.

The tags revealed a disproportionate number of hen harriers had been flying over grouse moors in the week before their disappearance.

Prof Steve Redpath, the chair of conservation science at Aberdeen University and co-author of the study, said: “The killer bit is that these tags are suddenly ‘failing’ on grouse moors much more than you would expect by chance. If it was tag failure or some other cause we’d expect to find tags on [dead] birds. There’s plenty of food, few predators and hardly any wind farms so it’s hard to think of another possible explanation.”

When a tagged bird abruptly stopped transmitting data, research staff extensively searched around its last-known location. “Carcasses were rarely recovered,” the study reported, “presumably due to suspected illegal killing and carcass disposal”. Of three birds found shot dead, all three had been shot in the legs, injuries that enabled them to fly on for a short while and evade predators. When hen harriers had been killed naturally, by a fox for example, their tags were usually tracked down and retrieved.

Researchers ruled out technological failure as well. According to Redpath, the failure of a satellite tag can often be predicted because data transfer becomes more intermittent or erratic temperature readings are given off before it fails. The study’s tag failure rate of 7% compared to another scientific test of the same tag technology, which recorded a 6% failure rate.

Of the lack of definitive evidence for the reason behind the birds’ demise, Redpath said: “Why are these birds failing on grouse moors by a much higher rate than expected by chance? We want to be as unbiased as we can, we are just looking at the information, and we can’t think of another explanation.”

Stephen Murphy, who led the data collection, said: “Natural England welcomes the publication of this study, which demonstrates the value of tagging as a legitimate conservation tool. These analyses are a significant step in understanding the fate of tagged hen harriers, and confirm what has long been suspected – that illegal persecution is having a major impact on the conservation status of this bird.”

The findings come after the high court last week found in favour of the legality of a “brood management” trial licensed by Natural England. In the trial, hen harriers found nesting on grouse moors will have their chicks removed and reared in captivity, with juvenile birds then released into the wild away from the moors. The scheme is intended to reduce the illegal killing of hen harriers on grouse moors.

The RSPB and the conservationist Mark Avery challenged the legality of what he called “brood meddling”. The Moorland Association, however, backed the scheme, saying it “should deliver a sustainable and well-dispersed hen harrier population” across northern England.

Redpath added: “It seems pretty clear from our data that self-regulation [by grouse moors] isn’t working. I’m interested in testing the idea of brood management. In theory that could lead to having more hen harriers and less illegal killing. We should be able to see if that’s true or not if the trial is allowed to go ahead.”

This article was first published by The Guardian on 19 Mar 2019.