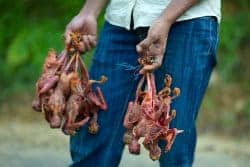 This is a documentation of the shocking massacre of tens of thousands of migratory Amur falcons (Falco amurensis) in the remote state of Nagaland in India’s northeast.

We estimate that during the peak migration 12,000 – 14,000 birds are being hunted for consumption and commercial sale everyday.

We further estimate that a mind-boggling 120,000 to 140,000 birds are being slaughtered in Nagaland every year during their passage through the state.

This is probably the single largest congregation of Amur falcons recorded anywhere in the world and it is tragic that they meet such a fate.

Our team has alerted all appropriate authorities in Nagaland. Government officials we spoke to have committed to put an end to the slaughter and have initiated specific action steps outlined below.

Conservation India will continue to monitor and report on the situation.

It is significant to note that India, as a signatory to the Convention on Migratory Species (CMS), is duty bound to prevent this massacre, provide safe passage, as well as draw up appropriate action plans for the long-term conservation of this bird.

In the recently concluded Convention on Biological Diversity (CBD), of which India is the president for the next two years, the importance of CMS in conserving species, and especially in stopping bushmeat hunting, was repeatedly stressed.

In October, huge numbers of Amur falcons arrive in northeast India from Siberia en route to their final destination — Somalia, Kenya and South Africa. This handsome little raptor has one of the longest migration routes of all birds, doing up to 22,000 km in a year. The birds are unusual in that they migrate a large distance over the sea and also continue their journey at night.

In October this year, a group of us (Ramki Sreenivasan from Conservation India, Shashank Dalvi, Bano Haralu, Rokohebi Kuotsu) travelled to Doyang reservoir in Wokha district to check out information that thousands of falcons were being hunted annually on the banks of the Doyang reservoir during their passage through Wokha district, Nagaland. The trip confirmed our worst fears.

Doyang is a rockfill dam and hydroelectric plant on the Doyang River, a tributary of Brahmaputra, 30 km from Wokha town in Nagaland run by the North Eastern Electric Power Corporation (NEEPCO).

On Oct 21, as we were reaching Doyang reservoir at 0830hrs, we found two women walking along the road openly with about 60 skinned birds that turned out to be amurs. This was our first encounter with the species. We saw the dead birds even before we saw the live ones.

Almost immediately, we saw thousands of amurs on the transmission lines along the mountain ridge. They seemed to travel overnight and reach Doyang during the early hours. They seemed to use these wires for resting and hawking insects. Amurs are known to be wholly insectivorous (Irwin 1981).

Here we estimated ~6000 Amur Falcons at 0840hrs. This count was only from the wires visible to us, and the wires stretched for hundreds of meters in each direction (see attached slideshow). The next morning (Oct 22), at 0630hrs we counted ~12,000 birds on the same wires and ~23,000 birds flying above the Doyang reservoir. Later at 0830hrs the birds were seen using transmission lines. The numbers dropped considerably and by 1230hrs, very few falcons were seen on the wires.

Over the course of the day, we observed 12 hunters on the main road carrying between 60-200 birds per head totaling over a 1000 dead birds carried to their homes or local markets and even door-to-door selling.

The amurs spend the day on the transmission wires (almost entirely inaccessible to hunters) and descend to forested patches along the banks of the reservoir to roost (see map). The hunters ruthlessly exploit this particular behavior and set-up huge fishing nets (30-40m long, 10-12m tall) all over the roosting sites.

We accompanied one hunting group (of 4 hunters) to the other side of reservoir by rowboat where we saw several other hunting groups. Hunting groups consisted mainly of four hunters; some parties had two.

Birds get caught in the nets in large numbers. These birds get tangled in the nets while they come to roost during late evenings or when they leave the roost early in the morning. The nets were permanent and the hunters come every morning to remove the trapped birds. The nets were observed over the entire roosting area giving virtually no safe area for the birds. Branches and paths were cleared to set up the nets.

Each hunting group had set-up at least 10 nets. On an average, 18 birds (18.30, n=23) were caught per net; hence each group catches about 180 birds per day. This was confirmed with interviews with hunters. We were also informed that about 60-70 hunting groups operate every day. This means during the peak migration about 12,000 to 14,000 birds are caught everyday. This obviously results in a loss of very significant number of birds from population everyday. This year hunters started netting on 19th Oct (interview with hunter) and the netting will apparently continue till the end of migration. According to hunters the peak migration lasts 2-weeks (our group will confirm this over the course of the next week or two, plus will study it next year). Assuming just 10-days of peak migration through Doyang, this suggests a shocking 120,000- 140,000 birds removed from the population every year, and more if the migration lasts longer or if there are more hunting sites in the area (neighboring villages, districts, etc.). This number doesn’t include birds potentially killed using guns, catapults, etc. — a widespread and accepted practice amongst Nagas.

The captured birds are kept alive in mosquito nets or cane baskets near the nets so they can be exported alive to the customers and markets. From cane baskets, the birds are transferred to poles for ease of carrying into villages and towns. Birds eventually die in the process and these birds are de-feathered / plucked (like poultry) and smoked for sale (longer shelf life).

Each bird is sold for a price between Rs. 16-25 (always sold as number of birds for Rs. 100 ($ 1.9 / £ 1.2). This sale usually happens door-to-door in Pangti village (where most hunters are from) as well as nearby Doyang and Wokha towns. Hunters (and sellers) know that Amur killing is illegal and banned by the Deputy Commissioner (Wokha district) since 2010 vide an issued order (Order no: JUDL-13/DR/2008-09/ Dated, Wokha, the 16th Nov. 2010). We also came to know about a few Amurs on the sale in open markets in Dimapur, in the plains far away.

It is still a mystery where huge numbers of dead amurs go everyday, as the local villages cannot absorb such numbers for their consumption. One of the hunters told us that two pick-up trucks from Dimapur were to pick-up the birds from Pankgi village (we couldn’t confirm this and passed on the information to the District Commissioner and Superintendent of Police). It is critical to understand where the bulk of the birds go.

By the end of the day, with the stench of smoked amurs in our heads, the scale and the ruthlessness of the massacre numbed us.

The roosting place is localised (one specific bank of the reservoir) and can easily be sealed off by the authorities (Deputy Commissioner, Superintendent of Police, North Eastern Electric Power Corporation (NEEPCO) and Forest Department).
Gain an understanding of and seal trade of amur meat mainly in big towns like Dimapur, Kohima.
Aggressively follow-up on the enforcement of the DC’s ban with Forest Department, Police, local communities and the Church.
Create awareness of the ban and the legal consequences (fine) in all villages including Pangti, Wokha, Doyang and Sungro.

Progress after our complaints

On the very same day as our verbal complaint (Oct 22nd), the dynamic Deputy Commissioner (DC) of Wokha district issued a fresh order against hunting of amur falcons (see new and earlier orders). This order was also carried in local newspapers. He also intimated the superintendent of police of Wokha about the killing and the potential trade in amur meat. He also alerted all community leaders in the area to enforce the ban. He set-up a meeting for our team member Bano Haralu to address the village leaders on 29th October 2012.
The Divisional Forest Officer (DFO) of Wokha district Mr. Supongtakshi Aier and a district administrator addressed approximately 50 village heads, council members and student bodies of Pangti, Sungro and Akhotso villages in Pangti (since most hunters are from Pangti, the village closest to the Doyang reservoir).
The government officials categorically stated that any ongoing trapping and killing of birds after the DC order was a violation of the law and it would not be accepted. The respective village representatives were asked to inform their communities about the order and that violators would be fined. Village heads have agreed to inform their communities about the status of the Amur Falcons and to spread the message of being “guardians” to the birds rather than being “destroyers”. However, they expressed helplessness to put a total stop to the killing if some measures are not put in place to replace the “economy”generated by the killing of the birds during this season. The govt. has to address this on priority before the next season.
The Chief Wildlife Warden of Nagaland Mr. T. Lotha has issued instructions to his staff to seize all traps found in the area and has warned of stern action including arrests against offenders. Forest guards and personnel have been on duty since, and will remain till the end of the migration to monitor the situation. They have also begun to confiscate all live and dead birds caught by villagers. Live birds have been released and dead birds burnt. In some spots, nets put up by hunters have been removed.
A more robust and proactive plan is being thought out to be effectively implemented next year in the month of September a month before the migration season.

The issue has been brought to the notice of the Minister of Environment and Forests, Smt. Jayanthi Natarajan, following the meeting of the standing committee of the National Board for Wildlife (NBWL) on Oct 31st, 2012 in New Delhi. The director of BNHS and member of NBWL, Dr A R Rahmani has written to the Hon’ble Minister to request the Chief Minister of Nagaland as well as the forest department of the state to immediately stop the massacre, and draw-up a long term conservation action plan for the species.
India has repeatedly pointed out that migratory birds are killed on their way to India in other countries — the primary reason why the Siberian Crane is now locally extinct in India. This incident goes to show that bloody, seasonal hunting sprees targeting migratory species is happening in India too, and we have to take immediate action to stop this.

The Amur Falcon is a complete, long distance, trans-equatorial migrant (Bildstein 2006). It has one of the of longest migration routes of all birds — doing upto 22,000 km in a year — from eastern Asia all the way to Southern Africa and back. It also is unusual in migrating over sea and migrates during the night (Meyburg 2010).

Migrating birds leave their Asian breeding range and travel to northeast India and Bangladesh, where they fatten up while staging for overland flights over peninsular India (Ali and Ripley 1984). Subsequently, they undertake the longest regular overwater passage of any raptor, crossing over the Indian Ocean between Western India and tropical East Africa, a journey of more than 4,000 km, which also includes nocturnal flight (Bildstein and Zalles 2005). This species is finely attuned to the strong monsoon tailwinds, which results in its late arrival in eastern Africa in autumn (Ash and Atkins 2009). Migrants arrive in their southern African winter range in November-December and depart by early May (Mendelsohn 1997). This species is an “elliptical migrant” (Kerlinger 1989), and its return route back to its breeding range is largely overland and to the north and west of its southbound route (Bildstein and Zalles op cit.).

This article was written by Shashank Dalvi and Ramki Sreenivasan and published by Conservation India.