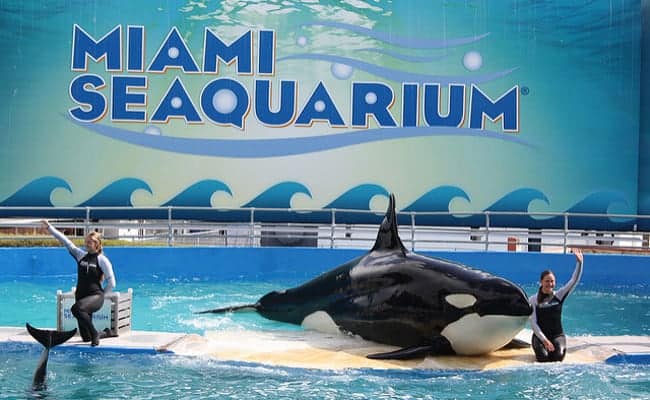 Animal advocates have been arguing for years that Lolita, the lone orca at the Miami Seaquarium, has spent decades living in a tank that’s far too small for her. While the U.S. Department of Agriculture (USDA) has historically maintained it’s legal, it looks like the agency might be changing its tune.

Lolita was once a wild and free member of the southern resident killer whales in the Pacific Northwest, but she was taken for public display in the notoriously brutal roundups that took place in the 1970s.

She has since spent almost 50 years at the Miami Seaquarium in the oldest and smallest tank in North America. How small is it, exactly? It’s this small.

The area she’s seen swimming in is 80 feet wide with 35 feet between the outer wall and the island barrier in the middle. She herself is long enough to stretch the full depth of the tank if she floats vertically. Not only does the tank just look too small for her, her advocates have continued to argue that it’s illegally small under the USDA’s standards for minimum size under the Animal Welfare Act (AWA).

Under the AWA, which is enforced by the USDA’s Animal and Plant Health Inspection Service (APHIS), a tank for an orca Lolita’s size should be 48 feet in each direction, with a straight line of travel across the middle, but her travel is blocked by the island, which also has gates on both sides.

This month, the USDA’s Office of Inspector General (OIG) released a report that “determined that APHIS has allowed an orca (Orcinus orca) to be kept in an enclosure which may not meet all space requirements defined by the agency’s AWA regulations,” mainly because of the island barrier.

Without the work island, her tank would be 60 feet by 80 feet, but as an obstruction, it leaves her with 25 feet less than the USDA’s measurement of 60 feet, and 13 feet less than what is required by law. Her tank may also be missing the mark on depth because the areas next to the island on either side are only about eight feet deep, and the Miami Seaquarium has completely failed to provide her with shade.

Although the report doesn’t specifically call out the Miami Seaquarium, or name Lolita, the diagrams of the tank in question that are included make it pretty clear that it’s referencing her and her tank.

The report builds on what her advocates have been saying all along, in addition to a conclusion recently reached by the Marine Mammal Commission, which previously stated, “All minimum space requirements should be met in an unobstructed manner, otherwise the definition of ‘minimum’ would be rendered meaningless.”

Unfortunately, the report doesn’t make any final conclusion about the tank, it only calls for clearer guidelines and procedures that can be used for inspections, but the USDA does have the authority to declare the tank noncompliant, which would make her presence there illegal.

It has also renewed calls to end her confinement, and retire her to a sea pen. While she may not be able to ever fully return to the wild, the Orca Network has an extensive retirement plan in place that involves sending her back to a sea pen in her home waters off the coast of Washington, where she would at least be able to experience the ocean and communicate with others of her kind.

The ultimate goal of the plan is to reunite her with her pod, but if she is unwilling, or unable, they have vowed to provide care for her for the remainder of her life.

We invite you to share your opinion whether dolphins and orcas should be kept in captivity? Please vote and leave your comments at the bottom of this page.

Hell No! Orcas and Dolphins do not belong in Captivity!
I want to smack the Stupidity out of the 5 voter’s that say Yes for them to be kept in Captivity.
Lets try putting those 5 people in the tank and have them train like monkeys and see how feel!
Pisses me the hell off to know that there are Monster’s out there we call Human Being.

Should people who think that it’s alright to keep these magnificent beings in such enclosures be required to live in their own bathroom with the rest of their family and friends – eating, sleeping, toileting, existing, day after day after month after year after year after year? Yes! Every last one of you ‘yes’ voters need to do this very thing for an entire month, then get back to us and let us know if you gained even a gnat’s ass worth of empathy for these sentient beings! Go incarcerate yourselves under such conditions and we’ll come study you!

Sequariums must adhear to legal rules and provide exceptionally good enviironments for all marine mammels.
The public should not be prevented from seeing and admiring these magnificant creatures. Aquariums that can not aford to maintain these animals should not be alowed to posess them. Animals in captivity do provide an opportunity for medical and emotional study that can not be obtained in the wild. Uneducated trainers should nnot be allowed close proxcimity and possible hazardous conditions to humans and whales.

What a Sad Shame to watch All of the Magnificent Beings trapped in a G-DAMN FISH BOWL!!!!!

Time to give Lolita her time in the ocean under the responsible loving care of Howard Garrett. She needs to feel the ocean and tides against her body and hear the sounds of her family. She truly has earned this beyond anything conceivable.

heartbreaking to see them swim in circles and not be able to escape to freedom! Greed plain and simple. And people who pay to see them need to open their eyes and heart.

My eyes reflect the blue of the sea
When they are in freedom, naturally
I can jump up so high
Chase and play
Catch my food
This is the dolphin way
But when in a small space
Entrapped and alone
Or even with others
All I can do is moan
The blue sea reflection
Flickers then dies
Lost in man’s deception
Why bother to try

I enjoy watching those trainers being killed by orcas!