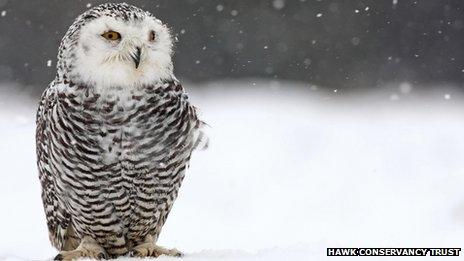 A rare sighting of a snowy owl has been made in the Cairngorms. The birds of prey are native to Arctic regions, including parts of Norway and North America. The snowy owl in the Cairngorms was seen on 18 February and reported on the nature website iSpot earlier on Tuesday. RSPB Scotland said that to see snowy owls in Scotland was rare. The last pair of snowy owls to breed in the UK was on Shetland in 1975.

A spokesman said: “I believe that over the years snowy owls have been seen occasionally in the Cairngorms during the summer months. “It is unusual to see one high up on the plateau during winter as there would be relatively little food for them – particularly up around Ben Macdui.”

He added: “Spotting a white bird like a snowy owl in such a extensive snowy landscape would be a quite a challenge.” In 2011, a male snowy owl appeared on the Western Isles for the eighth year running in a search for a mate.

The large white owl first visited the islands in 2003 and had previously flown around North Uist, Lewis, Harris and St Kilda. In 2008, birdwatchers’ hopes of snowy owls breeding in the UK for first time in more than 30 years were raised when the bird was joined by a female. However, the pair were later spotted 50 miles apart.

Makes one to wonder if they’re learning to fish!

Makes one to wonder if they're learning to fish!