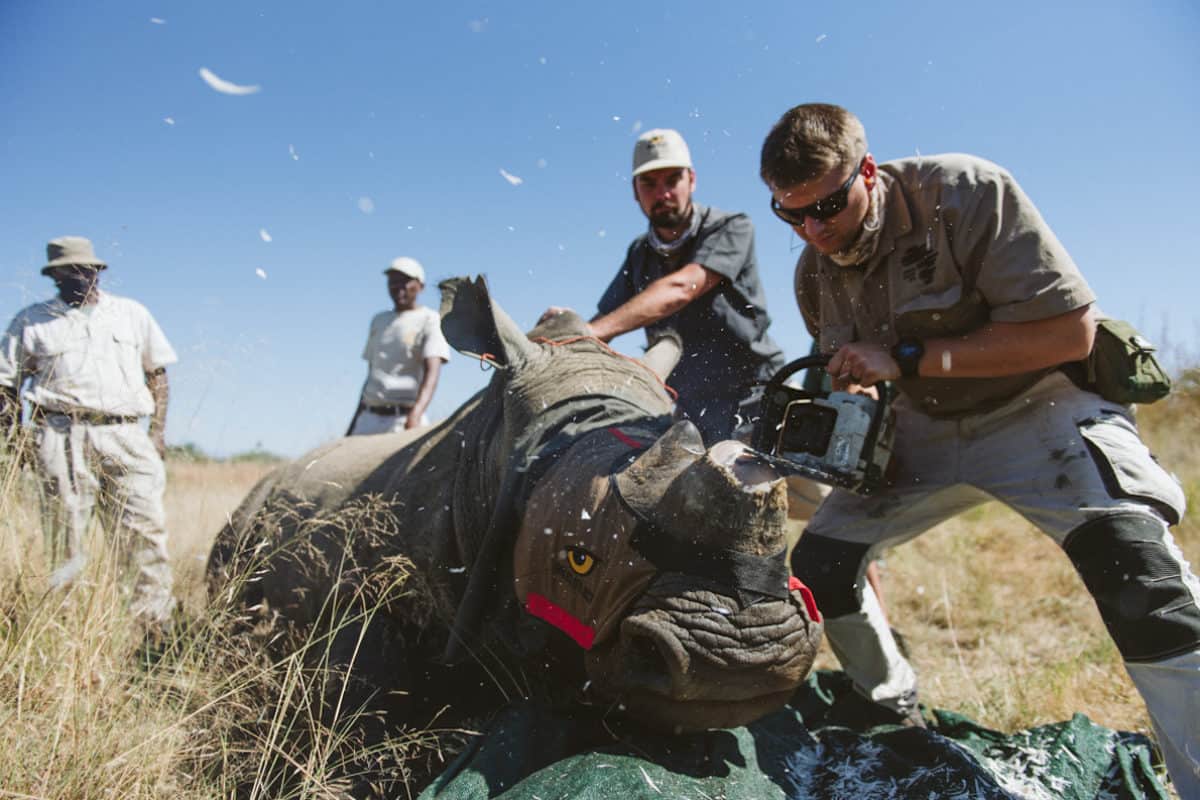 The team works quickly. As soon as a rhino is safely sedated, they motor up a chainsaw and begin shearing off the animal’s signature horns. White flakes of keratin fly through the air like snow, littering the ground. When they power the chainsaw off, only stubs are left where the rhino’s horns used to be.

“It is a traumatic experience for us — not for the rhino,” Mark Gerrard, managing director of Wildlife ACT, a nonprofit organization that works to protect wildlife, told Mongabay in an interview. “It has a face mask put on it to cover its vision, it has earplugs put into its ears … so that reduces trauma to the animal. We’ve got to remind ourselves that this [a rhino’s horn] is just keratin — this is really just fingernails.”

Gerrard says he can’t reveal the exact number of white rhinos in KwaZulu-Natal for security reasons. Still, he says there are a “significant” number of them in the area — and that poachers have targeted them in the past.

“By dehorning the animals, you’re reducing that incentive for poachers to come into reserve because effectively the reward that they’re going to get is much lower, or possibly zero, and yet they’re still incurring those same costs of coming into reserve and carrying out an illegal activity, and still obviously going against anti-poaching teams,” he said.

Rhinos use their horns for several reasons, including the defense of their territory, which is why it’s essential to dehorn the entire population, Gerrard says. That way, some rhinos won’t be given an unfair advantage over others.

“You have to do the vast majority of animals in any one area [otherwise] poachers will say, ‘OK, they’ve only dehorned one or two, but there’s many more out there that we can go for,” Knight told Mongabay in an interview. “So you have to go into it in a fairly well-organized way.”

Conservationists have been dehorning rhinos in KwaZulu-Natal since 2015, which has led to a significant reduction in poaching incidents, Gerrard says. But dehorning alone cannot protect rhinos — there also needs to be vigorous law enforcement and monitoring efforts, adequate fencing around the reserves, and ongoing education programs in the local communities, he added.

2014 was one of the deadliest years for African rhinos, with 3,000 poaching incidents recorded across the continent; 1,175 cases were in South Africa alone. But since then, rhino poaching in South Africa has steadily decreased, with only 594 rhinos killed for their horns in 2019 and 394 in 2020.

Elise Serfontein, founding director of the NGO Stop Rhino Poaching, says poaching incidents in South Africa went down during the COVID-19 lockdown, but increased as soon as the government lifted restrictions. She added that the country’s wildlife reserves are struggling to keep their animals safe and secure without the tourism revenue they previously depended on.

“We cannot let our guard down,” Serfontein told Mongabay in an email. “The kingpins and illicit markets are still out there, and even losing one rhino a day means that they are chipping away at what’s left of our national herd.

“I believe that dehorning is a good medium-term solution in combination with an effective security capability,” she added. “Yes, dehorned animals will still get poached, but the incentive is reduced. Reserves are doing whatever they can to keep their animals alive and we need to support their decisions and efforts.”

Knight is also supportive of rhino dehorning, but points out that it will need to be done repeatedly to maintain its positive effects. (It takes about 18 to 24 months for rhino horns to regrow.) Due to the cost of dehorning rhinos, it might only be possible to dehorn small populations, he says.

“Once you’re into it, you got to keep going — and you also have to advertise it,” Knight said. “You have to send out the word and say, ‘My population is dehorned, don’t bother coming here.’”

South Africa has the largest population of white rhinos in Africa, boasting more than 15,600 white rhinos based on a 2017 estimate.

That was also the year, South Africa made it legal to sell rhino horns within the country, a move criticized by some conservationists who said it would worsen illegal poaching. However, Knight says he does not think it is necessarily harming wild rhino populations in the country.

“It’s quite limited,” Knight said. “And who’s going to buy anyway? People may be buying for an investment in the future, but that’s a risk that one takes because it’s dependent upon international trade, and it’s at the moment, it’s illegal” to trade rhino horn internationally.

When asked how the dehorning effort’s success will be measured, Gerrad is definitive in his answer: “Zero animals poached.”

“Success for me would be in two years’ time [when] there haven’t been any poached animals in Spioenkop,” he said. “And I think more importantly, that success would be that the demand for rhino horn starts to decrease, so that in two years’ time we don’t need to dehorn again. But I think we’re not in that position right now.”