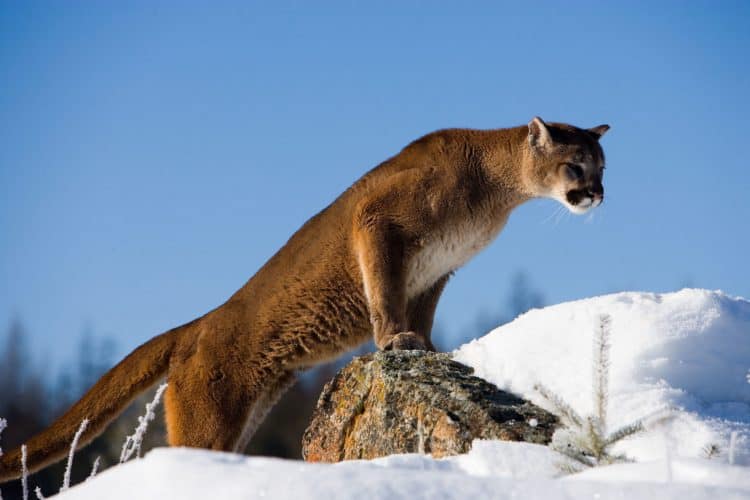 South Dakota has a notorious history of mismanaging its mountain lion population and playing into the hands of trophy hunters. In past years, the Mount Rushmore state has repeatedly increased its hunting quota for the animals, despite evidence that its lion population is on the decline.

But this week, the state surpassed its own sordid record when it voted to approve a trophy hunting quota of 60 mountain lions for both the 2019 and 2020 hunting seasons — a move that will put a whopping 30 percent or more of the state’s lion population under the gun.

The state’s Game, Fish and Parks Commission is not only continuing to trot out the tired old excuse of livestock conflicts – a rationale that has beendebunked by HSUS researchersand by scientists – but it is now also openly admitting that its new management plan allows for the greatest trophy hunting opportunity possible: the state’s plan this year lists maximizing “recreational hunting opportunities” as a primary objective for managing mountain lions.

The commission also voted to extend the hunting season by an additional month, through April of each year, and increased the number of permits in Custer State Park, where hunters can use hounds to hunt mountain lions. Hounding is a terrible practice, in which packs of dogs fitted with GPS collars track down, chase and corner a lion.

Minutes later, the trophy hunter arrives and shoots the animal at close range, usually off a tree branch or rock ledge. The dogs then pounce on her, sometimes finishing her off, leaving orphaned kittens to starve and die — deaths that are never counted. It’s the cruelest possible scenario, with no mercy for an innocent animal who’s simply trying to survive in the wild.

This year, for the first time, the commission also considered a proposal allowing trophy hunters from other states to come into South Dakota to kill its lions. Thankfully, it was not approved. Earlier this year, we reported that the same commission introduced an appallingly ill-conceived “Nest Predator Bounty Program,” which rewards residents with a $10 bounty for the tails of native wildlife species they’ve killed—and even provided thousands of free traps to aid in the killing.

The program recently wrapped up with a horrifying count of 54,460 tails of raccoons, opossums, red foxes, striped skunks and badgers. This mountain lion slaughter is just another example of the commission’s failure to manage its wildlife.

The majority of South Dakota’s mountain lions live in the state’s Black Hills, although these large cats are frequently shot and killed throughout the rest of the state, with unlimited hunting and no knowledge of the population size outside of the Black Hills.

According to the most recent population estimates, there are just 203 mountain lions old enough to be legally hunted now residing in the Black Hills. Hunting 30 percent of this population could not only threaten the survival of the species in the state, it can also worsen livestock conflicts.

Our experts have repeatedly presented the commission and state wildlife agency with numerous studies showing that hunting mountain lions, especially at such high rates, can increase conflicts with humans, pets and livestock.

When adult mountain lions are removed from a population, the disruption causes social chaos in their society and younger males, naturally less skilled at hunting, are more likely to be involved in human and livestock conflicts.

Nonlethal tools and strategies to protect livestock, such as penning animals at night and using light or sound deterrents, are far more effective than relying on hunting and predator control to manage mountain lions.

Mountain lions are a beleaguered species, and the threats against them, including habitat loss, poaching and hunting, are on the rise. A 2017 HSUS report found that trophy hunters have killed as many as 78,000 mountain lions in our country over the past three decades.

Hunting groups like Safari Club International have exacerbated the problem by promoting the killing of lions for trophies. The group’s award categories like the “North American 29,” “Cats of the World” and “Trophy Animals of North America” include mountain lions.

Methods used to kill them are among the cruelest: most mountain lions are killed either with the aid of hounds or by trapping with steel-jawed leg hold traps and wire neck or leg snares. Of the 14 states that allow the trophy hunting of mountain lions, 12 permit hounding.

Our nation needs to move away from such archaic and terrible practices. Instead of pandering to a handful of people who want to kill these beautiful animals for bragging rights, South Dakota wildlife officials should be working to find the best ways to preserve their precious native wildlife for generations to come. The path the state has now chosen leads nowhere beyond a trophy hunter’s living room.

This article was first published by A Humane World on 9 October 2019.