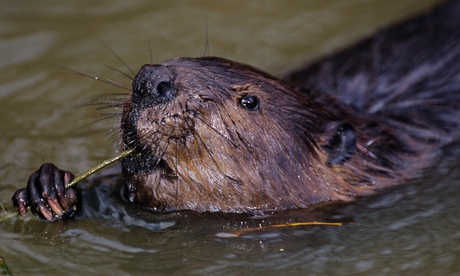 British people love wildlife, but the government, yet again, seems determined to show that it hates it. An opinion poll in Scotland found that 86% of respondents were in favour of reintroducing the beaver.

As most people seem to understand, it’s a magnificent animal which can enrich our lives and our countryside. It was once part of our native fauna, but was exterminated by hunting. It’s also a critically important species, essential to the functioning of aquatic ecosystems.

So when beavers were discovered, living and breeding on the River Otter in Devon, after they escaped from a collection somewhere, the public reaction was, overwhelmingly, delight. It’s the first population to live freely in England for hundreds of years.

The five-year Scottish Beaver Trial at Knapdale in Argyll has also been wildly popular, drawing in visitors from all over Britain, entranced by the prospect of seeing this wonderful creature spreading once more into its native habitat.

A couple of months ago, I visited Bamff in Perthshire, where beavers have been allowed to recolonise the valley of a small stream. The results are astonishing: a transformation from dull pastureland to a mosaic of ponds and marshes, little lawns (maintained by the beavers) and coppiced trees, swarming with life of all kinds.

In the evening, hiding under the trees, I watched the beavers, which are shy animals, emerging from their dams, swimming around the pools they have created, feeding and playing. I defy you to do the same without becoming entranced. Watching them turn from hippo to dolphin and back again as they moved between land and water, picking up hints about their elaborate social structures as they groomed each other and swam together, seeing them navigate the marshy maze they’ve built, I was overtaken by an awe and enchantment that I have seldom felt in this country.

So how does the government respond to this enthusiasm? “We intend to recapture and rehome the wild beavers in Devon,” says the environment minister, George Eustice. Why?

Before exploring this question, let’s consider for a moment the beaver’s remarkable natural history.

We don’t know exactly when the species became extinct in Britain, but in her book Beavers in Britain’s Past, Bryony Coles suggests that it might have persisted until the mid-18th century. Beavers were hunted to extinction for their beautiful warm fur, for their rich meat and for castoreum, the secretion from the scent sacs close to the tail, which was used for making perfume and medicines.

They once lived throughout our river systems: they were as much a part of the native ecosystem here as they are in Canada today. Beverley in Yorkshire, Beverston in Gloucestershire, Barbon in Cumbria and Beverley brook, which enters the River Thames at Battersea, are some of the places named after them.

The beaver is a keystone species. This means a species that has a larger impact on its environment than its numbers alone would suggest. They create the conditions that allow other living creatures to thrive.

By altering the structure of the rivers, creating dams and pools, riffle runs and ditches, they build the habitats that many other species need for their survival. They provide niches for water voles, otters, ducks, frogs, fish and insects.

In Wyoming, streams where beavers live harbour 75 times as many waterbirds as those without. The total weight of all the creatures living in the water may be between two and five times greater in beaver ponds than in the undammed sections.

Just as forests in Britain are desperately short of the dead wood that many species need, our rivers are desperately short of the submerged wood on which a wide range of aquatic life depends. The branches that beavers drag into the water provide shelter for fish, amphibians and invertebrates, and food for creatures such as freshwater shrimps, caddis larvae and water hog-lice on which many other species depend for their survival. Their dams help to hold back floods, prevent scouring and erosion and stabilise rivers’ banks and beds. They also filter out the sediments containing faecal bacteria, reducing the risks of contamination and disease.

In Yorkshire, where the town of Pickering has been repeatedly flooded, government agencies are now pulling woody debris back into the streams feeding Pickering Beck, to slow their flow, protecting communities downstream. This requires a good deal of expense. Beavers would do it for nothing – and keep doing it long after government funds dried up.

Beavers have been re-introduced in 161 places in 24 European countries. The results, of course, have been appalling. As the Agriculture and Rural Development Directorate of the European Commission notes:

By these was the third part of men killed, by the fire, and by the smoke, and by the brimstone, which issued out of their mouths.

Oh, sorry, wrong report. No, beavers have been welcomed back all over Europe. They are so widely-accepted and loved wherever they’ve been reestablished that proposals to remove them would probably cause a minor riot.

Here too many people are furious about the government’s decision, and a petition against it is rapidly gathering signatures. Please sign the petition now:

Save the free beavers of England

The government gives the following reasons for capturing England’s only free beavers:

Depending on the source of the animals, they could be carrying a disease not currently present in the UK. In addition, beavers have not been an established part of our wildlife for the last 500 years. Our landscape and habitats have changed since then and we need to assess the impact they could have.

Let’s take these one by one. The disease it’s referring to is alveolar echinococcosis, which infects animals and (less frequently) humans, and is caused by the fox tapeworm (Echinococcus multilocularis). It can be carried by many species. As the government says, the disease is not present in the UK, and it should certainly be kept out.

We don’t yet know where the Devon beavers (or their ancestors) originated. But there’s a straightforward, single-step test for determining whether or not they are carrying Echinococcus multilocularis: a DNA analysis of their faeces. It’s so accurate that you can detect the presence of the tapeworm from less than a single egg. In other words, you can discover whether or not England’s only free beavers are carrying the disease without having to capture them.

In the unlikely event that the tests prove positive, I would have no complaint about the beavers being trapped or killed – with the proviso that they were then replaced with a disease-free population, re-released into the River Otter. But if the tests prove negative, this excuse for rounding them up evaporates.

As for the claim that “Our landscape and habitats have changed since then and we need to assess the impact they could have”, Miles King has neatly swatted it on his excellent blog:

Sorry? Defra are suggesting that a once ubiquitous native mammal, which was hunted to extinction, might not fit into our modern landscape and habitats. Surely that’s a problem with our perception of landscape, not an argument for removing a native mammal. As for habitats, look at the equivalent habitats in Europe with beavers and compare them with the UK habitats without, then tell me we will be better off without them … The point is that beavers create habitats and public environmental goods that we have missed for the last 500 years; habitats that support a whole range of other species. Is it better to create a pond with a Hy-mac, or have a beaver create one?

When the given excuses fall apart so readily, we need to look for other explanations. One, perhaps, is this government’s obsession with control, and its apparent desire to imprison anything and anyone that does not conform to an ever narrower range of prescribed behaviour. Another is its determination to appease powerful interest groups, even if they carry almost none of the public with them.

In this case the group lobbying hardest for their removal is, incomprehensibly, the Angling Trust.

beavers have not been an established part of our wildlife for the last 500 years. Our landscape and habitats have changed since then and we need to assess the impact they could have.

Here’s what the trust said:

Although beavers were native to some parts of the British Isles more than 500 years ago, our rivers have changed dramatically in the past five centuries

When government departments uncritically repeat the claims of lobbyists, you know we’re in trouble.

I find the trust’s position astonishing. Throughout the period in which beavers last lived in Britain, almost all our rivers swarmed with vast runs of migratory fish such as salmon, sea trout, lampreys and shad. Giant sturgeon swam from the sea into the heart of Britain. Huge burbot lurked on the river beds. Today, burbot and sturgeon are extinct here and the populations of many other species, especially the migratory fish, have been greatly reduced.

Studies show that in both Sweden and Poland, the trout in beaver ponds are on average larger than those in the other parts of the streams: the ponds provide them with habitats and shelter they cannot find elsewhere. Young salmon grow faster and are in better condition where beavers make their dams than in other stretches.

The trust rightly points out that our rivers “suffer from endemic pollution, over-abstraction of water and the presence of tens of thousands of man-made barriers to fish migration.” It then claims that “beaver dams would only increase the number of obstacles that fish have to overcome.” But fish have been negotiating beaver dams for 200,000 years. Unlike many manmade structures, they are both low and permeable. In the rare cases in which they create a genuine obstacle, they can be removed in just a couple of hours.

Yes, there’s a problem with manmade structures impeding fish migration, so let’s campaign to remove or alter them wherever possible. But far from adding to the problems our native fish face, the net impact of beavers is greatly to reduce them, by creating the shelter, habitat and food sources that fish require.

The trust says we can afford to think about re-establishing beavers only when “good ecological status has been achieved in all catchments”. In other words – given the way things are going – never. But little would restore good ecological status to our rivers as rapidly as the return of this keystone species.

I’m an angler, and the Angling Trust does not represent me on this issue. I know others who are disgusted by the trust’s position, and it would not be surprising to discover that the majority of its members belong to the 86%. Most anglers, in my experience, have a powerful connection with nature. The chance of seeing remarkable wild animals while waiting quietly on the riverbank is a major part of why we do it.

When I visited Bamff in May, the pools and runs the beavers had created were stippled with rising brown trout, feasting on the resurgent insect life. Hawthorn flies and iron blue duns – species of great interest to anglers – clouded the air, in greater numbers than I’ve seen anywhere else in Britain. Why would people who fish not want this?

The Angling Trust and government ministers are making a terrible mistake here, as they would know if they had been to Bamff, or Knapdale, or any of the 161 places in which beavers have been introduced to Europe, and seen the remarkable and thrilling transformation taking place there.

This article was written by George Monbiot for The Guardian.