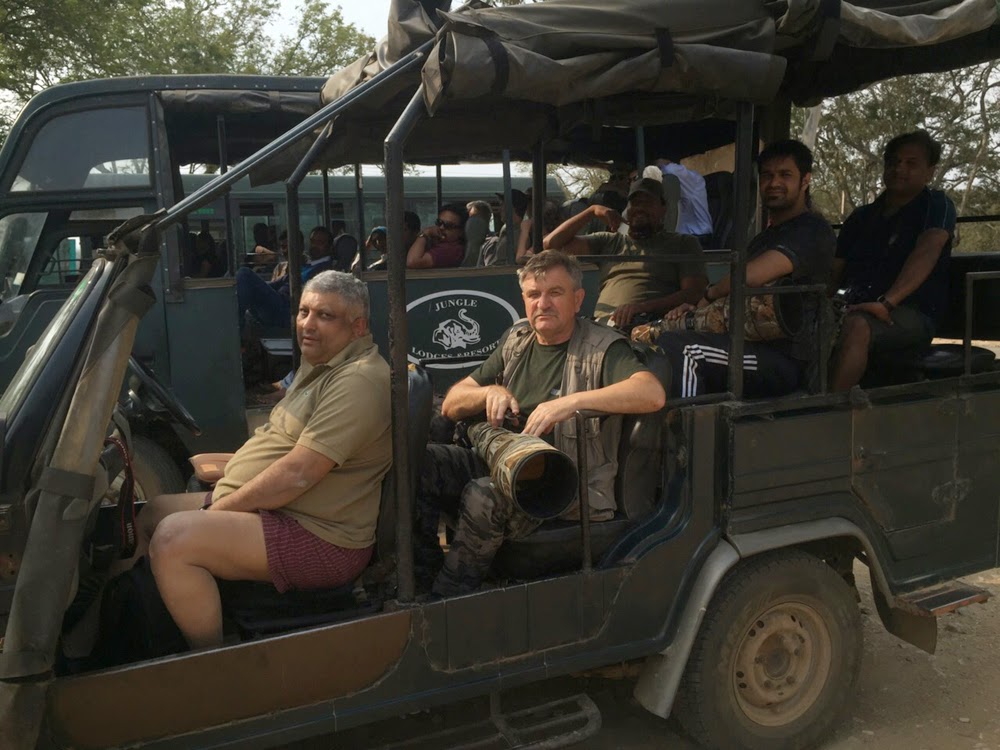 A big hello to my readers, its been long, really long since I posted here. This post is all about a three day stay followed by a one day round in Bandipur and Kabini respectively. I had the privilege of accompanying and guiding Alex who was visiting India purely for wildlife photography.

I wont be writing a lot here, but a few words here and there shouldn’t do anyone harm.

Anyway here goes, after the drive from Bangalore, we checked in at the Bandipur Safari Lodge and since we had an hour before lunch, we decided to drive down to the reception area in Bandipur in hope of a little birding. In fact we spent a couple of hours everyday here in between the safaris.

After lunch, we headed for our first where we spotted a few birds and spotted deer all over. As the light began to fade we were left with 15-20 min more in the forest. It was in those last few minutes that we came across this handsome male tiger cooling of in a water body.

Locally know as Prince, this guy is huge and does not shy away from the tourist vehicles. Anyway he did give us some good photography opportunity and Alex was really happy to have come across and photograph a tiger on his very first safari.

On the way back we came across the Forest Dept doing a great job with burning and creating fire lines to reduce damage due to forest fires.

After a quick meal we called it a day.

The next day started with me waking up late, and the last i think!! Anyway the morning safari was good in terms of spotting a leopard, we did miss getting a good photo of it, but nonetheless it was a good sighting. Here is a photo of it crossing in between the two safari vehicles.

Suddenly we heard some frantic spotted deer alarm calls and headed towards the water body from where it was coming, no luck, the predator must have just been passing by, but I did manage to make a quick video showing the alarm calling behavior of the spotted deer. (Video at the end)

The evening safari was good in terms of spotting a small heard of elephants and also a leopard, and yes we missed a great photo opportunity again, as we realized its presence on a tree only when we were right under it, having seen us it shied away from us dissapearing into the thick bushes. We did also see and photograph the Brown Shrike multiple times.

The next day we again had a mainly birding safari except for a wild boar sighting and pair of mongoose foraging for food.

After returning to the lodge and finishing our breakfast we headed to a nearby lake in search of the Bar-headed Geese that we had heard of, they had stopped over during their migration to the south. This time Rantel who was present during our safaris and staying at the same lodge also joined us.

We thrilled when we reached the lake, there were easily more than 100 bar-headed geese there along with some Rudy-shellducks and Northern Pintails. A few distant shots of them were all i could manage.

We drove down yet again to the Bandipur Reception area where I met a friend who told us a few birding locations, after driving for about 20 minutes, I spotted none other than our target bird hovering quite low, it was the majestic Black Eagle, a raptor not so easy to photograph, anyway all we could manage were a few shots of this bird in flight.

As the evening safari began, we were exited as we had found two sets of fresh pug marks, one of a female and the other of a male. We drove around quite a bit, but in vain, no cats were to be seen. We did find a few Crested Serpent Eagles and a beautiful Peacock on a nice open branch of which I made some photos.

After an early dinner we retired to our room and were deciding on where to head the next day after the Safari and checking out.

The last and final morning with only the leopard in our mind, yes the leopard, since we hadnt yet got a good photo of it from this trip, we headed into the forest for our final Bandipur drive. The safari turned out to be quite dry with a sighting of a White-eyed Buzzard in the distance. Returned to the lodge, packed our bags and checked out. We had had a great four day stay in Bandipur with some great sightings. The staff at the lodge was very helpful and friendly as ever and I cannot thank them more for their hospitality.

We decided to head to Kabini from Bandipur. We had already spotted the tiger and the leopard in Bandipur, but had missed out on the other carnivore from there, the Dhole, also known as the Indian Wild Dog. The Kabini evening safari gave some lovely opportunity to spend almost 20 minutes and photograph a pack of Dholes.

I must also mention that whenever we got a lot of opportunity to click baby Bonnet Macaques and Langurs, and below is one of my favorite photos ever, it shows the strong bond between the mother and the baby.

After this nice journey into the wild it was time to say bye to Alex as we was heading to Orissa for some birding with another friend of ours. I do have a lot many more photos from this trip which I will share in the days to come, I hope you enjoyed your visit here. For suggestions and feed back do use the comment form bellow.

For tailored wildlife photography trips please get in touch at: [email protected]

All Images are Copyrighted Angad Achappa and may not be used in any form, website or print/online media without written permission of the Photographer. For any inquiry for the photographs please contact: [email protected]