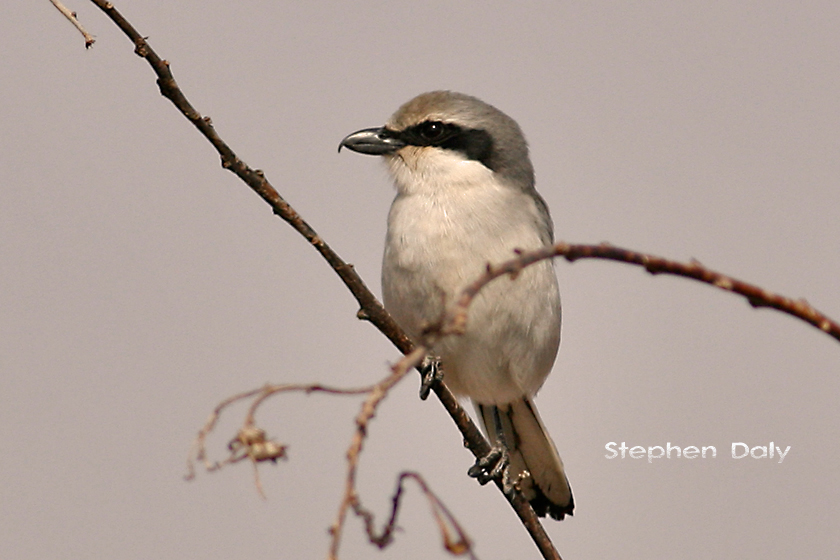 Fuerteventura 3rd-8th February 2013 – Day 1 – Sunday 3rd Feb – An early drive to Seville started extremely well with a fabulous view of an adult male Pallid Harrier crossing the road close to Vejer de La Frontera. White Storks have already taken up their nest sites on electric posts and were warmly lit by the early sunshine. We passed a small group of Glossy Ibis and a few Common Buzzards were seen en route.Flights to Gran Canaria and a local transfer to Fuerteventura went smoothly, then collected the rental car we arrived at our hotel mid-afternoon after stopping to watch a Common Buzzard of the Canary Islands race insularum. Some Ravens, Spanish Sparrows and good numbers of Yellow-legged Gulls were also seen.

We took a walk around the village and saw Great Grey Shrikes, some Berthelot’s Pipits. The island plants and sparse vegetation is always interesting to study in such a harsh and parched environment. The island doesn’t get much rainfall, having no large mountain range to collect and water-filled clouds that predominantly come from the north. The weather was quite cold and a stiff breeze was blowing from the north and there wasn’t much happening bird wise as the sun began to set.After a hearty meal we retired for the night, hoping for warmer weather.

Day 2 – Monday 4th Feb – It doesn’t get light until around 07:30hrs on Fuerteventura in early February and after breakfast we headed south to try and limit the effect of the strong northerly wind.The birding grapevine was still telling us that three Olive-backed Pipits from Asia were still to be found down in the south around Costa Calma. En routs we saw a dashing Barbary Falcon.

On our arrival we parked and searched the narrow strip of woodland looking for any birds. Failing to see the Pipits we did however find a small group of six Siskins and a pair of Bramblings, both species being rare on the Canary islands. Goldfinches and Common Linnet were also seen.After a coffee we took the road to Betancuria, spotting a single Barbary Partridge flying in across the road. The wind was still very strong as we stopped to watch Barbary Ground Squirrels, Berthelot’s Pipits, Spanish Sparrows and Ravens at the top of one of the mountain peaks.

We took a lunch of mixed tapas lunch at Betancuria the took a walk looking along the barranco and agricultural areas finding Sardinia Warbler, Common Kestrel, Blue Tit (African race) and Hoopoe.Driving up to Tendaya we took our time outside the village searching and scanning across the rocky landscape for more birds. Soon we spotted small groups of Houbara Bustards at first in the near distance and then others very close to the road. We saw fourteen birds in total and all had excellent views of this wonderful bird.

Cream-coloured Coursers were next to be seen and although the birds were running through the rocks then stopping (as they do!), their soft peach color blending in with the shadows, hues and subtle color tones of the volcanic landscape. We did manage to get good scoped views of these special birds.

Later in the late afternoon we walked across to a small reservoir finding Lesser-short toed Larks, Spectacled Warblers and a pair of Fuerteventuran Chats. A single Little-ringed Plover, a female Ruddy Shelduck and one Grey Heron flew off from the site and a lovely male Yellow Wagtail fed with a White Wagtail along the water’s edge. A Common Buzzard was also seen perched nearby. As the dust filled air shrouded the setting sun, we headed back to our hotel near La Oliva and took dinner in the restaurant.

Day 3Tuesday 5th Feb.Despite a windy start to the morning after a calm at first light we drove off south again after breakfast.Before exploring the shore line at Las Salinas we found some Black-tailed Godwits and a single Whimbrel on the nearby golf course. The shore around Las Salinas threw up a few more waders including Ruddy Turnstone and more Whimbrels. Yellow-legged Gulls were common a we watched a single Ruddy Shelduck flying over from the direction of the nearby barranco.

Totoiseshell Butterflies were seen as were some fascinating striped Hover Flies feeding on cactus flowers.A few Common Kestrels and a pair of nesting Common Buzzards flew along the gorge one carrying nesting material. Spectacled Warblers and Fuerteventura Chats showed themselves and a few Trumpeter Finches flew past. Rock Doves were plentiful and a distant adult Egyptian Vulture surveyed us from on high. Barbary Ground Squirrels ran throughout he rocks and there was a good number of Painted Lady Butterflies and a good number of Vagrant Emperor Dragonflies were around.

Some Lesser Short-toed Larks and also flew over or were heard calling from the nearby fields. House Martins came along the ridge and they were accompanied by two Red-rumped Swallows.We travelled a bit inland finding a small reservoir that held some water. Along the fringes we saw Black-winged Stilts, Greenshank and Little-Ringed Plover. Five to so Moorhen walked off as we approached closer to the site and a single Common Snipe flew off. On the water a pair of Ruddy Shelducks were watched and another Greenshank was seen with White Wagtails and more Black-winged Stilts. Some Hoopoes were calling from distant palm trees and Berthelot’s Pipits were singing from electric wires. 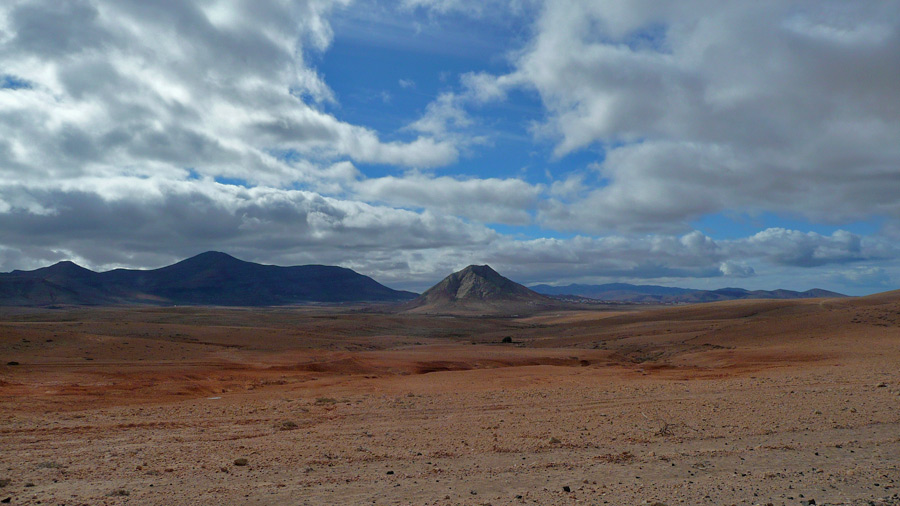 We took lunch at a great restaurant and later watched some Egyptian Vultures wheel across the sky while Cream-coloured Coursers ran in the distance blurred by the increasing heat-haze.We travelled a short distance to another open landscape with a goat farm and adjoining earth workings where to our delight we watched a group of eight adult and juvenile Egyptian Vultures rise out a Barranco and fly towards our group.$

Some of the vultures alighted atop of some bare palms trees.As we travelled down a track to the disused earth workings we spotted a pair of Black-bellied Sandgrouse very close to the track and a little further saw a group of seven birds feeding.Heading back to our hotel we spotted five Barbary Partridge and quite a few Great Grey Shrikes to add to the days tally. A Barn Owl Was heard calling from close by as we lay in bed.

Day 4.Wednesday 6th Feb.It was overcast in the morning and the temperature hadn’t really increased at all. The dust that had been coming in from the Sahara had thankfully died down and the skies were clear once more.After breakfast we took a look at the La Oliva agricultural areas finding few birds apart from Berthelot’s Pipit and Rock Dove.Driving north to the dunes park we found Lesser Short-toed Larks, more Berthelot’s Pipits and some Common Buzzards. A few Egyptian Vultures were seen flying or perched and at the rocky shoreline two Common Terns passed with some Sandwich Terns.We took lunch of Paella at El Cotillo then scoured the tracks and coastline south of the town for Houbara Bustards and Cream-coloured Coursers to no avail. The largest birds we saw were two F18 fighter jets that came in quite low close to the coast!Changing tactics we drove to the Los Molinos area and had views of Black-bellied Sandgrouse and Trumpeter Finch. Ruddy Shelduck were seen in various locations and at the Barranca we found quite a good number of new species that included Grey Wagtail, Common Snipe, Redshank, Greenshank, Green and Common Sandpipers, Ring-necked Duck, Tufted Duck, Widgeon, Northern Shoveler and Sand Martin.A pair of Common Buzzards came in a wheeled above the rocky gorge and then landed to mate on the ridge. Ruddy Shelduck and Coot were the commonest birds on the water at the reservoir and the mixed waders flew around feeding on the soft muddy banks.It was getting dark when we arrived back at our hotel and we took a light meal feeling still quite full after our Paella at El Cotillo!Stone Curelews could be heard calling during the night.

Day 5.Thursday 7th FebOnce again the strong cold air from the north made it unseasonable weather With our fleeces on we left after breakfast to check one or two areas for Sandgrouse and Bustards.

Descending towards the coastal stretches f the west we came across several Houbara Bustards feeding and preening very close to the road. Using the car as a hide we quietly watched them for some time. Black-Bellied Sandgrouse were seen in moderate flocks, often silhouetted against the ocean. Better looks at Lesser Short-toed Larks and Trumpeter Finch was next up and Common Linnets also flew around in the company of the charming Berthelot’s Pipits.

We took a walk along the headland after catching up with Spectacled Warblers that called from some scrubby desert thorns. House Martins and Barn Swallows flew overhead and a few Pallid Swifts crossed the open sky above our heads. Ravens chased a pair of Egyptian Vultures bringing nesting material to their cliff nest site as Lesser-Black-backed Gull and Yellow-legged Gulls passed by.

Our next treat was a pair of Barbary Falcons that were seen on the black volcanic cliff face. Moving slowly a little closer we managed to get excellent views of these dashing falcons that look at first glance very similar to Peregrines.Walking back to the car we travelled on to Pajara for lunch.We took a trip down past Costa Calma to Morro Jable to drop off Yeray who was catching the ferry to Gran Canaria. After saying our farewells we stopped to watch the numerous Monk and Rose-ringed Parakeets that have taken up residence in this busier tourist resort on the south-west sandy coast. After a coffee we set off to Costa Calma to look one more time for the Olive-backed Pipits and managed to find one! A Common Chiffchaff was another bonus and as the sun started getting low in the sky we headed back to our hotel at La Oliva.
Thank you to all who took part in this tour. We managed to see everything we came to the island for and despite the unseasonably cool temperatures and Saharan dust or Calima, we had a great time on Fuerteventura and I’m sure we’ll see some of you again the future.