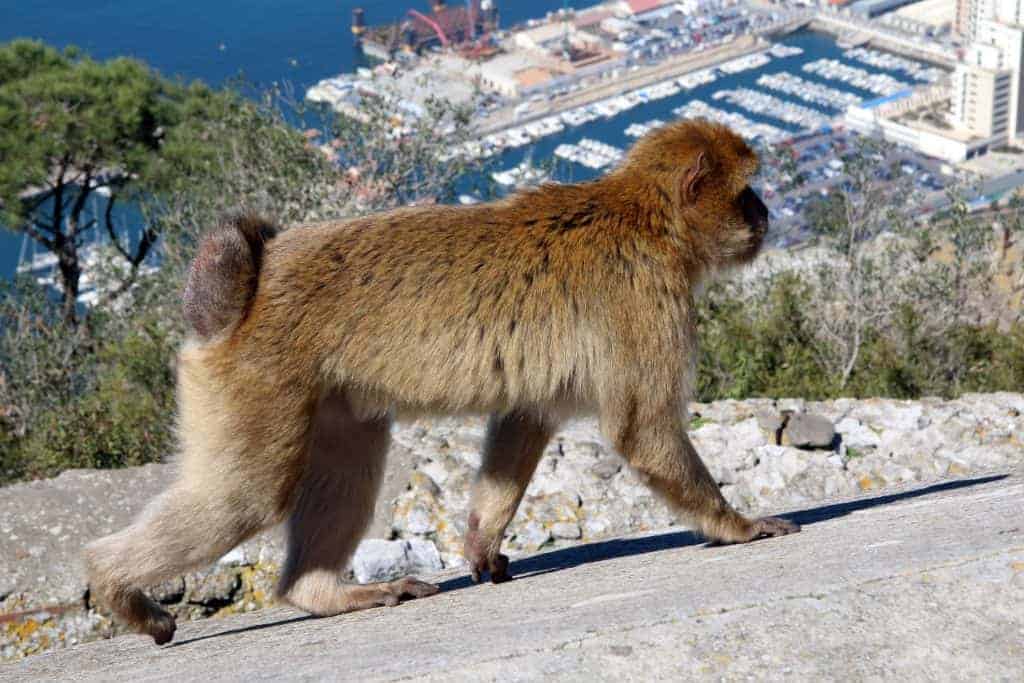 Conservation groups from around the world have come together to save the famous monkey from being exploited by the wildlife trade.

Gibraltar’s famous ape is really a Barbary macaque, the only primate found north of the Sahara with a home range across Morocco, Algeria and Gibraltar, where it is said that Britain’s outpost will fall if they ever disappear.

While Gibraltar’s colony is flourishing, the ape’s North African cousins are being exploited for the pet trade and as photographic props.

Today, a coalition of wildlife and conservation organisations joined forces with Morocco and Algeria to get greater protection for Barbary macques at the Convention on International Trade in Endangered Species (CITES) global summit.

Latest figures show how Barbary macaque numbers have plummeted over the past three decades from 23,000 to as few as 6,500, with most in the cedar forests of Morocco and Algeria.

The ape’s biggest threat is the illegal capture of young animals for Europe’s pet trade or to be used as props for tourist photographs.
It is estimated that as many as 3,000 Barbary macaques are being kept as pets by Europeans, about 10 times the number of apes on Gibraltar.

Ironically, Winston Churchill ordered that macaques be brought on to the Rock from Morocco and Algeria during the Second World War in keeping with the legend that there will always be a British presence as long as the apes survived. Gibraltar’s apes were first brought over by the Moors around the 8th Century.

Now the fight has started to keep the apes in their high altitude North African forest haunts where they live in highly social troops of up to 80 individuals, seeking out fruits and plants. They are described as highly intelligent, emotional and sensitive animals with a lifespan of up 22 years.

To safeguard their future, the North African range states and a coalition of 10 campaigning groups are calling for the macaques to have their conservation status upgraded from CITES Appendix II to Appendix I, the highest level of protection from being traded.

Among the groups campaigning for the Barbary macaques at the Johannesburg summit are the International Fund for Animal Welfare (IFAW) and Animal Defenders International (ADI).

“This truly unique and endangered primate species needs all the protection we can provide as an international community,” said IFAW’s Rikkert Reijnen. “The highest possible protection from CITES will strengthen conservation efforts underway to help the Barbary macaque survive and thrive. It makes total sense to support the range states, Morocco and Algeria, in this goal.

ADI president Jan Creamer added: “The illegal trade is pushing Barbary macaques to the brink and action must be taken before it is too late. Like so many wild animals, these little monkeys are paying the price for unscrupulous traders bartering with their lives.”

Well known musician Moby has been backing ADI in its efforts to save the macaques. He said: “I refuse to stand by and do nothing as these endangered monkeys are snatched from the wild and their families for photo props and the pet trade.

“Barbary macaques need our urgent help and I hope governments will join ADI and ‘back the macaque’ and grant them the greater protection they need.”

Besides being a route to ship macaques, North Africa is also the gateway for other illegal wildlife products and live animals to be smuggled into Europe. Cracking down on the macaque trade will also help protect other creatures such as endangered tortoises.

This article was first published by The Express on 27 Sep 2016.