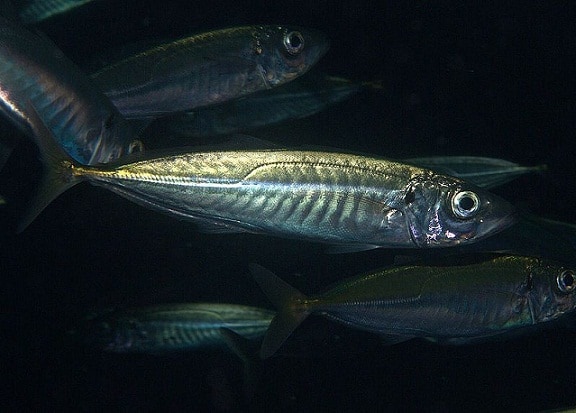 A few clear steps could provide hundreds of millions of hungry people around the world with a nutritious, protein-rich meal of wild seafood, like this mackerel. In a recent interview with Coast magazine, Oceana CEO Andy Sharpless discussed his new book, The Perfect Protein. While the phrases “saving our oceans,” and “feeding the world,” may feel nebulous and, frankly, overwhelming, Andy used this interview to break these overwhelming ideas down into clear, straightforward points.

“So, if you go into McDonald’s and you’re choosing between a fish filet sandwich and a hamburger, you can make a decision that has a bigger impact on the world, and yourself, than people appreciate,” says Sharpless. “If you eat the hamburger, you’re eating enough grain to make more than 200 taco shells and you’re consuming enough fresh water to fill more than 10,000 glasses. If you eat the fish filet sandwich, you’re not.”

3,500 ::To produce one pound of beef, it takes 3,500 gallons of freshwater and 13 pounds of grain.2,500 ::To produce one pound of pork (the world’s most popular meat), it takes 2,500 gallons of freshwater and 6 pounds of grain.2,000 ::To produce one pound of chicken, it takes 2,000 gallons of freshwater and 2.3 pounds of grain.2,700 ::Currently, we have the ability to feed the world. Add up all the world’s food and divide it by the number of people on Earth and each person would have 2,700 calories a day.64% ::The UN estimates that by 2025, 64% of the world will live in water scarcity.1 Billion ::Although we have plenty of food, because most food goes to wealthy nations, 1 billion people go hungry while another billion are obese.30% ::Scientists now agree that consuming omega-3-rich seafood two times a week can cut your chance of dying from heart attack by 30%.0 ::Amount of arable land wild seafood takes up.700 Million ::If properly managed, our oceans could provide a meal a day for 700 million people.5 to 10 ::Many fish populations are incredibly resilient, so many fisheries can rebound from depleted to robust in just five to 10 years with sound fishing practices.25 ::Just 25 countries, including the European Union, control 90% of the world’s wild fish catch, meaning reversing overfishing is completely doable.50%+ ::More than half of the world’s crop yields – mainly corn, rice, wheat, and soybeans – are used to feed livestock, not people.60 Million ::That’s the amount of people one scientist estimated we could feed with the grain saved from reducing meat production in the U.S. by just 10%.70% ::Global agriculture uses 70% of the world’s freshwater and is the single largest source of greenhouse gases.7 Billion ::World population is growing faster now than any time in history, passing 7 billion in 2011, a mere 12 years after hitting 6 billion.9 Billion ::The UN estimates that 9 billion people will inhabit Earth by 2050, and the Food and Agriculture Organization (FAO) says demand for food will increase 70% above today’s levels.