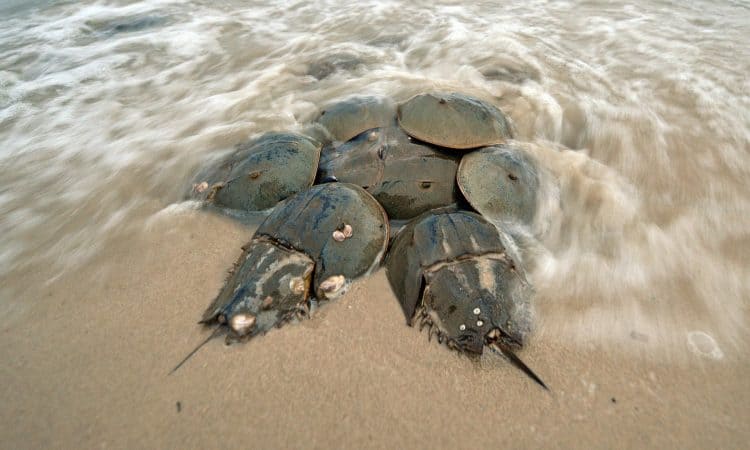 Few people in the world are aware their wellbeing may one day depend on a blue-blooded crab that looks like a cross between the facehugger from Alien and a gigantic louse. Fewer still realise this ancient creature now faces its greatest threat in more than 450m years.

The American horseshoe crab outlived the dinosaurs and has survived four previous mass extinctions, but is now menaced by the pharmaceutical industry, fishing communities, habitat loss, climate change and, most recently, choking tides of red algae off the east coast of the United States.

Abundant three decades ago, this living fossil was put on the vulnerable list by the International Union for the Conservation of Nature in 2016. Scientists say the crab’s decline symbolises the huge economic and health costs of biodiversity loss worldwide.

This will be underscored by a UN report this month that will show humanity is running down the natural capital of the Earth at a “startling” rate. Since 1992, more than 30% of the planet’s ecological wealth – the estimated value of species, forests, rivers and soil – has been lost, with profound consequences not just for conservation but for the health and wellbeing of hundreds of millions of people.

To address this, many wildlife campaigns focus on pandas, tigers and other cute megafauna, but the biggest economic damage is being done to less charismatic species such as insects, worms, plants, fish and crabs.

The copper-based blood of the horseshoe crab contains the most sensitive indicator of bacteria ever discovered, limulus amoebocyte lysate. The lysate is vital to identify contaminants in medical equipment ahead of surgical operations, pacemaker fittings and many vaccinations.

Such is the demand that processed lysate from the crab’s blood is now, gram for gram, one of the most valuable liquids on Earth, with a reported price between $35,000 and $60,000 per gallon.

US pharmaceutical companies catch more than 430,000 of these creatures each year, puncture the shell near the heart, harvest 30% of the blood, and then return them to the wild. Studies show that between 5% and 20% die in this process and surviving females find it more difficult to breed.

Far more are killed by bait collection, and the population has also declined as a result of coastal development and global warming.

The creation of protected areas and the introduction of bait harvesting limits has helped populations partially recover in Delaware Bay, but the harvesting has moved to other areas such as New England. Scientists predict horseshoe crab numbers off the east coast of the US will decrease by 30% over the coming decades. The fall of its three Asian subspecies is forecast to be even more rapid, because the crabs there are sold for food after the blood is harvested.

Mike Schmidtke of the Atlantic States Marine Fisheries Commission said the main problem for the crabs was the decline in the quality or availability of the beaches they use for spawning.

Critics say regulatory bodies are too closely connected to the pharmaceutical industry, which is hampering efforts to limit catches.

Biomedical companies are also trying captive breeding and the development of a synthetic substitute for lysate, but they are yet to win approval for these tests from the US Food and Drug Administration.

Thomas Novitsky of the Horseshoe Crab Conservation Association said lab alternatives would have a negligible impact. Better, he said, was an improvement in harvesting practices, stronger habitat protection and tighter restrictions on the use of the crab as bait.

The biomedical industry, he said, overstated the importance of the lysate, which exploits the horseshoe crabs to monitor drug quality and production cleanliness. “Their profits are enormous and they support little or no conservation efforts,” he said. “Economic growth, profit and immediate ‘benefit’ for humankind always seem to win out over sustainability and environmental protection, which is the insurance for our future.”

New threats continue to emerge. For much of this year, fertiliser run-off along the coast of Miami has created vast carpets of algae that suffocate or poison marine life. During these prolonged red tides, biologists, volunteers and fishing captains have reported many dead crabs, including horseshoe crabs of all sizes.

“Presumably the toxins cause stress, and the extremely low levels of oxygen in the water cause the mortality,” said Claire Crowley of the Fish and Wildlife Research Institute. “We have seen this in stone crab population within this area. While stone and horseshoe crabs have the capacity to move, it is likely not fast enough to escape these conditions.”

A detailed survey will be completed in spring 2019. But the fate of the horseshoe crab is part of a wider picture of natural decline of most wild species across the world. The upcoming UN report says 30% of the world’s natural capital has been lost since 1972, which is a source of economic as well as environmental concern.

“The report has startling findings with strong implication for conservation and development policies,” wrote Pushpam Kumar, the UN chief environmental economist, ahead of the report’s publication.

The danger, he said, is that the world is now destroying natural wealth created over millions of years to generate short-term income.

Despite such warnings, species such as the horseshoe crab are coming under ever-greater pressure. Human longevity is increasingly reliant on medical implants and the risks of septicaemia is growing as microbes become more resistant to antibiotics. That will mean more contamination tests and consequently, more harvesting of blood from horseshoe crabs.

This article was first published by The Guardian on 3 Nov 2018.